How to stop drinking: 27 different studies show why AA is so effective

"If you are struggling, it's a wise place to reach out for help." 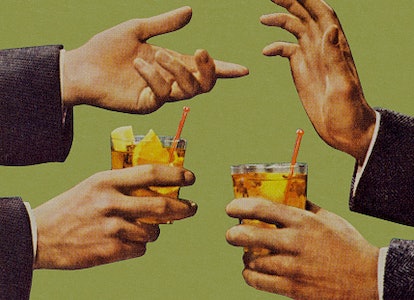 More people turn to Alcoholics Anonymous (AA) — the popular yet controversial group — than any other treatment for alcohol use disorder. And according to the most rigorous research review on the organization to date, AA's popularity is based on real results.

When compared head-to-head, AA is the most effective path to abstinence, over other common interventions like psychotherapy, the review suggests. The study authors theorize this effect materializes because AA is based on social interaction, which fosters long-term participation.

The review, published Wednesday in the Cochrane Database of Systematic Review, demonstrates that AA is a “legitimate, evidence-based resource,” Keith Humphreys, a co-author of the review and psychiatry researcher at Stanford University, tells Inverse.

“That doesn't mean it works for everyone because nothing does,” Humphreys explains. “But it does mean that if you are struggling, it's a wise place to reach out for help.”

The review adds to the decades-long debate over AA's effectiveness and suggests AA is a worthwhile tactic to get — and stay — sober.

“It's the most affordable, cost-effective resource there is," Humphreys says.

How AA compares to other therapies

While the organization is incredibly popular — it’s estimated one in 10 Americans has attended an AA meeting — past research hasn't indicated exactly why or how it helps people stay sober.

Popularity, Humphreys points out, doesn't mean that a service is actually effective. Humphreys says that, as scientists, he and his team felt they "had an obligation to subject AA to a rigorous test of effectiveness," especially because AA is "the most widely sought source of help for drinking problems."

So, to see how AA stacks up against other common alcohol misuse treatments the team analyzed 27 studies on the topic, representing 10,565 study participants. They included studies that compared AA to other 12-step programs, cognitive-behavioral therapy (CBT), motivation enhancement therapy (MET), educational programs around addiction, relapse prevention skills building, and no intervention at all.

The researchers looked at the length of time participants abstained from alcohol, the amount they reduced their drinking, if they continued drinking, the consequences of their drinking, and health care costs, after participating in each intervention. The studies followed up on participants for a year after they completed a program on average, while some tracked outcomes for five years.

Analysis of the data suggests that AA, as well as other 12-step programs, is significantly better at helping people abstain from alcohol than other interventions or no intervention.

An average of the studies included in the analysis suggests that 42 percent of people participating in AA would remain completely abstinent one year later, compared to 35 percent of participants receiving other treatments including cognitive-behavioral therapy. The studies on AA ranged from focusing on participants who participated in a single session to attending weekly.

Twelve-step programs, which adopt some of the principles of AA but are delivered by clinicians, also kept people “on the wagon” better and longer than other treatment approaches.

When it came to studies that factored cost into the equation, most showed "substantial" savings associated with AA participation. For example: Analysis of a 1997 study showed that AA and 12-step interventions reduced healthcare costs over two years by over $10,000 per patient (with 1994 figures converted to 2018 U.S. dollars), compared to CBT interventions.

AA premiered in 1935 in Akron, Ohio, when a stockbroker, Bill Wilson, and a surgeon, Bob Smith formed a support group in a united quest to get sober. A few years later, Wilson outlined a 12 step doctrine to achieve sobriety based on his own experience, including actions like conducting a “fearless moral inventory of ourselves” to turning "our will and our lives over to the care of God as we understand Him."

"I think there is a natural suspicion of health resources that don't emerge from the health care system."

Since then, the 12 steps have gone through some minor tweaks to alter some of the Christian overtones (including changing God to a "higher power"). Now, AA is available across 180 countries, includes over 2.1 million active members who belong to an estimated 125,352 groups, according to AA internal tallying.

This new study notes that despite its popularity, at times AA is dismissed by health professionals and laypeople alike for its lack of professional leadership and spiritual elements.

Humphreys puts it plainly: “I think there is a natural suspicion of health resources that don't emerge from the health care system, partly out of caution and partly out of snobbery.” Health professionals often ask, "Who do these people think they are?”

Why AA can work

The secret to AA’s widespread success may have nothing to do with its spiritual dimensions and everything to do with the social dynamic it precipitates, Humphreys' study suggests.

Meetings bring people together, create a chain of accountability, and a unified sense of purpose. Even after people’s 12 steps are over, they can return to meetings, sponsor other members of the group, and develop relationships with other people in recovery.

“Doctors care about their patients, but they can't become their friends and be there for them for years the way fellow AA members can,” Humphreys says. “This is important because alcohol addiction is a chronic disorder that can take years to arrest.”

Meetings are free, conducted regularly, and are widely accessible. AA takes an “enormous burden” off health care systems, Humphreys explains, by taking care of people's needs in free mutual help groups. In the long run, the research suggests AA could save individuals and the economy millions in health care costs linked to harmful drinking patterns.

“You can easily pay $100 or $200 dollars for a psychotherapy session but in AA people throw a buck into a basket, and even that is optional,” Humphreys says.

Humphreys suspects that this study might prompt health professionals to become more comfortable recommending AA among other options.

“There are many pathways to recovery, and AA is clearly one of them, but not the only one,” Humphreys says. “Everyone needs to find a pathway that works for them.”

Background: Alcohol use disorder (AUD) confers a prodigious burden of disease, disability, premature mortality, and high economic costs from lost productivity, accidents, violence, incarceration, and increased healthcare utilization. For over 80 years, Alcoholics Anonymous (AA) has been a widespread AUD recovery organization, with millions of members and treatment free at the point of access, but it is only recently that rigorous research on its effectiveness has been conducted.

Data collection and analysis: We categorized studies by: study design (RCT/quasi-RCT; non-randomized; economic); degree of standardized manualization (all interventions manualized versus some/none); and comparison intervention type (i.e. whether AA/TSF was compared to an intervention with a different theoretical orientation or an AA/TSF intervention that varied in style or intensity). For analyses, we followed Cochrane methodology calculating the standard mean difference (SMD) for continuous variables (e.g. percent days abstinent (PDA)) or the relative risk (risk ratios (RRs)) for dichotomous variables. We conducted random-effects meta-analyses to pool effects wherever possible.

Main results: We included 27 studies containing 10,565 participants (21 RCTs/quasi-RCTs, 5 non-randomized, and 1 purely economic study). The average age of participants within studies ranged from 34.2 to 51.0 years. AA/TSF was compared with psychological clinical interventions, such as MET and CBT, and other 12-step program variants.We rated selection bias as being at high risk in 11 of the 27 included studies, unclear in three, and as low risk in 13. We rated risk of attrition bias as high risk in nine studies, unclear in 14, and low in four, due to moderate (> 20%) attrition rates in the study overall (8 studies), or in study treatment group (1 study). Risk of bias due to inadequate researcher blinding was high in one study, unclear in 22, and low in four. Risks of bias arising from the remaining domains were predominantly low or unclear.

Authors' conclusions: There is high quality evidence that manualized AA/TSF interventions are more effective than other established treatments, such as CBT, for increasing abstinence. Non-manualized AA/TSF may perform as well as these other established treatments. AA/TSF interventions, both manualized and non-manualized, may be at least as effective as other treatments for other alcohol-related outcomes. AA/TSF probably produces substantial healthcare cost savings among people with alcohol use disorder.

More like this
Mind and Body
Jan. 30, 2023
Swapping Cigarettes for Vaping May Help You Quit — but There’s a Catch
By Elana Spivack
Mind and Body
Jan. 23, 2023
Can spicy food boost our gut health? Here's what the science says
By Katie MacBride
Science
Jan. 21, 2023
A deadly fungal plague swept the world of The Last of Us — is it realistic?
By Tara Yarlagadda
LEARN SOMETHING NEW EVERY DAY.
Related Tags
Share: