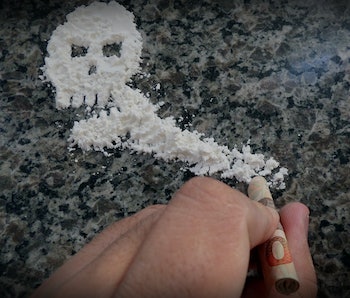 If we learned anything from the classic drug film Trainspotting, it’s that beating addiction is no joke. It takes a lot of time and a lot of resources and could involve the occasional baby hallucination. And unfortunately, our attempts to overcome it often fail. New research focusing on the unconscious memories associated with addiction, however, might make it a whole lot easier to get clean.

Researchers at the University of Texas at Austin have just reported that they’ve found a way to treat cocaine and alcohol addiction in rats with a drug that’s already been approved by the FDA to treat high blood pressure. If it’s shown to have the same effects on human addicts, it’s well on its way to becoming an accepted treatment.

The work, led by Associate Professor of Neuroscience Hitoshi Morikawa and published in the journal Molecular Psychiatry, rests on the idea that addiction isn’t simply a physical craving that can be controlled by willpower. It’s a much more complicated beast, involving the unconscious memories addicts make in the events leading up to addiction. The sights, sounds, people, and places they unknowingly associate with drug experiences all play a big role — and could be responsible for triggering relapses.

In studies using rats addicted to blow or booze, Morikawa used a drug commonly used to treat hypertension called isradipine to effectively end their environmental associations with their drug of choice. In a nutshell, the rats were trained to equate either a black- or white-painted room with receiving the drug, and later, when given the choice between either room, the rats would always pick the drug room. But when they were given a high dose of isradipine, the rats would ‘forget’ their association the next day, and that memory loss persisted, it seems, permanently. “The isradipine erased memories that led them to associate a certain room with cocaine or alcohol,” explained Morikawa.

What does a hypertension drug have to do with drug addiction? Turns out that the ion channels that isradipine is used to block in the heart are also present in the brain. The researchers found that when they block the brain channels, the regions that deal with addiction-associated memories undergo a rewiring that, apparently, leads to forgetting.

There have been a number of drugs that have claimed to help addicts get clean. Simply typing “pill to cure addiction” in Google brings up a range of results, some of which are more trustworthy than others. There’s naltrexone, which is used to wean addicts off of heroin and alcohol, and disulfiram, which causes extreme nausea if taken with alcohol; both are approved by the FDA to treat addiction. On the other end of the legitimacy spectrum, there was the Russian-made ass “torpedo”, which essentially terrified users out of addiction: the pill, inserted in addict’s butts, was apparently fatal when combined with alcohol.

Morikawa’s proposed treatment, however, would be the first to deal with the environmental cues leading to relapses rather than with the physical aspects of addiction. “Addicts show up to the rehab center already addicted,” he said. “Many addicts want to quit, but their brains are already conditioned. This drug might help the addicted brain become de-addicted.”