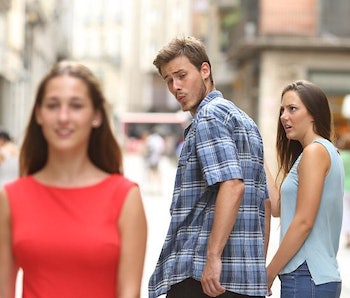 Humans love sports because winning feels awesome. After a big victory, we feel compelled to indulge in all sorts of prideful rituals: dabbing, showering in Gatorade, and, for some, trying to get laid. The results of a new study in Human Nature show that males, at least, tend to act more promiscuously after an athletic victory, regardless of whether it was rightfully earned or not. As the study’s lead author explains to Inverse, these results might illustrate the same behavior that led Homo sapiens to thrive over evolutionary time.

In the new study, the team led by Danny Longman, Ph.D., a postdoctoral research fellow at the University of Cambridge’s Department of Archaeology and Anthropology, surveyed 38 male Cambridge rowers in their early 20s about their “self-perceived mate value” and willingness to engage in casual sex both before and after they competed in races. They also measured the rowers’ testosterone levels, which were key to understanding the results of the experiment. the rowers didn’t know the races were rigged so that no matter the actual outcome, the winner the race was randomly declared. As the experiment revealed, believing you’ve won can have as much of an effect as actually winning.

The “winners,” Longman tells Inverse, “experienced a surge in testosterone, as well as an increased view of their own value as a sexual partner. They were more likely to approach attractive women with a view to initiate a relationship, and an increased willingness to engage in short-term, casual relationships.”

Scientists had previously established that spikes in male testosterone are linked to having more sexual partners and switching from a long-term to a short-term “reproductive strategy” — that is, trying to hook up with lots of random people rather than stick it out with a single person. What Longman’s study shows is that those spikes in testosterone can be manipulated by something as simple as a lie about winning.

The study showed that men who believed they won the race were 11.29 percent more likely to try to have sex with attractive women than the “losers” and had a 6.53 percent higher self-perceived mate value. Those who thought they lost, meanwhile, didn’t behave any differently. A look at the testosterone levels of the men showed a correlation: the “winners” had testosterone levels 14.46 percent higher than those who lost.

This study is part of Longman’s larger body of work investigating how sports can test evolutionary theory. The basic idea is that the conflict inherent in competitive sports mimics, to some degree, the conflicts experienced by early humans as they fought over resources and mates. By showing that the male body spurts out testosterone after defeating a rival team and that behavior shifts accordingly, Longman has gathered evidence showing that humans are really good at adapting quickly. And that, he says, slots in quite nicely with an emerging theory explaining how Homo sapiens was able to conquer the earth.

“A remarkable trait of humans, and perhaps the reason we have been able to spread from Africa and colonize so much of the world, is that our physiology is able to quickly adapt to changing environmental conditions,” says Longman. “We do not have to rely on genetic changes, which can take many generations to occur through natural selection. Instead, we can change our physiology quickly, without the need to wait for slow genetic change.” Perhaps nothing better illustrates our physiological agility better than a man, feeling great about his physical prowess and status in a group, seizing his chance to have sex with as many people as he can.

“That’s precisely what happened here – belief that an athlete won a contest led to a belief that their status had increased, and their physiology and psychology quickly adapted to take advantage of potential increases in sexual opportunities,” says Longman.

While the study may suggest an easy way to give shy guys a sexual confidence boost, there’s plenty of room for it to backfire. Our male ancestors might have benefited from having as many kids with as many females as possible in order to pass down his genes, but the evolution of human culture has transformed promiscuity into an unwise reproductive choice. “Pursuing a strategy aimed solely at maximizing genetic contribution to the next generation by having more children, which evolutionary theory would argue should be the aim, is to neglect wider cultural norms and emotional needs,” explains Longman. In modern society, we value long-term, committed relationships, which are, in turn, important for the well-being of the kids. It’s unclear whether the same shifts in mating patterns occur in victorious women — Longman hopes to pursue that line of research in the future — but all sexes stand to suffer from the cultural consequences of our opportunistic biology.

“Having a series of short-term, uncommitted relationships has the potential to end in loneliness — what happens when status falls, opportunities to find new partners die away?” Longman adds.

He acknowledges that his findings might suggest that high-status, “winning” men may have a “slight physiological propensity towards engaging in casual relationships” but underscores the importance of free will. Victorious males — or at least those convinced they have won — may feel emboldened by their physiology, but those in long-term relationships are proof that modern humans aren’t slaves to their hormones. “Our data does not suggest that such men are more likely to be unfaithful, or unreliable as a partner, so I wouldn’t be advising women to avoid men on this basis,” says Longman.

More like this
Culture
7.1.2022 9:00 PM
Male celibacy has evolutionary benefits — but not for the reasons you think
By Ruth Mace, Alberto Micheletti and The Conversation
Mind and Body
6.30.2022 11:00 AM
Male birth control is at our fingertips. Will we ever grasp it?
By Elana Spivack
Mind and Body
6.29.2022 6:30 PM
How music makes you feel may depend less on your brain than scientists once thought — study
By Allison Parshall
Related Tags
Share: