"This ideology makes achievement the measure of worth." 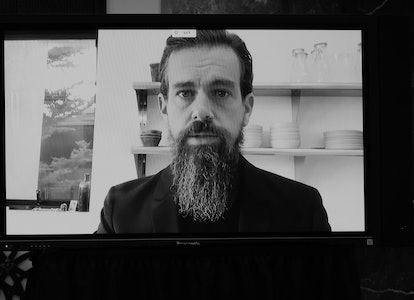 Both critics and supporters of Twitter’s recent ban of former President Trump can agree on one thing: the power of the tech elite has risen considerably in recent years. No one elected Jack Dorsey, Mark Zuckerberg, Jeff Bezos, or Elon Musk, but their decisions have outsized effects on society.

It is perhaps ironic, then, that while their actions can influence the course of our democracy, tech elites appear to have an "ambiguous relationship" with the very philosophy underpinning this system of governance.

In a new study, researchers combed through 49,790 tweets and several public proclamations from members of this new elite to glean insights into their world views.

Why it matters — Co-author and professor of Sociology Hilke Brockmann of Jacobs University in Germany tells Inverse the study tests, for the first time, whether the captains of technology share a world view fundamentally different to that of the general population. In contrast to the rest of us, this study confirms the tech elite's stress on “the importance of meritocratic values, and disruption.”

“This ideology makes achievement the measure of worth, and denigrates those who are perceived as ‘low-achieving.’”

How they did it — Brockmann and co-author John Torpey of the City University of New York scraped 49,790 tweets from 30 English-language Twitter accounts of members of the Forbes list of 100 richest people in tech. To compare how the tech elite might differ from the non-tech elite, the two also looked at the language 17 tech billionaires use in their public commitments to the Giving Pledge, a philanthropic endeavor to give away wealth created by billionaires Bill and Melinda Gates and Warren Buffett.

The language analysis is an imperfect measure of the innermost thoughts of the tech elite. For one thing, the two note in their study, those tweets and Giving Pledge letters could very well be “managed by professional PR experts,” who excel in masking true opinions. But even with these limitations, the distinctive perspectives of this “overwhelmingly male” group, to quote Torpey, educated in elite institutions, stood apart.

The results were published on January 20 in the journal PLOS ONE.

What they found — The tech elite, according to Brockmann and Torpey, have a unique belief in the concept of meritocracy.

Coined by British sociologist Michael Young in his book The Rise of the Meritocracy in 1958, Young imagined a dystopian society in which merit formed a new form of social class.

“Belief in meritocracy is one of the strongest features of the tech elite’s worldview, and this is part of what has made meritocracy so politically contentious now,” Torpey tells Inverse.

“As Michael Young wrote in the first major book about meritocracy, this ideology makes achievement the measure of worth, and denigrates those who are perceived as ‘low-achieving.’”

At the core of this meritocratic worldview, Brockmann says, the tech elite share the “belief that through hard work and IQ, they have legitimately earned their position and their wealth.”

This belief system, she tells Inverse, obscures "the truth." For Brockmann, the reality is that “many conditions were necessary in order to earn such a prominent position and to accumulate such a fortune,” ranging from individuals being born at the right place and right time, to supportive families, favorable tax policies, and sympathetic intellectual property laws.

“Meritocratic beliefs usually overlook these structural preconditions, and instead attribute all success to the individual genius and personal work ethic,” Brockmann says.

Looking at the public statements of the tech elite, Brockmann says that on the whole, these elites “are very positive and mainly communicate about themselves. And they have an ambitious mission and want to make the world a better place.”

And yet, Torpey cautions, “they have an ambiguous relationship to democracy, not appreciating the role of money in politics despite the fact that they provide major sources of cash in American electoral politics.”

From creating new means of surveillance to busing, the tech elite have increasingly attempted to fund efforts to replicate or replace services generally considered the responsibility of the state. Other plans, like Elon Musk's dream for a city on Mars, could take even greater leaps if realized.

With the Biden Administration’s efforts to rein in Big Tech already being treated with caution, the ambiguous relationship tech elites have with democracy could deepen in the coming years.

Ultimately, these trends are not new — they reflect a tension between industry and innovation and society which has held since the start of the Industrial Revolution, when the then captains of industry built entire towns around their enterprises, like the mining towns of Yorkshire, in England, or California's Gold Rush cities. These social experiments, touted as potential utopias where productivity and morality went hand-in-hand, may now be seen playing out on new frontiers, like space and the internet.

Abstract: The emergence of a new tech elite in Silicon Valley and beyond raises questions about the economic reach, political influence, and social importance of this group. How do these inor- dinately influential people think about the world and about our common future? In this paper, we test a) whether members of the tech elite share a common, meritocratic view of the world, b) whether they have a “mission” for the future, and c) how they view democracy as a political system. Our data set consists of information about the 100 richest people in the tech world, according to Forbes, and rests on their published pronouncements on Twitter, as well as on their statements on the websites of their philanthropic endeavors. Automated “bag-of- words” text and sentiment analyses reveal that the tech elite has a more meritocratic view of the world than the general US Twitter-using population. The tech elite also frequently prom- ise to “make the world a better place,” but they do not differ from other extremely wealthy people in this respect. However, their relationship to democracy is contradictory. Based on these results, we conclude that the tech elite may be thought of as a “class for itself” in Marx’s sense—a social group that shares particular views of the world, which in this case means meritocratic, missionary, and inconsistent democratic ideology.