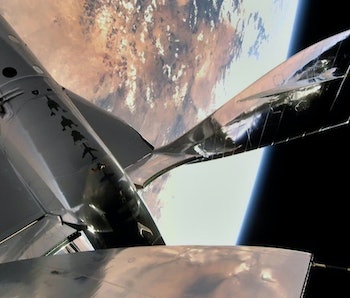 Liftoff! Virgin Galactic has taken perhaps its most important step yet toward making the dream of selling suborbital flights to space tourists a reality.

On May 22 at 10:34 a.m. Eastern, the firm’s VMS Eve aircraft took off from Spaceport America in New Mexico carrying the VSS Unity spaceship. Then at 11:26 a.m. Eastern time, the aircraft released the spaceship, which fired its engines for around 60 seconds.

The ship reached a speed of Mach 3 after its release. It ultimately reached an altitude of 55.45 miles above ground level before coming back to Earth. It then landed at the same spaceport —  the first-ever human spaceflight to take off from New Mexico.

Want to find out more about the private firms emerging in the new space race? Subscribe to MUSK READS+ for exclusive interviews and analysis about spaceflight, electric cars, and more.

Michael Colglazier, CEO of Virgin Galactic, said in a statement that the fight “showcased the inherent elegance and safety of our spaceflight system, while marking a major step forward for both Virgin Galactic and human spaceflight in New Mexico.”

The flight was a critical step toward meeting Virgin Galactic’s goal of blasting paying customers to space on suborbital trips around Earth. The VSS Unity ship is designed to carry six passengers at a time in a cabin measuring 7.5 feet in diameter and 12 feet in length — about the size of a small apartment’s bedroom. Over the course of a two-hour flight, passengers will be able to get out of their seats to experience several minutes of weightlessness before buckling back up ahead of the landing.

Unlike other private space companies like SpaceX, Virgin Galactic did not provide a live feed of the launch. NASASpaceflight hosted what it described as an “experimental better-than-nothing livestream,” which showed the flight timings and covered other key moments from the launch.

But Virgin Galactic did release an impressive two-minutes-37-seconds video of the ship’s groundbreaking spaceflight:

The VSS Unity, the name given to this specific SpaceShipTwo vehicle, was piloted by CJ Sturckow and Dave Mackay. Sturckow, who also flew on four NASA space shuttle flights during an 18 years tenure at the agency, is now the first person to fly to space from three different American states.

The VMS Eve, the name given to the WhiteKnightTwo carrier aircraft, was piloted by Kelly Latimer and Michael Masucci.

Virgin Galactic previously released a concept video showcasing the interior of the planned ship. The July 2020 video shows how passengers can peer out and witness the curvature of the Earth through 17 windows placed around the cabin — now, we have a little more visual information to go on as to what a space tourism flight might look and feel like.

It’s not the first time Musk has praised Virgin Galactic’s efforts to get to space. When sister company Virgin Orbit failed to send a rocket to orbit in May 2020, Musk commiserated by saying that “orbit is hard...took us four attempts with Falcon 1.”

The Inverse analysis — The launch marks a milestone in a long and difficult journey. Construction first started on Spaceport America in 2006, the same year SpaceX and Blue Origin tested early versions of their vehicles.

Since then, Virgin Galactic has suffered multiple setbacks. In 2009, Richard Branson claimed the firm could start suborbital flights by 2011. But in 2014, a SpaceShipTwo vehicle crashed into the California desert, killing one pilot and injuring another. A National Geographic article at the time wondered whether the incident could “end space tourism.”

Fast forward to today, and SpaceX is actively flying astronauts to the International Space Station and will soon be taking paying customers to space, too. Blue Origin targets a July crewed launch, and newcomer Rocket Lab is building a rocket designed for human crews, too.

Virgin Galactic is expected to review the data from this flight before it moves on to the next test in its long effort to take tourists to space. Other firms like SpaceX may seem to be speeding ahead in this space race, but the latest flight demonstrates that Virgin Galactic will not give up on its ambitions any time soon.