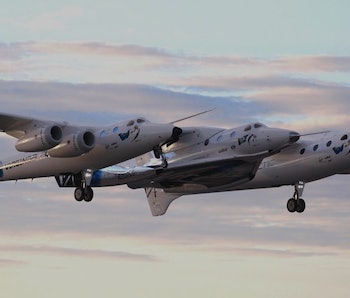 After Virgin Galactic’s SpaceShipTwo, dubbed VSS Unity, took to the skies for its third-ever test flight on Thursday — and again had to scrub a “glide test” at the last minute — the aerospace company is now looking ahead to its next test run.

The glider remained attached to its WhiteKnightTwo mothership, and the highly anticipated glide test was delayed yet again. Another test flight has not been announced.

On Tuesday, heavy crosswinds forced Virgin Galactic to call a scrub for the gliding test, with the pair of planes landing safely in the Mojave desert about an hour and a half after takeoff.

During the glide test, the two vehicles take off as a mated pair, with the SpaceShipTwo detaching from its mothership during flight and gently gliding back to the runway. Following a successful capture carry test, this is the next step before resuming rocket-powered flights.

Even though the glide tests are not designed to go into space, they are a major step towards Virgin Galactic’s ultimate goal of launching people into space. However, the aerospace company must first prove its vehicles are safe to carry human passengers. In order to do so, the company has to complete a lengthy testing process that includes glide tests and free-flight tests.

The last time Virgin Galactic performed a free-flight of its SpaceShipTwo vehicle was two years ago, when the vehicle — dubbed the VSS Enterprise — broke apart in-flight, injuring the pilot and killing the co-pilot.

The company is taking a cautious approach to testing and decided to pull the plug on today’s test after seeing something in the data they didn’t like.

Virgin Galactic controllers are combing over the data collected and will be ready to try again in the near future.

More like this
Science
Oct. 1, 2022
Elon Musk hints at a first Starship orbital flight date — and its quite soon
By LAURENCE TOGNETTI and Universe Today
Science
Sep. 30, 2022
SpaceX and NASA just unveiled an ambitious plan to save the Hubble
By Doris Elín Urrutia
Science
Oct. 1, 2022
NASA Crew-5 launch: Timeline, how to watch this historic ISS mission
By Harry Stoltz
Share: