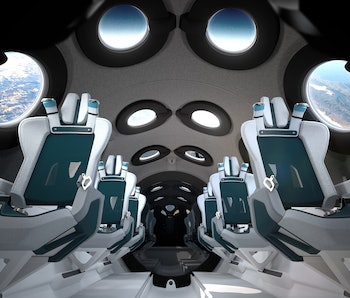 Virgin Galactic, Richard Branson's space-faring firm, on Tuesday took the wraps off the cabin interior that will ferry tourists into space and offer dazzling views of the Earth.

In a YouTube livestream, the company unveiled the interior for the SpaceshipTwo ship named VSS Unity. The ship has flown 76 times so far, including nine supersonic flights, and has created five new FAA-recognized astronauts. Once the company starts services, the ship will be used to host flights taking off from Spaceport America in New Mexico, which Virgin Galactic claims is the first purpose-built commercial spaceport.

The ship will be lifted by the WhiteKnightTwo carrier aircraft, releasing the ship at around 50,000 feet high after around 60 minutes. Passengers will experience several minutes of zero-gravity flight out of their seats before returning. The entire flight is expected to last around two hours.

"In many ways, the cabin is the design centerpiece of this transformational journey," Michael Colglazier, CEO of Virgin Galactic who has been in the position for less than two weeks, said during the Livestream. "It is this cabin which will enable hundreds and then thousands of people to embark on one of the most unforgettable journeys of their lives, that of spaceflight."

The cabin measures 90 inches in diameter and 12 feet long. It features six passenger seats, which the firm claims is tailored for each individual astronaut. It uses high-grade aluminum and carbon fiber. The structure has been cantilevered from the cabin sidewalls. When you leave the seat, it reclines to increase the amount of usable space. It stays reclined during re-entry to optimize the forces on the passenger, a system that's controlled by the pilot to maintain comfort.

Each seat has a digital display in the rear, sharing live data like speed, g-forces, and remaining flight time. A communications system also keeps the passengers connected to the two space pilots.

Chris Bergin, managing editor of NASASpaceflight, noted on Twitter the "wacky" evolution of flight graphic in the supplied renderings. The graphics chart the evolution of flight from early days to SpaceshipTwo, but seems to miss out the NASA Space Shuttle era.

The ship features 17 windows that passengers can use to look out and observe their surroundings. Mood lighting around the windows is used to match with each flight phase, a cue the company claims comes from its commercial aircraft.

Onboard, 16 cabin cameras will complement cameras in the cockpit and exterior to produce high definition movies of the flight. A giant circular mirror at the rear will enable passengers to see themselves during the flight.

The company tells Inverse that the cameras are housed around the windows, in the same "halo" as the mood lighting:

"We’ve built in 16 cameras on board to record every move you make on your trip. These cameras will provide you with your own personal record of becoming an Astronaut. The output from 16 cabin cameras, plus those in the cockpit and mounted externally, will generate high definition output to provide everything from the first Instagram posts, to a beautifully edited and historically significant personal movie. Each Halo (the surround of the windows) houses the cabin lighting and a camera for that essential “selfie” with Planet Earth."

Virgin Galactic states that it has 600 people in its Future Astronauts group lined up and set to fly. The company's "One Small Step" page is set to expand this out further, and enables fans to place a refundable $1,000 deposit. This will place them in a line to receive new tickets as they become available.

Those fans will have to pay a large sum to go on the trip of a lifetime – the firm's frequently asked questions page explained that fans should expect to initially pay more than the $250,000 price offered to early buyers.

The first day is focused on the suit and communications gear, the second day is on the seats and the cabin, the third day focuses on a dress rehearsal ahead of the big day. The flight will be scheduled for the fourth day.

"This cabin has been designed specifically to allow thousands of people like you and me to achieve the dream of spaceflight safely – and that is incredibly exciting," Virgin Group founder Richard Branson said in a statement.

Branson is currently preparing to take part in the first commercial flight, which the company claimed in February could take place as early as this year. The firm's next step will be getting its license from the Federal Aviation Authority, which in the press conference the firm claimed could come after one or two more test flights.