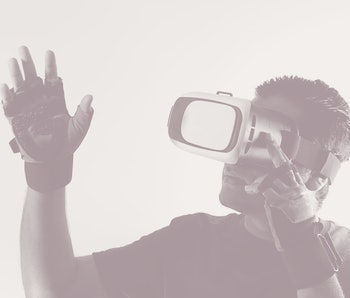 A new breakthrough in haptic feedback could make virtual and remote objects feel more present than ever.

A team of researchers at the University of Melbourne have developed a feedback system, announced Thursday, that reduces latency to lower levels than before. While current virtual reality gloves can make people feel like they're touching virtual objects, a delayed response can shatter the illusion.

Elaine Wong, one of the researchers, believes that their lower-latency approach can open up new internet applications. How about basketball across the world, where you feel the hoop as you go in for the slam dunk? Or even more serious applications, like remote medical surgeries that could benefit from greater feedback?

Although they all sound exciting, to feel realistic they require a response time of just one millisecond. That's no easy feat: at the time of writing, WonderNetwork shows a latency between New York and Washington of an immersion-breaking nine milliseconds.

"These response times impose a limit on how far apart humans and machines can be placed,” Wong said in a statement. “Hence, solutions to decouple this distance from the network response time is critical to realizing the Tactile Internet.”

The findings are set to be unveiled at the Optical Fiber Communication Conference and Exhibition, which is being held at California's San Diego Convention Center from March 8 to 12.

How did they do it? It's thanks to a module known as the Event-based HAptic SAmple Forecast, or EHASAF. This tries to predict ahead of time what might be the next feedback data, making it feel more responsive than the information traveling over the cables.

“To facilitate human-to-machine applications over long-distance networks, we rely on artificial intelligence to overcome the effects of long propagation latency,” said Sourav Mondal, an author on the paper.

The system uses machine learning to guess the next step. More specifically, it uses a reinforcement learning algorithm to guess based on prior experience. As the data is transmitted to the hand, the algorithm corrects and adjusts so it's always guessing based on the most up-to-date data.

The team gave the user a set of virtual reality gloves and showed them a monitor with a virtual ball. The current system supports four materials which vary the feel: a foam ball, for example, will offer less resistance than a metal ball.

Prediction at this early stage is rather high. Of the four materials tested, the model was accurate to a rate of 97 percent.

“We think it is possible to improve prediction accuracy with a greater number of materials,” said Mondal. “However, more sophisticated artificial intelligence-based models are needed to achieve that.”

It's not the first time researchers have tried to further augment virtual reality. A wearable skin, demonstrated in November 2019, used a thin, elastomeric layer to enable feelings like a hand touching an arm, or feeling strikes at pressure points during a video game.

Virtual reality could reach further into the mainstream as technology advances and prices drop. Renowned developer Valve announced Half-Life: Alyx in November 2019, the first game in the critically-acclaimed series built from the ground-up for virtual reality that requires players to solve puzzles using virtual hands. While it could provide a new use case for the nascent headsets, it could also demonstrate the value of predictive hand feedback.

These headsets could grow smaller and become as ubiquitous as the smartphone. Apple is rumored to be interested in a set of augmented reality glasses, which could leverage the iPhone's increasing power to provide on-the-go experiences.

Perhaps in the future, if you find yourself in the park with your friend but no ball to throw, it will be just as convenient to simulate a ball with your headsets.

More like this
Innovation
Jan. 21, 2023
45 genius solutions to your stupid problems around the house
By Christina X. Wood
Gear
Jan. 23, 2023
Why Microsoft thinks ChatGPT (and not the metaverse) is its future
By Ian Carlos Campbell
Gear
Jan. 18, 2023
Apple's postponed glasses prove our AR future is further off than we thought
By Ian Carlos Campbell
LEARN SOMETHING NEW EVERY DAY.
Related Tags
Share: