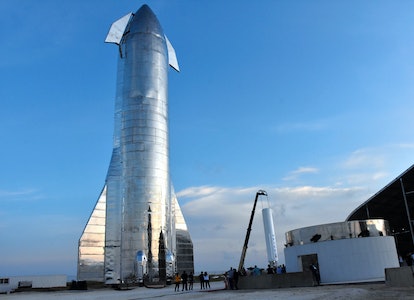 The Starship, SpaceX's in-development rocket designed to send the first humans to Mars, is getting bigger and bolder than ever before.

Elon Musk, the SpaceX CEO that wants to establish a city on Mars, told his 32 million Twitter followers Tuesday that the stainless steel rocket's design is "evolving rapidly." Musk explained that a third-party analysis, which suggested the rocket would use 17 steel rings and the nosecone to comprise the body, is "pretty close" to the final outcome.‌‌ Musk also confirmed that the total rocket has increased in size to 120 meters (393 feet).

It's a big change for the Starship, as SpaceX works at the Texas facility to complete the first orbital launch. The ship is designed to be fully reusable and can transport either 100 people or 100 tons into space. Musk plans to produce around 1,000 Starships as part of a plan to establish a human city on Mars by 2050. The ship uses liquid oxygen and methane as its fuel, meaning inhabitants will be able to refuel the Starship using Martian resources.

It's a grand plan, but one that's been tough to pull off. SpaceX completed a 150-meter flight with a miniaturized version of the ship dubbed "Starhopper" in August 2019, and now plans to complete an orbital test flight. Video footage shows test tanks buckling under pressure. Musk was reportedly left annoyed after a March test, and requested the engineers flag issues with him directly in future.

The comments follow assertions from Musk a few hours prior, where he explained the rocket was growing in size compared to previous iterations. The Super Heavy booster, designed to help the Starship escape the Earth, has increased in size to 70 meters (229 feet). Including the Starship at 50 meters (164 feet), the whole system now measures 120 meters (393 feet).

It's a notable jump in size from previous versions of the rocket. When Musk initially outlined what was then known as the "BFR" in September 2017, the ship itself measured 46 meters (150 feet) and the whole vehicle measured 106 meters (348 feet). When Musk unveiled the Starship Mk.1 prototype at the Boca Chica facility in Texas in September 2019, complete with its new stainless steel approach, the ship measured its current 50 meters (164 feet) and the full design measured 118 meters (387 feet).

That's not the only place where the Starship is changing. At the September 2017 event, the vehicle had a total liftoff mass of 4,400 metric tons. In September 2019, Musk revealed that the Starship Mk.1 weighs 200 tons without fuel, 1,400 tons with fuel, and stacked on top of the Super Heavy weighs around 5,000 tons. Musk revealed this week that, despite the larger ship, this last figure will remain around the same.

Musk has suggested that the rapidly-changing design will help fix some of the big issues emerging during tests. At the start of March, after the Starship "SN1" prototype exploded, Musk explained that SN2 would fix some of the issues around welding that plagued the earlier versions. In January 2020, Musk explained that "each SN will have at least minor improvements, at least through SN20 or so of Starship V1.0."

While the design may have taken inspiration from Tintin, SpaceX is crafting something much more unique with its new design.

More like this
Innovation
8.8.2022 10:00 AM
A wild new plane-train hybrid could whoosh you to your destination — if it can get off the ground
By Molly Glick
Innovation
8.16.2022 11:15 AM
After quitting the ISS, Russia reveals its next-gen space station
By Darren Orf
Science
8.16.2022 6:00 PM
A new plasma-based technology could be crucial for living on Mars
By Doris Elín Urrutia
Related Tags
Share: