SpaceX Starlink: how it could kickstart an 'uncontrolled experiment'

“Mega-constellations [like Starlink] will begin this process as an uncontrolled experiment.” 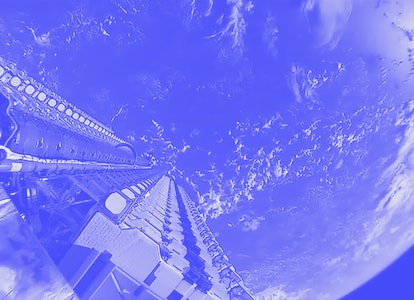 SpaceX has launched the latest batch of Starlink satellites — but researchers are warning about an all-new threat from these mega-constellations, potentially kickstarting an “uncontrolled” science experiment with the Earth’s atmosphere.

On Wednesday at 2:59 p.m. Eastern time, the firm launched 60 satellites for Space Launch Complex 40 at the Cape Canaveral Space Force Station in Florida. Ars Technica notes that it’s the 100th consecutive successful launch of a Falcon 9 booster after the CRS-7 mission failed to reach the International Space Station in 2015. It’s also the 16th launch of 2021, meaning SpaceX has launched a rocket every nine days so far.

But the feat may come at a cost. In a paper for Nature this month, researchers claim the development of mega-constellations like Starlink “risks multiple tragedies of the commons, including tragedies to ground-based astronomy, Earth orbit, and Earth’s upper atmosphere.”

Want to find out more about SpaceX’s plans for Starship? Subscribe to MUSK READS+ for exclusive interviews and analysis about spaceflight, electric cars, and more.

MEMORIAL DAY FLASH SALE: This week only, unlock the full benefits of Musk Reads+ for one year at just $99. This offer expires at 5 p.m. Eastern time on Tuesday, June 1.

Aaron Boley, associate professor at the University of British Columbia’s physics and astronomy department and the lead author, tells Inverse that these emergent mega-constellations will need better governance — and fast.

“Regulations that consider the full environmental effects of systems of satellites, rather than single satellites, will be necessary for maintaining safe and sustainable practices with space use,” he says.

Perhaps the biggest effects could come as the satellites start to deorbit, sparking what could be a major experiment in geoengineering.

This week’s SpaceX launch is the 29th batch of Starlink satellites since the first in May 2019, building out the firm’s internet connectivity constellation. Starlink aims to offer high-speed and low latency internet access almost anywhere with a view of a ground terminal.

SpaceX has now launched 1,737 satellites for Starlink, with 951 operational. Starlink satellites typically take a few months to move into position and start operations. Starlink is already the biggest single constellation in space, but the firm has applied for permission to launch up to 42,000 satellites.

In response to the Falcon 9 feat, SpaceX CEO Elon Musk wrote on Twitter:

“Cumulative payload to orbit is the really crazy number. Falcon has delivered more than double rest of world combined over trailing 12 months.”

It’s not just SpaceX planning to launch larger-than-ever constellations. Other projects are planned from the likes of OneWeb, Amazon, and GW. The paper explains that these firms aim to mass-produce cheaper satellites on a faster upgrade cycle.

“There is not a simple solution to this, but treating space as a resource and avoiding, when possible, a consumer electronic model for satellites are important steps,” Boley says.

One issue, in particular, could have an inadvertent effect on the planet’s atmosphere. The paper notes a number of facts:

It’s not as much as the 54 tonnes (119,050 pounds) of meteoroid mass that falls to Earth every day. However, the researchers note that the satellites are mostly aluminum. Meteoroids, on the other hand, tend to be less than one percent aluminum based on mass. That means it’s possible these mega-constellations will greatly increase the amount of aluminum scattered into the Earth’s atmosphere on a given day.

The paper warns that this will effectively become a giant science experiment in climate change:

“Anthropogenic deposition of aluminum in the atmosphere has long been proposed in the context of geoengineering as a way to alter Earth’s albedo. These proposals have been scientifically controversial and controlled experiments encountered substantial opposition. Mega-constellations will begin this process as an uncontrolled experiment.”

Boley says that the full impact this will have is unclear, in part because it will depend on how companies approach maintenance.

“However, we do know that such material in sufficient quantities can change the albedo of Earth directly, as well as provide nuclei for high-altitude cloud formation,” Boley says.

Indeed, scientists have explored the idea of scattering material into the atmosphere to reduce the Sun’s energy. An October 2015 analysis from Harvard University, published in the journal Atmospheric Chemistry and Physics, claimed that pumping aluminum oxide (or alumina) into the atmosphere could have less of an environmental impact than pumping sulfates into the air to achieve the same effect — although the researchers warn that there are unknown risks with doing this.

In effect, pumping particles like these into the atmosphere is about mimicking the effects seen with volcanoes. NASA noted that when Mount Pinatubo erupted in the Philippines in 1991, the resultant sulfur dioxide cooled the planet by around half a degree Celsius (one degree Fahrenheit) for 15 months.

Alice Gorman, associate professor in space archaeology at Flinders University, tells Inverse that the space industry has assumed “for too long” that leaving satellites to burn up in the atmosphere is the most desirable endpoint.

Gorman explains that alumina, formed as aluminum spacecraft burn up, can cause the ozone layer to decay. That layer protects the Earth from the full force of the Sun’s ultraviolet rays.

Beyond backing up Boley and his team’s calls for greater oversight, Gorman also argues that the industry needs to start “thinking more creatively” about which materials to use for spacecraft. In a CNN article this month, Gorman highlighted silica-based ceramics used on the space shuttle and a Japanese firm developing satellites encased in wood.

“Deliberately putting huge quantities of alumina dust into the atmosphere seems like a dangerous experiment, like introducing cane toads to Australia — a reasonable idea at the time which has terrible unforeseen consequences,” Gorman says.

SpaceX’s behavior did receive some praise in the paper. The firm was singled out as driving adherence to end-of-life guidelines, as outlined by the Inter-Agency Space Debris Coordination Committee. The paper notes, however, that regulations and international co-operations need to catch up with the new reality.

But similar to how SpaceX didn’t realize its shiny satellites could disrupt astronomers’ work, it may not be until masses of Starlink satellites actually start deorbiting that the true nature of the issue emerges.

Abstract: The rapid development of mega-constellations risks multiple tragedies of the commons, including tragedies to ground-based astronomy, Earth orbit, and Earth’s upper atmosphere. Moreover, the connections between the Earth and space environments are inadequately taken into account by the adoption of a consumer electronic model applied to space assets. For example, we point out that satellite re-entries from the Starlink mega-constellation alone could deposit more aluminum into Earth’s upper atmosphere than what is done through meteoroids; they could thus become the dominant source of high-altitude alumina. Using simple models, we also show that untracked debris will lead to potentially dangerous on-orbit collisions on a regular basis due to the large number of satellites within mega-constellation orbital shells. The total cross-section of satellites in these constellations also greatly increases the risk of impacts due to meteoroids. De facto orbit occupation by single actors, inadequate regulatory frameworks, and the possibility of free-riding exacerbate these risks. International cooperation is urgently needed, along with a regulatory system that takes into account the effects of tens of thousands of satellites.