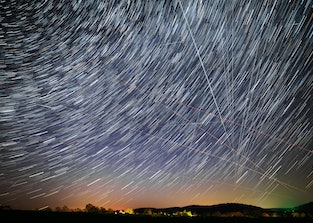 That's a lot of satellites

Move over, SpaceX Starlink: OneWeb to fill skies with even more craft

OneWeb may be about to join SpaceX in filling the sky with satellites.

The internet access firm announced Wednesday that it had applied to the United States' Federal Communications Commission to place up to 48,000 satellites in the sky. It's a marked increase in size from its current setup, as it's only launched 74 satellites to date and has permission to launch 720. Adrian Steckel, CEO of OneWeb, explained in a statement that the over-500-fold increase in size will help for the future:

"This significant increase in the size of the OneWeb constellation enables long-term flexibility and ensures we will be ready for the demand, future growth, and technology changes to come."

The firm is joining an emerging race to fill Earth's orbit with satellites, in a bid to offer better internet service than ever before. Satellite internet promises consumers that it can point a receiver to the sky and receive service practically anywhere, an attractive prospect for rural and underserved communities. But these services typically offer high prices, low speeds, and high latencies as signals are beamed back and forth from space.

OneWeb is aiming to offer something better. The company has demonstrated speeds of up to 400 megabits per second, with a latency of just 32 milliseconds. This would not only rival existing satellite operators but in many areas would give ground-based firms a run for their money.

The company's plan bears similarities to SpaceX's. The firm has launched seven batches of 60 satellites each for its Starlink constellation, designed to remedy some of the biggest flaws around satellite internet. The craft are designed to orbit at a much lower 550 kilometers above sea level. This is intended to provide gigabit internet speeds, with latency measured in just tens of milliseconds. In October 2019, SpaceX asked the United Nations' International Telecommunications Union for permission to operate a staggering 42,000 craft in space.

Both constellations suggest the sky is about to get rather crowded. A January 2019 analysis found that there were 4,987 satellites orbiting the Earth at the start of that year, up 2.68 percent from April 2018. In total, 8378 objects have been launched into space. That means SpaceX and OneWeb's constellations would not only eclipse the total number of satellites in space, but the total number ever launched into space.

It seems like a lot, and early Starlink launches have caused concerns for astronomers. SpaceX president Gwynne Shotwell noted in October 2019 that an Earth populated by 30,000 people would be incredibly sparse, meaning the figures may not be as big as they seem.

These two are not the only ones planning to launch mega-constellations. Others include Amazon's Project Kuiper, which could cover over 3,000 craft, and TeleSat, which has applied for permission to launch over 1,000.

The sky could look a whole lot more crowded soon.

The Inverse analysis – OneWeb's announcement suggests the sky is about to get pretty crowded, but it comes at a rather odd time for the firm. In March 2020, the company filed for Chapter 11 bankruptcy, explaining that its goal is "to use these proceedings to pursue a sale of its business in order to maximize the value of the company."

In its announcement this week, the firm wrote that it "continues the restructuring and sale process and has received considerable interest from parties worldwide." In its FCC filing, the firm claimed it had "already secured debtor-in-possession financing and expects to soon exit the Chapter 11 process." Ars Technica noted that the agency's deadline for applications was fast approaching, which may suggest why OneWeb filed the application at an otherwise-odd time.

It's hard to predict for sure who would win in the race to create a mega-constellation, but a firm that has managed to launch over 400 satellites in the space of 12 months (SpaceX) seems like one that is well on the path to getting there first.