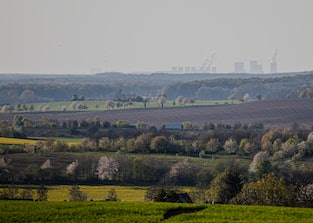 million tons of CO2 that could be saved

These superpowerful crystals could change everything from Teslas to AC units

Electric cars are a crucial part of the mix needed to fight global warming. While the technology is imperfect, a recent study showed that for 95% of the world, driving an electric car would be better for than the environment than a traditional combustible engine. But a number of challenges stand in the way, including microscopic objects called wide bandgap semiconductors (WBGs), that are crucial to electric cars and any other electronics. An international team of researchers has just revolutionized how they're built.

Quickly: a semiconductor conducts, or carries, electrical currents. They're not as conductive as some materials, but their resistance to conductivity falls as temperature rises. WBG semiconductors are especially valuable in cars because they can operate at very high temperatures like 300 °C (572 F). They're smaller, faster, and more reliable than traditional semiconductors, which use silicon.

So silicon has its problems, and WBG semiconductors do too: namely, they're too expensive. The answer, the team believes, lies in what's known as silicon carbide, or SiC: it can withstand higher voltages, and are already used by the military. By turning SiC into WBG semiconductors, scientists believe they could revolutionize electronics around the globe—including cars.

Using theoretical and experimental tests, an team of material scientists from Italy and France has identified two key sources of defects in these superpowerful crystals that can be targeted during their formation to ensure these materials achieve their full potential.

Free from defects or impurities, the researchers say that these crystals could revolutionize the electronics industry by far outperforming traditional silicon technology in switching speed (how quickly it changes between logic tasks) and lower energy losses. Simply replacing silicon technology with this silicon-carbide would reduce CO2 emissions by over 6 million tons, the research finds.

"Development of a technological framework...can be a game-changing strategy."

According to the EPA, that's equivalent to the emissions created by over a billion cars in a year.

In their study, published Tuesday in the journal Applied Physics Reviews, the authors write that while much research has been done on how to develop and use silicon-carbide materials, little has actually been done to understand how to optimize this material. Developing a clear analysis and framework for building these pristine crystals could completely change the logistics of bringing these materials to market, says the study's first author and microelectronics researcher at the National Research Council of Italy, Giuseppe Fisicaro.

"Development of a technological framework for the control of crystalline imperfections within SiC for wide bandgap applications can be a game-changing strategy," said Fisicaro.

The researchers highlight two important, internal defects in these diamond-like crystals that a framework could help control: the creation of anti-phase boundaries and stacking faults in the crystal. These impurities affect the crystalline alignment of the silicon-carbide and can negatively affect the quality of the material -- and thus its effectiveness -- if left untreated in the crystal.

The authors write that learning to mitigate these imperfections when growing the crystals themselves (instead of attempting to correct it afterwards) will be essential for ensuring they can be used to advance technologies like electric and hybrid vehicles in years to come.

These changes are complex, but having WBG semiconductors available for a wide variety of everyday products could have a huge environmental impact. "This work has been motivated by the quest for a deeper control of material quality in one of the most promising semi- conductors for future power electronic devices," the authors write in their conclusion, and it's not just cars—power draining devices like air conditioning systems and refrigerators could see their efficiency grow by leaps and bounds. It's no magic bullet for global warming, but their future development could certainly be a shot in the arm.

Abstract: Emerging wide bandgap semiconductor devices such as the ones built with SiC have the potential to revolutionize the power electronics industry, through faster switching speeds, lower losses and higher blocking voltages which are superior to standard silicon-based devices. The current epitaxial technology enables more controllable and less defective large area substrate growth for the hexagonal polymorph of SiC (4H-SiC) with respect to the cubic counterpart (3CSiC). However, the cubic polymorph exhibits superior physical properties in comparison to its hexagonal counterpart, such as a narrower bandgap (2.3 eV), possibility to be grown on a silicon substrate, a reduced density of states at the SiC/SiO2 interface and a higher channel mobility, characteristics which are ideal for their incorporation in metal oxide semiconductor field effect transistors. The most critical issue that hinders the use of 3C-SiC for electronic devices is the high number of defects in bulk and epilayers respectively. Their origin and evolution are not understood in literature up to date. In this manuscript we combine ab initio calibrated Kinetic Monte Carlo calculations with transmission electron microscopy characterization to evaluate the evolution of extended defects in 3C-SiC. Our study pinpoints the atomistic mechanisms responsible for extended defect generation and evolution and establishes that the antiphase boundary is the critical source of other extended defects such as single stacking faults with different symmetries and sequences. The paper showcases that the eventual reduction of these antiphase boundaries is particularly important to achieve good quality crystals which can then be incorporated in electronic devices.