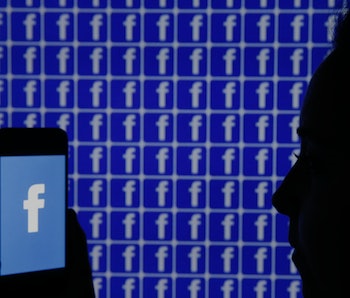 Reuters just announced its partnering with Facebook to help fight misinformation on the social media platform during the 2020 election and beyond. A team of Reuters fact-checkers will be monitoring content on Facebook and Instagram to "identify where media is false or misleading."

"Reuters will now assess the authenticity of user-generated photos, videos, headlines and other content on social media—in the run-up to the U.S. election and beyond—verifying for Facebook’s U.S. audience in both English and Spanish and publishing findings on a specially created blog," Reuters reports.

Stories that have been labeled as misinformation will be distributed less on the platform, and pages that spread too much misinformation may have their distribution reduced generally and possibly even lose the right to advertise. Based on Facebook's existing policies, it seems unlikely these rules will apply to politicians.

Reuters explains that it has been working on educating people around the world on how to spot fraudulent videos and images since 2018, and it partnered with Facebook in December to develop an online tool that helps journalists learn how to identify this kind of fraudulent content.

Jess April, director of global partnerships at Reuters, said in a statement that they've watched the spread of misinformation on a massive scale and are working to fight it.

"We are steadfastly recognizing the magnitude of misinformation taking place around the world. It’s a growing issue that impacts society daily and it’s a responsibility for news organizations and platforms to halt the spread of false news," April said. "Reuters has a superior track record in sourcing, verifying and clearing user-generated content for distribution to thousands of clients globally and we are best placed in using our in-house expertise to fact check social media content."

After the spread of misinformation on Facebook and other social media platforms had such a large impact on the 2016 election, these companies have been working on developing strategies to fight fake news, deepfakes and more. As we've previously reported, Facebook's plan to fight deepfakes that was announced last month has been criticized heavily as not going far enough. The question now is where this partnership with Reuters will be more effective.

See also: Is social media stressing you out? Why you keep coming back for more

"You're basically negotiating with the foxes to keep the hens safe," Binkowski says. "What happens is Facebook gets to control whatever output it wants and still with no transparency at all, so we fact-checkers can break our backs for the truth and their algorithms will still merrily spread disinformation all over the world and corrode every democracy it touches."

Binkowski says she believes working with Facebook just offers the company "good optics" while it perpetuates the spread of misinformation. After Snopes and Facebook went their separate ways, the social media giant partnered with the fact-checking platform Lead Stories, and she says their people seem to be doing good work, but she says Facebook should not be trusted to truly fight misinformation.

More like this
Innovation
5.2.2022 8:00 PM
Is Russia's withdrawal from the ISS a bluff? Why it’s too soon to say if it’s leaving
By Nathaniel Scharping
Innovation
5.16.2022 9:00 PM
Boeing’s Starliner spacecraft takes another shot at the International Space Station
By Claire Cameron
Innovation
5.13.2022 11:00 AM
These robots have one special skill that could make human chefs obsolete
By Sascha Brodsky
Related Tags
Share: