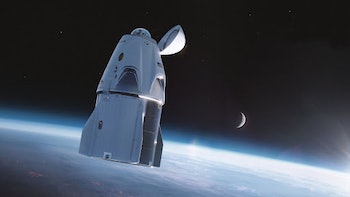 For as long as the world can remember, Elon Musk has wanted to bring humans to space. But none of that astronaut stuff — Musk wanted to float real, everyday humans into orbit so that, one day, we could all live beyond Earth if we’d like. This September, a SpaceX ship will bring humanity one flight closer to that possibility.

SpaceX’s Dragon gets stacked ahead of its cargo resupply mission on August 28.

A different kind of mission

When Inspiration4 launches on September 15, it will be the first all-civilian mission to orbit. Ever.

It will also be different from any other Crew Dragon mission since its capsule doesn’t need to reach the International Space Station. Instead, its four passengers will orbit the Earth for three days.

The ISS, the Crew Dragon’s normal target, orbits the Earth once every 90 minutes. There’s no space for weather delays: the rocket has to launch on time.

After the first Crew Dragon mission in May 2020, then-president Donald Trump recounted the moment when he discovered this:

“I was told that the rocket you just witnessed had to be launched within one second, or it would be impossible for it to hit its target. I said to Jim [Bridenstine]: ‘Jim, it’s okay. Why don’t you wait five or ten minutes?’ And he said, ‘Sir, we only have a window of one second.’ And I walked out of here shaking my head.”

The crew arrived at the ISS 19 hours after launch.

The capsule docks and undocks from the station autonomously. However, the crew is trained to take over in case issues arise. It’s not easy: SpaceX launched an online game of the docking process ahead of the first mission so fans could try it for themselves.

The game, SpaceX claims, uses the same on-screen controls as the actual capsule. The capsule offers three touchscreens with around 10 pages of controls per screen. Hurley and Behnken manually docked to the ISS during that May 2020 mission to demonstrate the controls worked.

Want to know the history of Crew Dragon, what makes Inspiration4 such a challenging flight, and how the mission echoes 1960? Read the full interview with astrophysicist Jonathan McDowell, only in MUSK READS+.

No ISS, no problem

Fortunately, the crew won’t have to worry about any of that. Jonathan McDowell, an astrophysicist at the Harvard and Smithsonian Center for Astrophysics, tells Inverse that Inspiration4 should be a lot more straightforward.

“It is simpler than an ISS mission — both in terms of scheduling (no need to target a particular orbital plane, so none of that one-second launch window stuff) and in terms of safety,” McDowell says. “Rendezvous and docking is a tricky thing, with, of course, the risk of collision if you do it wrong.”

But like the other missions, the crew will be trained on how to take over the controls if needed. Passenger Jared Isaacman told Time this month that the group covered over 60 procedures for capsule operation, packed into 60-hour weeks of training over several months.

He also noted that for a jet pilot used to physical controls, the touchscreens of the capsule take some adjustment time.