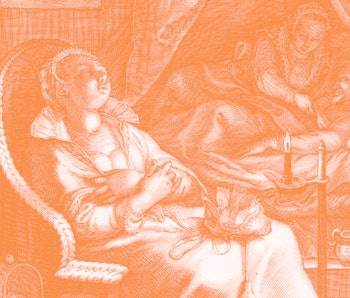 It's the night before your first day at your dream job and you're determined to get a good night's sleep. You crawl into bed at a respectable 10 p.m. and pull out the book you've been slowly making your way through. You're a few pages in, but then: your scrolling finger starts to itch. Checking Twitter one last time before getting some shut-eye can't hurt anything, right?

Suddenly you're in a deep Wikipedia hole reading about quick-drying cement with only four hours left until your alarm goes off.

While it's easy to blame our own lack of impulse control and short attention spans for our poor sleep (and that may be part of it) the modern world has been conspiring against a goodnight sleep for a long time. From our productivity culture to artificial lights in our home, we've become extremely disconnected from the actual sleep needs of our bodies. But what if we could find a way to relearn our bodies' sleep signals?

A counterinsurgency is emerging. Thanks to an influx of new sleep technology in recent years, from smart rings and watches to a Princess and the Pea-style sleep mat, data-driven technology is helping us take back control of our most precious hours.

The Origin — While sleep wisdom today tends to focus on how many REM and deep sleep cycles we can achieve in a 7-9 hour slumber, sleeping before the advent of modern electricity looked pretty different.

According to discoveries made in the 1990s by a Virginia Tech historian, Robert Ekirch, before the 20th century, our ancestors used to dabble in a kind of sleep called "biphasic sleep." This meant that instead of sleeping for one long, eight-hour period, they instead slept for two four-hour periods with a few hours of calm wakefulness in between. Charles Dickens, who had what academics now call a "quirky obsession with sleeping bodies," created a historic document of biphasic sleep when he described characters taking a "first" and "second" sleep in his 1840 novel, Barnaby Rudge.

People seemed to like biphasic sleep. Based on historical records, these hours of late-night wakefulness were used for leisure activities like reading, writing, sewing or having sex -- all conducted by candle or moonlight. A. Roger Ekirch a professor of history at Virginia Tech, once told the magazine Sleep Review that these interludes were all endorsed by medical science at the time.

"First of all, it was a good time to take certain types of medicine, thereby anticipating the science of chronopharmacology today, taking medicine for anything from sour stomachs to smallpox," he tells the magazine's podcast. "Secondly, it was thought an ideal time to turn from one side of your body to the other side, to aid your digestion given the inaccurate notions that people had three, four hundred years ago of how in fact, the food was digested in the stomach. Third and finally, more than a few physicians endorsed this interval of wakefulness as a prime time to conceive children. As a French physician in the 16th century, Laurent Joubert, put it and I quote virtually verbatim, they enjoy it more and do it better because they’re rested."

While medical thinking would change radically between the 16th and 21st century, Joubert might have been on to something. A 1992 sleep experiment on this topic suggested that biphasic sleeping cycles may actually be our natural default.

The Trouble — This blissful, middle-of-the-night productivity was not destined to last. It ended with a flick of many switches, thanks to the spreading adoption of household electricity. No longer restricted to socializing when the sun was out or by dim candlelight, people began staying up later and the biphasic sleep cycle was sacrificed in favor of nightlife.

Speaking to Sleep Review, Ekirch describes the change as drastic, especially considering that people had slept the same way for thousands of years, before electricity. "Artificial illumination that was much more powerful beginning in the early 19th century. A single gaslight, it’s been estimated, was 10 times as powerful as a candle. Light from an electric bulb, toward the end of the 19th century, about 100 times more powerful than a single candle...light is absolutely critical in resetting our circadian pacemaker."

We might be still trying to adjust: As many as one-third of Americans report that they don't get enough sleep, and the lack of sleep can affect not only our cognition and performance in the following days but can also negatively impact a person's physical health.

How Tech Saved Your Sleep — So, is the only solution to pack up and head to a cabin in the woods to rekindle the biphasic sleep cycles of our forefathers? Not quite. Instead, a fantastic growth of sleep technology in recent years now offers a data-driven solution to this problem.

These sleep trackers come in a variety of forms, from apps for your Apple and Android watches and built-in tracking in your Fitbit, to smart rings like the Oura and sleeping mats, and are designed to be worn or used during sleep.

According to Johns Hopkins Medicine, regardless of which tool you use to track your sleep, most of these devices track the same kind of sleep data: sleep duration, sleep quality, sleep phases, and environmental and lifestyle factors.

These devices rely on a variety of factors: detecting movement, heartbeat or respiration. If it's a full mattress, they can have access to in-device microphones. They all rely on manual user input to make sure your details are accurate. They're not perfect. Because these at-home devices aren't connected to your brain and can't see the chemical signals you emit during sleep (though you could shell out a couple hundred dollars for an at-home EEG to do it,) they rely on these types of information to develop the picture of your night's sleep.

Petteri Lahtela, CEO and co-founder of Oura, has said that reaching the accuracy of EEGs from the comfort of home was the company's goal.

The algorithms of an Oura Ring are based on "over three decades of science and pioneering research of human physiology and psychophysiology and developing high-end consumer products applying the results of top tier research," he told the website Sleep Junkies in 2015. "It is our target to get as close to sleep lab accuracy as possible," Lahtela said.

Alan Schwartz, director of the Sleep Disorders Center at Johns Hopkins Bayview Medical Center, says in a discussion on the subject that the data collected from these types of trackers can help users reconnect to their sleep habits.

“They don’t measure sleep directly,” says Schwartz. "[But] the tracker will give you something to reflect on."

These trackers can help users recognize detrimental patterns in their own sleep. For example, maybe every Tuesday night a car gets towed outside your window and it causes you to toss and turn without fully waking. After recognizing that pattern a user could choose to shut their windows on Tuesday nights instead.

The Future — While these devices may not be a miracle cure for the sleepiness that plagues our days, they are an accessible way to gain a little more insight into our non-waking hours. More than just gamifying sleep, this data can give people autonomy over their sleep again.

"How Tech Saved" is an occasional series from Inverse that explores how technology saved something that's great. Have a suggestion for a future How Tech Saved story? Let us know here using this form.

This article was originally published on April 20, 2020