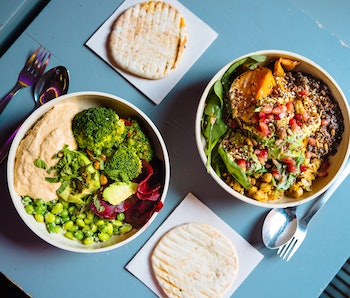 Google’s on-campus food is reportedly as innovative as the company. Employees in its headquarters have a choice of around 30 options that range from chef-led cafes, restaurants, and food trucks, all for free.

This focus on food doesn’t just start and stop around meal times. The search giant curates a selection of snacks and drinks and stations them around the company’s offices — apparently, New York City Googlers are never more than 150 feet from some kind of food. But this large selection had a heavy toll on employees in the form of the “Google 15.”

A little extra weight is fine, but unhealthy habits eventually stack up. According to the CDC, employees missing days of work due to high blood pressure, diabetes, smoking, physical inactivity, and obesity cost US employers $36.4 billion a year. In the shorter term, however, poor eating habits can hurt productivity, which is the number one priority for companies like Google.

So what’s a company that’s built on analytics and engineering to do? A scientific study, of course.

“Food has an impact on a person’s happiness and well-being, both short- and long-term,” Google Food Director Michiel Bakker told Food Management. “We have a responsibility to guide people to make great food choices.”

The company partnered with a team of researchers from Yale University and Saint Joseph's University to discreetly observe employee behavior at its New York City office over the course of a few months.

The researchers staked out a break room with a micro-kitchen that was stocked with free drinks and snacks, recording the number of people who took both a drink and snack. Distance became an important metric in the study. One beverage station, a fridge with cold drinks, and a brewing station for hot ones was 6.5 feet from the snack bar and another was 17.5 feet away. Snacks offered included nuts, crackers, candy, dried fruit, chips, and cookies. After observing more than 1,000 people, the researchers found that people who used the beverage station near the snacks were 50 percent more likely to grab something to eat with their drink. The amount of snacks added up to one pound of fat per year for each male employee’s daily cup of coffee.

The research team noted in Harvard Business Review that “people tend to eat food that is easy to see or easy to reach.” So they just moved the snacks further from the beverages. “A few additional feet between snacks and beverages caused a large enough decrease in snacking to potentially result in meaningful weight loss over time,” they wrote in their 2016 paper, “Proximity of snacks to beverages increases food consumption in the workplace: A field study,” published in the journal Appetite. “Although employers may be attempting to help employees by placing drinks and snacks conveniently in the same area … our research implies that sometimes less convenience might be more helpful.”

That’s not the only change that Google and the researchers made to reduce consumption of unhealthy snacks. In another micro-kitchen, M&Ms that had been available in bulk bins were replaced with individually wrapped packages. As a result, Googlers ate 58 percent less of the candy, a reduction of 308 calories to 130.

“Food has an impact on a person’s happiness and well-being, both short- and long-term.”

Another change promoted the eating of “unpopular vegetables” — beets, parsnips, squash, Brussels sprouts, and cauliflower. In a high-trafficked cafe, the team put up a colorful “Vegetable of the Day!” sign with photos and trivia facts next to a dish containing that vegetable as its main ingredient. This change led to a 74 percent increase of employees trying the featured dish and a 64 percent increase of the average amount each person served themselves.

Prior to these changes, Google had been optimizing its cafeterias to promote healthy options. The salad bar was moved by the front entrance so it’d be the first thing people saw, plates were reduced to smaller sizes to encourage better portions, and desserts were made into smaller portions and moved to a far corner of the cafeteria. Fruit is available on counters, while candy is in the drawers. Finally, water bottles were placed at eye level in fridges, while soda and other sugary drinks were placed lower, behind frosted glass. The company also offers cooking classes to employees so they make more informed choices.

Companies don’t need Google’s budget to promote better food choices. Healthy options can be made available to people by placing them front and center, increasing the likelihood that they’ll be eaten first. Desserts and other sweets don’t need to be taken away, but they can be available in smaller servings and out of view. Water and other healthy beverages can be given the most prominent spots.

“Everyone has work that they are trying to get done, and so you don't want to think a lot about what they are going to grab as a snack,” Jennifer Kurkoski of Google’s people analytics department told ABC News. “So let's make the thing that people default to the healthiest one possible.”