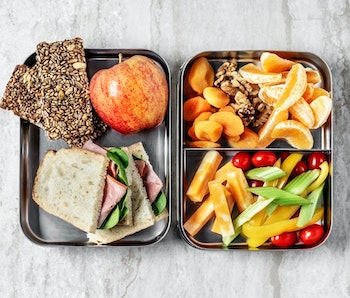 The idea of office snacks historically conjures an image of a bag of chips or a candy bar (hopefully) dropping from behind a spiral wire on a rack into a compartment behind a swinging metal door.

More than 2 million vending machines still exist across the US, with most inside manufacturing spaces or offices. But, according to Vending Market Watch, for many startups and larger tech companies, a diverse selection of free snacks made available in breakrooms has become an employee perk, bragging right, and a piece of company culture. There’s now an ecosystem around providing office workers across America with healthy, nutritious, and interesting snacks, from the small companies creating the products to services curating and serving them.

The first automatic vending machine first appeared in England in 1867 and sold stamps. Two decades later, the machines accepted coins. Vending machines crossed the Atlantic in 1888 and made their way to New York City, where they sold Tutti-Frutti gum. Over the next century, millions of vending machines would make their way across the country, offering up a selection of food and beverages. (Cold beverages are the best selling vending machine item.)

But these machines typically sold a limited selection of items from the largest food companies — Coca-Cola, Mars, PepsiCo, and its Frito-Lay subsidiary, Nabisco — which tend to be on the unhealthier side of the spectrum. And for companies looking for ways to attract new talent, offering free snacks turned out to be an interesting perk.

“One thing that’s interesting to look at is snacks taking the same progressive path as coffee,” said Sean Kelly, co-founder and CEO of SnackNation, a snack box provider. “Back in the ‘80s, only the best companies offered free coffee. Today, what companies don’t offer free coffee? About 10 to 15 percent don’t, and that’s the companies people don’t want to work for.”

Google, which helped kick off the open office trend, also played a big part in tech companies offering snacks as a perk. The search giants’ employees from the early days of the company have had access to free snacks, with a big focus on healthy offerings that won’t cause productivity dips.

Other companies and startups would follow, competing for millennial talent, who, according to Mintel, are significantly more likely to snack compared to older generations. Millennials are most likely to snack four or more times per day, and more likely to be “emotional or functional” snackers. Offering free snacks also means employees don’t need to venture out of the office for a snack break.

In a survey conducted by ZeroCater, 88 out of 100 surveyed employees and office managers said they consider snacks important, compared to 78 saying the same of office meals. Most also said that having access to healthy snacks in the office is very or extremely important, and more than half said office snacks help them stay healthy.

“From 2005 until 2015, snacks were a significant differentiator, a way to separate the haves from the have nots,” Kelly said. “Snacks are now table stakes. We’ve crossed the threshold where more than 30 percent of offices offer free snacks. Today, you have to make it happen if you’re competing for the best of the best.” He added that snacks aren’t really about snacks. “[SnackNation is] not selling snacks; we’re selling employee wellness, engagement, and retention.”

It’s not just about free snacks, however. Companies are curating their snack selection to be unique and functional, supporting entrepreneurs who offer interesting and healthy products, or as Kelly puts it, “a desire for innovators to help innovators.”

“You can get crappy snacks anywhere, but companies who want a curated selection of quality snacks show that they care about their employees,” Kelly said.

Former tech worker Erica Liu-Williams started baking granola in 2013 as a hobby and selling it at a farmers market. After posting about her product, Gr8nola, on Facebook, an old friend who worked at Google reached out and connected her with the company’s food team. Liu-Williams was invited to participate in Google’s snack fair, where the company’s employees sampled many products and voted for which they wanted in their micro kitchens. Gr8nola made the cut and Liu-Williams had a business.

“Now a lot of brands want to get into offices,” she said. “I never would have thought of that as a channel. In 2013, thinking of even doing an e-commerce brand was less viable. It was all about getting into Whole Foods.”

Getting into Whole Foods was Jordan Buckner’s initial strategy for his snack product, TeaSquares, before he and his co-founder took a step back.

“The next evolution is serving the employee wherever they are.”

“We looked at where our customers were, and found they were aspiring professionals looking to get more out of their days,” he said. “We realized we had to reach them and get it into their hands at their offices.”

Tech employees are also a good customer base for products that are a bit outside the mainstream, and according to the ZeroCater survey, most people will go on to purchase snacks and beverages they discovered through their office’s snack programs.

“Engineers are very picky,” Buckner said. “If they eat the same thing every day, it gets boring. They want new things to try, and so companies can offer snacks as a perk.”

Working with smaller companies like Liu-Williams' and Buckner’s also has another benefit for huge companies such as Google.

“Google is massive, but I feel like I have a connection to them,” she said. “Everyone wants to be sustainable and local. It makes the company more human and caring. Also, their workers care about diversity, sustainability, and plant-based. This worker demographic cares more about brands’ stories.”

But what happens to perks such as snacks when offices aren’t a factor anymore? More and more people, especially in tech, will work from home on a regular basis going forward. Companies including Twitter, Square, and Facebook plan to permanently allow employees to work from home. More are sure to follow, which will surely hurt office food makers and distributors in the short term.

There is hope for some companies, however, that deliver food and snacks directly to people at their homes. Both SnackNation and Crafty now offer an option for companies to provide snack boxes for their remote workers, and Kelly said SnackNation’s work-from-home service has already exceeded expectations. Another option is an online portal that allows employees to order their own selection of snacks paid either by their employer or at a discount. Snack makers are also entering the fray directly. Bruckner said that TeaSquares has teamed with other snack companies to offer snack boxes.

“Offices have employee care budgets, and this is a way to show they care,” he said. “The next evolution is serving the employee wherever they are.”