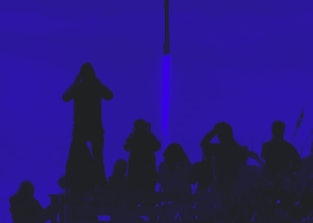 That's how many satellites Elon musk wants to send into space. hE'S NOT ALONE.

Meet the Americans who want Starlink

When James Palashoff and his wife decided to move, it was a decision that would send them back in time.

The 57-year-old from Pittsburgh was hoping to reduce their costs, now that their kids have left home. They chose to move to a secluded rural area in Andover, Ohio that acts as a campsite to about 3,000 people during the summer. But while they currently have internet access at a blazing-fast one gigabit per second in Pittsburgh, their new place offers nothing faster than 20 megabits.

“I haven’t had that slow a speed since…probably in the ’90s,” Palashoff, who used to work for AT&T, tells Inverse.

The private campground has no fiber optic cabling, and Palashoff doesn’t expect that to change anytime soon. In an increasingly-connected society, it’s no longer about powering the family computer: their security camera, TV, Amazon Echo and more all depend on a strong connection.

“I just want to be able to watch TV while my wife’s working on the computer,” Palashoff says. “I won’t be able to do [that] when we move up there.”

Palashoff is one of several Americans placing their hopes in Elon Musk’s latest ambitious plan: to fill the sky with up to 42,000 satellites, far eclipsing the few thousand total in orbit at the moment, to deliver high speed, low latency internet anywhere with a line of sight to the satellites. It’s called Starlink, it’s using Musk’s space firm SpaceX to launch the satellites, and the money could fund even more ambitious plans like a human city on Mars. SpaceX has launched six batches of 60 Starlink satellites so far. It plans to start offering services to the northern United States and Canada this year, and the rest of the world next year. A ground terminal, which Musk has described as a “UFO on a stick,” will be used to connect a home to the service.

For Palashoff and others, it could offer a lifeline. Satellite internet is an enticing prospect – fast connections anywhere, regardless of local infrastructure! – but the market has not quite panned out as a perfect solution. The idea first launched when Eutelsat sent up the e-BIRD in 2003. Today, satellite internet providers like Viasat and HughesNet offer connections to rural Americans. The market for speedy internet hasn't worked out for many of them, either.

"Market forces are what will drive the deployment of 5G," said Blair Levin, who oversaw the FCC's National Broadband report in 2010, speaking to CNet in 2018, referring to the . "The 5G economics are very different than they are for 4G. And cities, because of their density, are in a much better position to drive 5G deployment than rural communities."

A 2013 report found latency can be over 600 milliseconds, 20 times slower than wired internet due to the physics of sending a signal into space and back. That makes it impractical for video games. It’s also around double the price of the average cable price, at around $100 per month. The average speed is around 30 megabits, a far cry from the gigabit speeds in big cities. There’s also no guarantee you’ll be able to get on board: Palashoff says Viasat couldn’t offer them service because they had too many subscribers in the area.

Musk’s plan could answer these issues. Previous documents have shown the company is aiming for gigabit internet speeds, and a latency of 25 to 35 milliseconds. Company president Gwynne Shotwell has called out firms offering poor access for $80 per month, suggesting SpaceX is targeting a competitive price point. In a 2015 speech, Musk suggested the ground terminal could cost between $100 and $300. For the 19 million Americans without access to acceptable broadband speeds, it could be the answer they’re looking for.

“Help us break the monopolies!”

“For people who are lucky enough to have good internet, I’m truly happy for them, but they need to realize not everyone is that lucky and unless you have lived it you will never understand what it is like,” Debbie Dawson, a 62-year-old cemetery maintainer from southeastern Ohio, tells Inverse.

Dawson pays $155 per month for HughesNet, one of the only two options in her area. It comes with a download limit of 50 gigabytes per month, plus 50 gigabytes between the hours of 2 a.m. and 8 a.m. (dubbed the Bonus Zone). Download speeds are advertised as 25 megabits per second, and a reduced speed of one to three megabits after the download limit is exceeded. Dawson argues that she does not receive these speeds, and the company’s recommended troubleshooting steps (switching the router on and off) don’t work.

That means persevering with poor connections. Dawson lives on a 72-acre farm with her husband, a welder, and both grew up in the area. Their 23-year-old son is also a welder.

“Some have said to just move,” Dawson says. “Easier said than done. I have lived on a farm all my life, my husband’s family has farmed and raised Angus cattle for over 100 years. It’s not something you just walk away from.”

For Dawson, a poor connection means staying at work up to three hours late to finish mapping. It means their son struggling to finish job applications or online schoolwork. It means missing out on services like Netflix and Hulu that others accept as part of modern life.

“I honestly had lost all hope until I heard about Starlink,” Dawson says. “I can’t even tell you how excited I am for it to be up and running.”

Shawn Savage, a 32-year-old pilot on the intracoastal waterway who pushes chemical barges with a towboat, has lived in the northwoods of Wisconsin with his wife for the past three years. They pay $178.27 to ViaSat for speeds up to 30 megabits, but a speed test showed a speed of just 4.45 megabits with latency of 618 milliseconds. They have a cap of 150 gigabytes per month, after which it becomes “essentially unusable.”

“We disable all updates on our phones and systems and take them to McDonalds or use cell service when we go to town instead of putting the data against our cap,” Savage says.

Savage would be willing to settle for almost any conditions with Starlink, even if it was launched with five-megabit speeds and 100 milliseconds of latency. He’d be willing to get two subscriptions, one for the boat he works on every two weeks out of four. He even claims he’s willing to pay up to $10,000 for the ground terminal “out of spite” for his old provider.

“We live in a rural area and the demographics here are people who are very old and not technologically minded,” Savage says. “Even with that there are constant posts on our little town Facebook page of people looking for options or complaining.”

Even people that don’t depend on satellite internet are excited. Louise Dutton, a retired South Florida resident who has lived in the same property for 50 years, tells Inverse that she’s paying $80 per month to Comcast for slow connections. Unfortunately, there is practically no alternative in their area.

Not everyone is so excited. Musk’s plans have drawn concern from the astronomical community, who worry about the impact of Starlink on their work. Since the first launch in May 2019, astronomers have reported streaks of light across observations. The early batches can be seen with the naked eye in the right light conditions. Astrophotographer Thierry Legault told AviationWeek that even at their operational 550-kilometer (a little over 341 miles) altitude, the brightest Starlink satellites reach a magnitude 2.5. That’s about as bright as some of the stars in the Big Dipper constellation.

SpaceX has worked to rectify these issues. It has been holding monthly meetings with the American Astronomical Society to understand the issue. It’s also started adding a non-reflective coating to satellites.

But even if it satisfies astronomers, it’s still a mammoth task ahead. A similar plan was outlined before the year 2000, dubbed Teledesic. The $9 billion idea, backed by Bill Gates, would have launched 840 satellites to provide internet speeds of up to 720 megabits per second. By 2002, it had significantly cut back its staff and reevaluated its plans.

The rewards for SpaceX could be significant. Musk has said the global internet access market could be worth around $1 trillion. That means capturing even five percent of that market would prove highly lucrative.

The money could be used to fund SpaceX’s broader plans, like a city on Mars by 2050 that could cost up to $10 trillion. Jack Ma, believed to be China’s richest man, questioned the Mars city plan in an on-stage appearance with Musk in August 2019.

Musk is no stranger to attention-grabbing ideas, headlines and controversies. But for the fans anticipating Starlink, these things come secondary to a more fundamental point: internet access is critical in contemporary society, and poor connections can leave communities feeling isolated.

“To be honest, I hadn’t heard of Elon Musk before my son told me about him,” Dawson says. “I now follow him. He appears to be very smart and a very interesting person, and my new hero for thinking of us who live in rural areas. He feels like we deserve decent internet too. Thank you, Mr. Musk!”