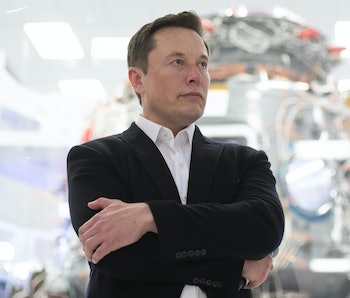 And for our premium members — last week, you learned about Moon Bikes. This week, you will hear from author Jimmy Soni about what Musk's earliest success reveals about his management style.

Musk quote of the week: “They will be fine” — Elon Musk tweeted in response to a user wondering “How can I feel good about bringing kids into the world given climate change?” The real answer is much more complicated; the next few decades are fraught, and some children are already experiencing the worst of what climate change has to offer. Read more on Inverse.

Tesla: Against the law

Tesla is having some trouble with law and order (dun dun!). According to a publicly available court record, Elon Musk has accused a Securities and Exchange Commission staff member of “illegally leaking the results of an investigation,” reports CNN.

“The allegations in a court filing did not disclose the contents of the alleged leak, the name of the staff member who is alleged to have leaked the information or where it was reported,” CNN continues. But the allegations are a new page in Tesla’s four-year old clash with the SEC, which started when Musk wrongfully claimed he was taking Tesla private in 2018. Musk ended up settling, stepping down as Tesla chairman, and signing a consent decree.

Tesla has some localized swelling, too. Tesla is urging its Oklahoma fans to oppose the state’s House Bill 3994, which “could force Tesla to close its existing locations in Oklahoma and prevent Tesla from shipping cars to anyone in the state,” the company says. Tesla could face additional issues in West Virginia, which now “wants to ban Tesla and other automakers from sending out over-the-air updates, among other things, to vehicle owners,” reports CleanTechnica.

But some states are still friends with Tesla — Giga Texas will host its highly anticipated, invite-only homecoming on April 7.

Take a look at this impressive 360-degree video SpaceX shared of unstacked Starship.

The video captures the dusty beaches surrounding SpaceX’s South Texas launch site and the behemoth size of not only Starship, but also the massive silver launch tower, which is too tall to fit in frame.

But Starship’s massive size and its existence as a symbol of hope for the new era of spaceflight is what really sparks South Texan pride. The Brownsville South Padre Island International Airport recently requested its own Starship prototype to display, fittingly, on the nearby Starship Road.

“Sounds good,” replied Musk. “We will send one over.”

10. Elon Musk wrote on Twitter that Tesla plans to open a “futuristic diner/drive-in theater” in the “Hollywood area.” “And, of course, you can pay in Doge,” he said.

9. Musk jumps, and the world says, hey, I like jumping too. Quincy University in Illinois will now accept donations in cryptocurrency, including Dogecoin and Shiba Inu. Invest in Mark Zuckerberg’s future.

8. Brownsville climate change activist, Bekah Hinojosa, allegedly spray-painted the words “gentrified” and “Stop SpaceX” below a mural some Brownsville residents find to be distasteful. Last week, she was woken up to a terrible surprise — Hinojosa was punished for the graffiti (a Class B misdemeanor that requires no arrest) by being put in jail, having her glasses removed, and getting her mug shot plastered across the internet by Brownsville mayor Trey Mendez. The graffiti is already gone.

7. A recently published opinion piece in CarBuzz suggests that overzealous Tesla fans are “hurting the shift towards electric vehicles.” Ideas, not brands!

6. InsideEVs published a list of the “cheapest EVs with over 250 miles of range,” a useful list for any prospective electric vehicle owners concerned they have to spend a lot to get a lot. Tesla’s Model 3 wins the “cheapest sedan” spot.

5. Car engineer Sandy Munro continues his YouTube series taking Tesla vehicles apart little by little to discover their most minute secrets. He’s not too happy with what he found in Tesla’s Plaid doors, though. Too many weird holes.

4. Virgin Hyperloop slashed 111 employees — half of its staff — as it pushes a shift from “passenger transport to freight,” reports Business Insider. It’s not looking good.

2. A team of researchers is working on getting to Mars via laser. It could reduce travel time from Earth to Mars by 45 days.

1. And a piece of Musk history: Engineer and SpaceX fan Pranay Pothole shared a 2003 newspaper clipping sharing how a curious “new rocket” backed by “Internet entrepreneur Elon Musk” could save people some money. Although a modern day Musk saw the clipping and groused about how it is “taking longer than expected to make the upper stage not expendable,” it demonstrates how far a company can go in nearly 20 years. Here’s to the next 20.

The ultra-fine print — This has been Musk Reads #286, the weekly rundown of essential reading about futurist and entrepreneur Elon Musk. I’m Ashley Bardhan, newsletter writer at Inverse.