At the “Roof of the World,” solar power is a necessary evil

“We’re waiting for another way of life.” 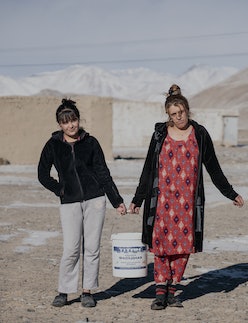 “Electricity would change all aspects of life,” Munira Niyozbekovo, 44, says, as she puts on a sweater to fetch water from the public well in the eastern Tajikistan town of Alichur.

“We could wash our clothes, warm our hands in hot water, heat the whole house,” she continues. “We could have hot showers in winters.”

But since the fall of the Soviet Union and Tajikistan’s subsequent independence in 1991, neither state-supplied electricity nor state water has reached Alichur, a town of 2,000 people that sits 13,000 feet above sea level in the Pamir Mountains.

“We were abandoned up here.”

The Soviets once provided Alichur with electricity from hydroelectric power plants situated further west, near the distant capital of Dushanbe, linking the Pamirs’ isolated communities to the rest of Soviet Tajikistan. The construction of the Pamir Highway and the availability of cheap and stable electricity were impressive infrastructural feats. But a violent post-Soviet power struggle that began in 1992 and only ended in 1997 scuppered any further progress — and destroyed with what little there had been till then.

“These mountains became a prison,” Niyozbekovo recalls. “We were abandoned up here. All roads were closed, and everything was cut off. We starved and depended on international aid organizations.”

The temperature is rising faster in Tajikistan’s Pamir Mountains (elevation 25,095 feet) than the global average. These are the stories of the people living through our coming climate crisis, today.

For the past 30 years, the people of Alichur have played on the losing side of a waiting game with the authorities in Dushanbe, who’ve consistently promised both functioning infrastructure and job opportunities but failed to produce either.

Meanwhile, the people of Alichur depend on two sources of energy. They use coal and manure-powered wood stoves for cooking, washing, and heating — which generate toxic indoor air and emit carbon dioxide. They also use solar power.

“Solar power has helped us a lot. It can charge our phones.”

Alichur’s acceptance of solar power (obtained with the help of outside actors) might serve as proof of the benefits of the fossil-fuel-free energy alternative that also doesn’t require the kind of physical infrastructure federal and regional authorities have found difficult or lacked the will to maintain since the fall of the Soviet Union. Access to affordable, sustainable, and modern energy is also an integral part of the UN’s Sustainable Development Goals — as is available and sustainably managed water — in no small part because the lack of a stable supply of electricity and water keeps millions of people worldwide — especially women — tied to domestic chores.

But solar power in Alichur is also finicky and unreliable depending on the weather, and the panels the town uses are rusty and outdated.

“Sure, solar power has helped us a lot,” Niyozbekovo says. “It can charge our phones, but we don’t consider it to be what’s gonna make the town last in the long run.”

Since independence, thousands of women in the Pamirs have become reluctant housewives due to widespread unemployment in Tajikistan and the post-Soviet necessities of life somewhat off the grid. Niyozbekovo was born in Alichur. Her parents worked for a road construction company and a livestock cooperative — jobs created by the Soviet system that dissolved in 1991 when she was 14.

To earn money, Niyozbekovo makes wool gloves, hats, and socks to sell at the public market in Murghab, 64 miles away. “It’s all I’ve got for an income,” she says. “I learned the craft as a teenager, knowledge passed on from my mother, who learned the craft from my grandmother.”

“You know,” she adds, “We could do something with our lives other than just producing objects that symbolize our past.”

There might be some signs of changes in Alichur, though.

“There are rumors that we can expect to have hydroelectricity here in 2022,” Niyozbekovo says.

What might happen to solar power if hydropower becomes an option in Alichur remains anyone’s guess. It’s unclear if people in this small mountain community could expect subsidized prices on any hydroelectricity brought in from the power station in Khorog, 131 miles west.

The concern with unsubsidized power? “Few would have the means to pay for any other electricity than those of a generator anyway,” Niyozbekovo says. “I guess we’ll just have to wait and see.”

Yet when extreme weather hits Alichur — like when temperatures drop, as they did last winter to minus 76 degrees Fahrenheit (-60 Celsius) — all the people here can do is wait and hope to survive another year.

Niyozbekovo knows a lot about waiting; she has done so for much of her adult life.

“We’re waiting for another way of life.”

This is part three in a three-part series: The climate crisis at the Roof of the World.