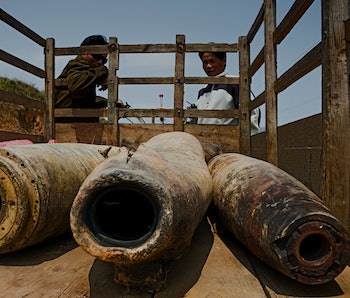 During the Vietnam War, the United States dropped nearly 3 million bombs on Cambodia, and many that failed to explode at the time remain in the country today.

Locating these bombs on foot so they can be disposed of is a dangerous job, but a new artificial intelligence model that utilizes very high-resolution satellite images could speed up the search and save lives in the process.

With this A.I., bomb-hunters can identify the craters where many of these still-live American MK82 bombs sit, waiting to go off.

A study published in the journal PLOS One on Wednesday explains how researchers from Ohio State University created an algorithm to automatically detect these craters in those satellite images.

Essentially, researchers adjusted a model that diagrams meteor craters on the Moon to identify bombs on Earth. The two types of craters have various differences but none so obvious as to trigger a difference in the machine learning program developed to spot meteorite craters.

"Key differences between bomb craters and meteor craters may result in these methods undercounting the bomb craters on satellite images.

"First, bomb craters experience various levels of erosion and vegetal overgrowth over time, unlike meteor craters, which are situated on extraterrestrial surfaces that lack atmosphere and vegetation," the study authors write.

"Second, bomb craters are relatively small in size from a remote sensing perspective, typically only 3 to 12 meters in diameter and much harder to find that meteor impact craters, which can be up to 3,000 meters in diameter."

A meteor crater typically has a simple, circular shape, whereas a bomb crater may have an unusual shape due to erosion and other factors. The researchers had to develop a system that could detect the bomb craters that existing systems were missing. To do that, they developed a learning method that uses a two-stage framework.

The researchers had to first make their system allow for more unusual shapes as it attempted to identify bomb craters.

They then have it analyze patches of the satellite image to locate bomb craters, and it unsurprisingly produced some false positives.

The next step involved the system separating the false positives from the positives by analyzing the images using knowledge of characteristics that are common among bomb craters.

The researchers claim the model they developed increased the accuracy of bomb crater detection by more than 160 percent.

Landmines and unexploded bombs have killed roughly 20,000 people in Cambodia since 1979, and they've injured nearly 50,000 Cambodians.

Not all of these deaths are connected to the Vietnam War, as the Khmer Rouge utilized landmines heavily under Pol Pot between 1975 and 1979 to defend the country from Vietnamese attacks.

There are currently seven organizations working to dispose of landmines and unexploded bombs in Cambodia, and some die doing this work. If the model these researchers developed could help these organizations accurately identify where these unexploded bombs are without having to seek them out on foot, that could save many lives.

It's tragic how many people are still suffering the consequences of a war that ended decades ago. We were essentially bombing indiscriminately back then, and many have died since we left because of the bombs that stayed behind—waiting to blow. It's good to see that researchers are still developing new ways to locate them so we can hopefully someday get to a point where people aren't senselessly dying in this way any longer. How strange it is to be using 21st-century technology to solve problems from the 1970s.

Abstract: Unexploded ordinance (UXO) pose a significant threat to post-conflict communities, and current efforts to locate bombs rely on time-intensive and dangerous in-person enumeration. Very high resolution (VHR) sub-meter satellite images may offer a low-cost and high-efficiency approach to automatically detect craters and estimate UXO density. Machine-learning methods from the meteor crater literature are ill-suited to find bomb craters, which are smaller than meteor craters and have high appearance variatian, particularly in spectral reflectance and shape, due to the complex terrain environment. A two-stage learning based framework is created to address these challenges. First, a simple and loose statistical classifier based on histogram of oriented gradient (HOG) and spectral information is used for a first pass of crater recognition. In a second stage, a patch-dependent novel spatial feature is developed through dynamic mean-shift segmentation and SIFT desciptors. We apply the model to a multispectral WorldView-2 image of a Cambodian village that was heavily bombed during the Vietnam War. The proposed method increased true bomb crater detection by over 160 percent. Comparative analysis demonstrates that our method significantly outperforms typical object-recognition algorithms and can be used for wide-area bomb crater detection. Our model, combined with declassified records and demining reports, suggests that 44 to 50 percent of bombs in the vicinity of this particular Cambodian village may remain unexploded.