"Covid has brought death out of the shadows and onto the front page of every newspaper. " 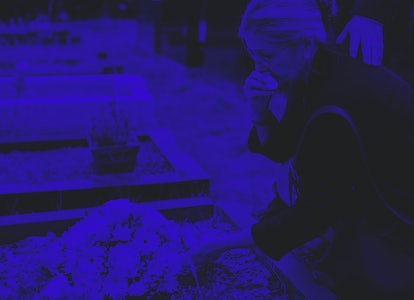 Death is one of life's bitter certainties, yet having conversations about it can be difficult or uncomfortable. But in a year like 2020, witness to so much grief and death, being able to have these conversations effectively is more important than ever.

In a new study published Wednesday in the journal PLOS One, a team of Australian researchers designed an experiment to better understand how the words we use to discuss this topic can reflect inner emotional turmoil or calm. Through their study, they found that exposure to these topics over time is key to unlocking a more peaceful understanding of death.

Why it matters — A better understanding of how we discuss death not only enables better conversations between friends and families, it also helps craft more compassionate healthcare policies and infrastructure.

The backdrop — While some cultures are more comfortable discussing mortality than others, in the West these conversations can be difficult to even begin. The authors of this new research speculate that this may be in part because social structures, like nursing or palliative homes, implicitly mean less direct interaction with death.

"Understanding how our perceptions and experiences of death and dying shapes our views and actions is important."

Jennifer Tieman, the director of Flinders University's Research Centre in Palliative Care, Death, and Dying, tells Inverse that conversations about death may also be avoided out of fear of upsetting others or a fear of emotional intimacy. Fears and uncertainties surrounding death were made worse in 2020, as record numbers of people died during the Covid-19 pandemic.

"Covid has brought death out of the shadows and onto the front page of every newspaper," Tieman says. "For many people, the uncertainty about how and if they could contract it and what will happen if they get sick can create distress.

"The pandemic has also caused us to think about how we manage our communities to keep them safe and how we provide care — including care for the dying when the demand and need for care keeps increasing ... Covid-19 has caused us to stop and think and maybe rethink some things about death and dying."

But before they could begin reengineering these end of life systems, Tieman and colleagues had to first understand the words within people's final conversations.

What they did — To do this, they analyzed the language of 1,491 participants of an online course called "Dying2Learn" which walks participants through a number of different modules on topics like the depiction of death in popular culture and history and the impact of an online legacy after death.

In order to analyze the emotion behind these words, the team used an algorithm to determine each word's "sentiment score," which is composed of three different components:

This discrepancy may explain why these conversations are so difficult to broach, Tieman explains. In other words, we may be imagining that people don't want to have these discussions even if they do.

The study team also noticed younger course participants showed a more significant shift from using negative language to positive language by the end of the course, indicating that exposure to these conversations may be especially important for this demographic.

What's next — There's still much to be learned about how we process death, and especially how this may change in the wake of Covid-19. For now, Tieman says her team is interested in how techniques like sentiment scoring might be used to better understand other parts of human behavior as well.

"We are keen to see if sentiment analysis can help us understand the differences between different constructs or ideas. For example, is the sentiment around advance care planning different or the same as for euthanasia or Covid-19?" Tieman questions.

"As a community that is aging, and as a society that is being changed by Covid-19, understanding how our perceptions and experiences of death and dying shapes our views and actions is important."

Abstract: Understanding public attitudes towards death is needed to inform health policies to foster community death awareness and preparedness. Linguistic sentiment analysis of how people describe their feelings about death can add to knowledge gained from traditional self-reports. This study provided the first description of emotive attitudes expressed towards death utilising textual sentiment analysis for the dimensions of valence, arousal and dominance. A linguistic lexicon of sentiment norms was applied to activities conducted in an online course for the general-public designed to generate discussion about death. We analysed the sentiment of words people chose to describe feelings about death, for themselves, for perceptions of the feelings of ‘others’, and for longitudinal changes over the time-period of exposure to a course about death (n = 1491). The results demonstrated that sadness pervades affective responses to death, and that inevitability, peace, and fear were also frequent reactions. However, words chosen to represent perceptions of others’ feelings towards death suggested that participants perceived others as feeling more negative about death than they do themselves. Analysis of valence, arousal and dominance dimensions of sentiment pre-to-post course participation demonstrated that participants chose significantly happier (more positive) valence words, less arousing (calmer) words, and more dominant (in-control) words to express their feelings about death by the course end. This suggests that the course may have been helpful in participants becoming more emotionally accepting in their feelings and attitude towards death. Furthermore, the change over time appeared greater for younger participants, who showed more increase in the dominance (power/control) and pleasantness (valence) in words chosen at course completion. Sentiment analysis of words to describe death usefully extended our understanding of community death attitudes and emotions. Future application of sentiment analysis to other related areas of health policy interest such as attitudes towards Advance Care Planning and palliative care may prove fruitful.

More like this
Science
5.14.2022 12:30 PM
Omicron subvariants: An epidemiologist answers 5 essential questions
By Louis Jacobson and Kaiser Health News
Mind and Body
5.17.2022 8:41 PM
Mysterious hepatitis outbreaks in children are confounding doctors — here's why the cause is still unclear
By Katie MacBride
Mind and Body
5.16.2022 12:30 PM
Study: Being close to nature reduces the risk of stroke
By Nick Keppler
Related Tags
Share: