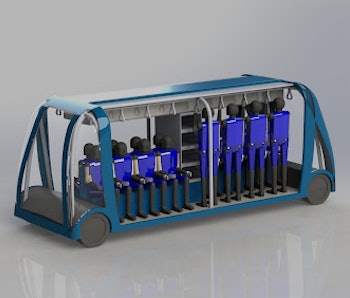 Mass transit researcher Xiaofan Zhang is a big thinker, but he’s not a big fan of traffic. Frustrated by all the congestion in his city of Cambridge, England, Zhang dreamed of creating a high-tech, tunnel-based public transportation system — a nearly tangible idea that culminated in a 2020 proposition that could have supported thousands of commuters daily. Like subways, but better.

Tunnels were a transit epiphany for Elon Musk, too. The Boring Company founder first started to really dig the idea of tunnels — in public at least — in January 2016 while at a Hyperloop design competition at Texas A&M University.

“It’s not that hard, but if you have tunnels in cities, it would massively alleviate congestion,” Musk told the gathered students at the time, as Inverse reported. You could have tunnels at all different levels, you could have 30 layers of tunnels, and completely relieve the congestion problem in high-density cities. So, I highly suggest tunnels.”

A few years and a lot of tweets later, Musk unveiled a 1.14-mile test tunnel by SpaceX’s campus in Hawthorne, California. He also explained his vision for “individualized mass transit.”

The result was the Boring Company, which would dig tunnels around 14 feet in diameter, smaller than the standard 28-feet-diameter tunnels, to save on tunneling costs. It would support electric, autonomous cars moving at speeds of up to 150 mph. Stacks of up to 16 tunnels would overcome induced demand issues, Musk claimed.

But Zhang represents the next generation of mass transit thinkers.

Want to know more about Zhang’s big ideas, the way his company could have rivaled Musk’s, and if Zhang succeeded in transforming Cambridge? Read the full interview with researcher Xiaofan Zhang, only in MUSK READS+.

Zhang, who now works for electric automaker Rivian, says he’s been “following Tesla for a long time.” In particular, he cites Musk’s 2013 TED talk, where he spoke with curator Chris Anderson.

“That was one of my big inspirations from back in the day,” Zhang tells Inverse. “I don't necessarily agree with everything Musk says, but I quite enjoy the big-picture thinking, the innovation there, and the recognition that climate’s an issue.”

Similar to Musk, Zhang was inspired by bad traffic to take action. In the English city of Cambridge drivers spent 23 days per year stuck in traffic — the worst of 18 British cities analyzed in the study, and nearly double that of London.

The 2011 census showed Cambridge’s built-up area had a population of 158,434. At 9,737 people per square mile, it’s denser than Los Angeles — the city that originally pushed Musk into action.

The city’s historic center looks poised to clash with its growth: Cambridge has the highest rate of patent applications in the country, and the government announced in February 2021 plans to “unleash the [wider] area’s potential as a global innovation powerhouse.”

Zhang decided to take action — so he formed a company, CamCross Mobility, to uniquely answer the needs of the area.

MUSK READS+ is a fully independent operation. We are not Elon Musk, nor are we employed by him. Our job is to report the events we find noteworthy, giving you the inside look at the worlds of space rockets, electric cars, clean energy, and more. It means first-hand accounts of a SpaceX rocket launch, Tesla insights from third-party analysts, and more.

More like this
Innovation
7.2.2022 6:00 PM
Are self-driving cars safe? The tipping point rests on a psychological illusion
By Jean-François Bonnefon and The Reader
Innovation
7.1.2022 10:00 AM
Robots are ready to get touchy-feely
By Sarah Wells
Innovation
6.29.2022 10:05 PM
The 6 best outdoor motion-sensor lights
By Vanessa Spilios
Related Tags
Share: