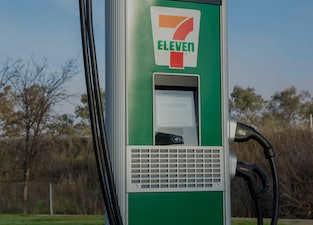 A store most famous for taquitos and the Slurpee might not be your first thought when it comes to forward-thinking retailers.

But 7-Eleven is working hard to be environmentally friendly, adopting aggressive sustainability goals and promising to support the electric car market with a new EV charger commitment.

7-Eleven is promising to install DC fast chargers at 250 stores in the U.S. and Canada by the end of 2022, allowing electric car users to juice up while they run in to grab a snack.

A 7-Eleven spokesperson told Inverse that electricity would be paid for by the minute or the kWh depending on the location, but it’s easy to imagine promotional tie-ups like getting a free five minutes of juice with every purchase of Bang energy drink or something.

The best-known (and best, if we’re honest) charging network is the Supercharger from Tesla. Easy-to-use and ubiquitous across the country, the Supercharger is the number-one reason to buy a Tesla these days. The chargers are fast and dead-simple to use: pull up, plug in. There is no step three.

But the Supercharger was specifically built as a marketing play. The glowing red chargers are a shining beacon to all signaling that a Tesla Model S-X-3-whatever is the only EV to buy. But while Tesla’s expansive network is great news for the many hundreds of thousands of Tesla owners, it doesn’t help the rest of the industry.

Theoretically, there’s a lot of competition in the public charging space. ChargePoint, EVgo, and Electrify America are all investing huge sums (especially that last one, which is funded by $2 billion Volkswagen had to cough up as part of the Dieselgate settlement) in charging networks with no clear indication of when they’ll get a return on their investment.

Fast chargers are really expensive, not just because of the chargers themselves, but because of real estate needs and especially the utility infrastructure needed to support the multi-megawatt charging needs of a large, multi-vehicle-capable station. Charging networks need to recoup their costs somehow, either through public subsidization or charging fees.

Taquitos and a recharge — Retailers can make a different play, which is why so many shopping malls (themselves an endangered species these days) are racing to install fast chargers to attract well-heeled EV-owners who will shop while their cars juice up. So what does 7-Eleven stand to gain?

7-Eleven doesn’t make its living off refueling cars. Many of its locations don’t sell gasoline at all, but the chain slings Slurpees and coffee and Bang energy drinks all day long. Installing chargers to entice customers isn’t a bad play, especially for a small pilot like this one. 500 charging ports seems like a lot, but 7-Eleven is only promising them at 250 stores across Canada and the US. (The company has close to 10,000 locations in North America alone.)

7-Eleven CEO Joe DePinto said in a statement that installing the new EV charging stations “is good for our customers and our planet and it’s the right thing to do.” If it helps sell some Slurpees too that’s just a perk, right?

More like this
Innovation
6.24.2022 5:00 AM
Beam-steering radio technology could help autonomous cars finally hit the road
By Sascha Brodsky
Innovation
6.29.2022 6:00 PM
Can cars run on water? The science of a TikTok conspiracy theory, explained
By Andrew Moseman
Innovation
7.2.2022 6:00 PM
Are self-driving cars safe? The tipping point rests on a psychological illusion
By Jean-François Bonnefon and The Reader
Related Tags
Share: