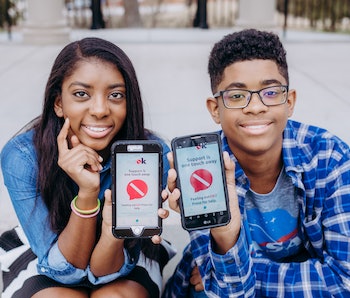 Hannah Lucas was inspired to create an app-based “panic button” in the moment she needed one the most: after a suicide attempt during a difficult battle with depression in her freshman year of high school in Atlanta. Within a year, she and her brother Charlie had created the app notOK, which allows users to instantly alert five trusted contacts at the onset of a mental health crisis. Now, one year after notOK’s launch, she’s hoping to bring what she’s learned about mental health to the Georgia legislature.

“We came up with the idea for the legislation because unfortunately at my school there was this girl around my age who did end up dying by suicide two weeks before Christmas,” Hannah, an energetic, outspoken 17-year-old junior in high school, tells Inverse. With the help of their mother Robin Lucas, Hannah and 14-year-old Charlie are hoping to make mental health first aid certification a necessary part of teaching certification across the state.

“Because I didn’t know her, and I wasn’t around her 24/7, I didn’t know the things to look for,” Hannah says. “Those teachers are the ones who get to know us quite personally, really.”

“Virginia just cast this really cool bill, so we’re hoping to borrow the language from that and we just found two representatives who are going to champion it for us,” adds her mother Robin Lucas.

She’s referring to Virginia laws passed in 2018 that mandated mental health first aid training in public schools for teachers. Georgia appears ready for the family’s efforts: In January, governor Brian Kemp proposed an extra $8.4 million for the state’s little-known Apex program, designed to detect mental health issues in students and treat them before they can worsen. Robin says they plan to bring the bill at the start of the next legislative session. But they’ll be very busy in the meantime.

It’s OK to be Not OK

The notOK app grew out of Hannah’s realization that her network of trusted family and friends are crucial in a mental health crisis. Suddenly diagnosed with an invisible illness that led to physical issues, alienation at school, and severe depression, she attempted suicide, but her mother intervened. “When we both calmed, she asked me what I was thinking and I said, ‘I wish there was a button I could press to tell you I wasn’t okay,’” Hannah wrote in Teen Vogue.

When a notOK user hits the app’s panic button, anyone who is listed as a “trusted contact” will receive a text saying the user is “notOK,” along with their location. These people are encouraged to call, text, or physically go to the user to offer support. When the situation is addressed, the user can send a follow-up alert to let their trusted contacts know.

Charlie, who’s been programming since he was seven, built the app. “She told me her idea and I was like, ‘I’m gonna do that. Let’s go,’” he says nonchalantly.

"I’m saying this because I had to learn to do that, you know?

CDC estimates show that 20 percent of adolescents nationwide have a diagnosable mental health disorder and that one-third have symptoms of depression. As rising suicide rates in America and worldwide show, the vast majority are not addressed. The notOK app doesn’t just build on the importance of peer networks for support when a person is “not okay”; it also helps people recognize when their loved ones are in need of professional help or support. For the vast majority of kids and parents who are untrained in mental health first aid, it can be hard to tell.

“I’m saying this because I had to learn to do that, you know?”

One Day at a Time

Life has become far busier for the Lucas family in the year since they’ve launched notOK. In addition to bringing their proposed bill to the 2020 Georgia legislative session, they are preparing to launch the app in other countries by adding Spanish and French translations: “Don’t worry Canada, we’re coming for you!” says Hannah. In June, they’ll be speakers at the Mental Health America conference in Washington, D.C.

Between it all, they do their best to weather the ups and downs of adolescence, just like any other American teens. Though, encouragingly, their candid, honest conversations about mental health and their own experience of it seem to be ongoing, even outside the world of their app.

Hannah’s well aware of the winter weather’s affect on her mood, saying it “changes my lack of vitamin D — you know, being a black vampire at all!” Charlie, meanwhile, is relishing the busy schedule notOK has helped create. “Now I do my homework and have, like, three minutes of free time, and I like it like that.”

Like other teens, they watch a lot of Netflix. They’re particularly into One Day at a Time, a sitcom representing the emotional life of a Latinx family, and Alexa and Katie, which depicts the struggles of people with chronic illness. “It’s not just the illness that they’re dealing with,” says Hannah. “It’s figuring out what their normal is.”

During rough periods, says Hannah, she’s grateful for the emails she gets from users of notOK thanking her for creating the app. They made her think: “Wow, great, now I’m not just living for myself. Now I have to keep on living. I have to keep on thriving.”

“I would really like to tell people asking for help that it’s okay to be not okay,” says Charlie. “It’s okay to be where you are right now. We just have to get through it.”