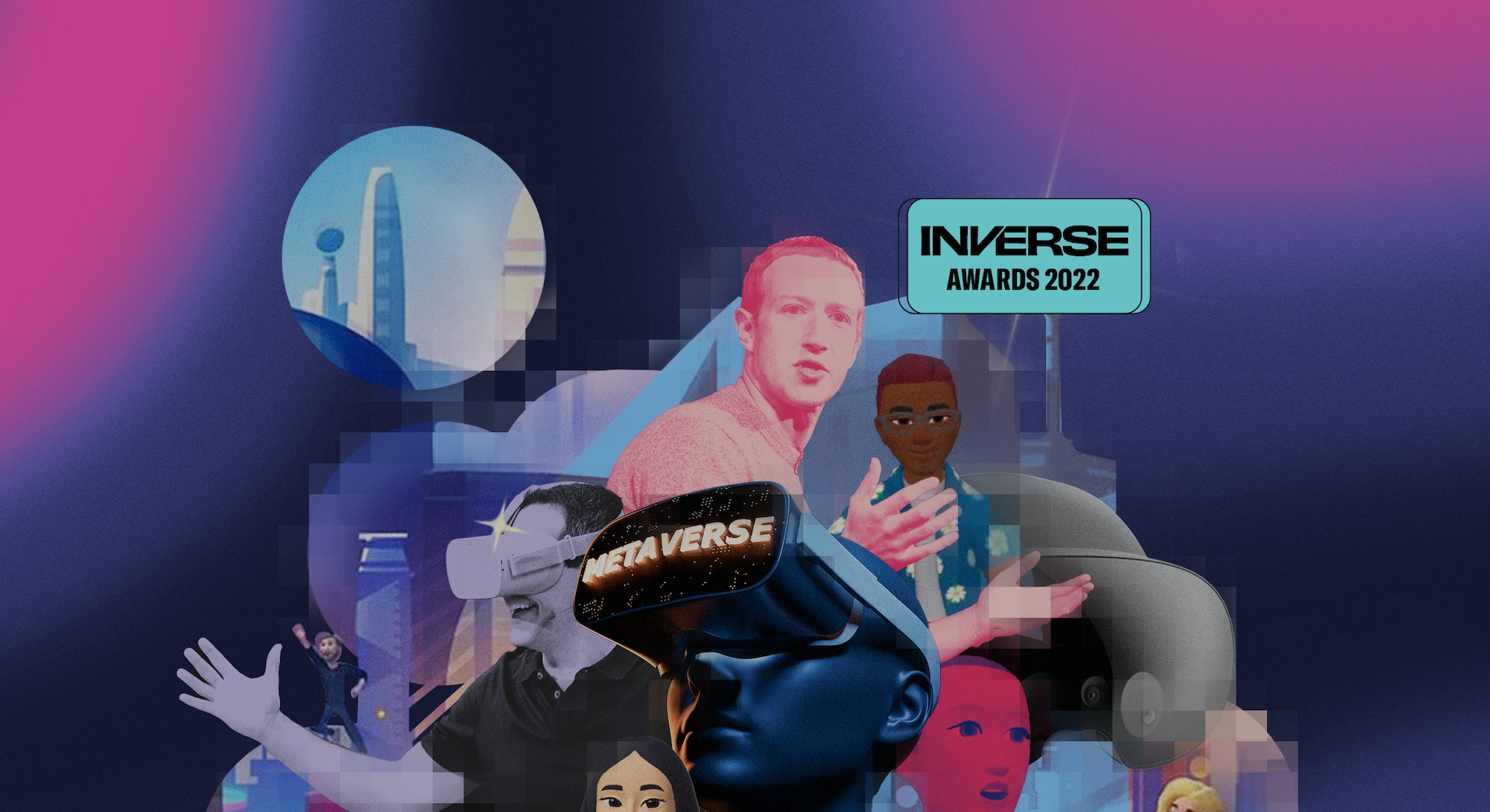 Even if you’ve never dipped so much as a virtual toe inside the metaverse, in many ways, you’re already swimming in it.

Just take a look at the headlines. The term itself was narrowly felled by “goblin mode” for Oxford Dictionary’s Word of the Year, and yes, it did lose, but only in a technical sense. For concepts, cultural cachet is equally as important as silicon.

Its popularity isn’t an accident. The metaverse’s explosion has almost everything to do with a little company you might have heard of. I’ll give you a hint: it starts with “M” and ends with “eta.” With a simple name change — and about $10.2 billion in R&D — Mark Zuckerberg ushered in an explosion of speculation over the inert potential of a new, more immersive, internet. “We basically think of the metaverse as the successor to the mobile internet in the sense that the mobile internet didn’t completely replace everything that came before it,” Zuckerberg told Inverse last year.

Since then, Zuckerberg and his social media empire have driven full force into the prevailing winds of virtual reality and nestled themselves smugly at the epicenter of the metaverse storm’s eye. And though Meta has centered itself around the conversation, providing the spark to propel the metaverse forward, it’s not the only brand carrying the resulting torch.

For companies like Roblox — a game-turned-social-media-platform that boasts about 60 million daily active users — the metaverse isn’t a question. According to Craig Donato, Roblox’s chief business officer, the metaverse is objective. It’s right here, right now.

“Ignore it at your own risk.”

“It’s kind of ignore it at your own risk, I suppose, if you're a brand,” Donato tells Inverse. “It’s such a big shift in terms of how human beings are interacting, and how they expect to interact with brands and artists in the future.”

And by “human beings” Donato means young human beings. Most of Roblox’s users are between the ages of 16–24 and many of them have never known a world without a near-omnipresent internet. These are what Donato refers to as “natives” to the metaverse’s brave new world.

“There are two kinds of general kind of populations with the metaverse. There’s what I call the metaverse natives, and the metaverse colonists,” Donato says. “The metaverse natives are typically under 21, and their whole lives, they’ve grown up with interactive online gaming… they feel as comfortable, or more comfortable, socializing in digital spaces than they do in the real world.” The metaverse colonists, naturally, live on the other side of that digital divide, according to Donato. “The colonists think there's just a digital world, and the physical world — and the digital world is less than the physical world.”

Both of those parties, however disparate philosophically, mostly gravitate around one common activity: games. As Donato notes, gaming has been the most successful first use case to demonstrate what the metaverse offers, and Roblox, while a major player in the gaming metaverse, is far from alone in its appeal to younger generations.

Fortnite, Epic Games’ wildly popular battle royale shooter has magnetized players, not just with the prospect of enjoying battle royale shootouts, but with hanging out. Fortnite players gather in the metaverse to watch concerts and trailers for upcoming shows or movies. They shop and socialize in brand-curated spaces. Dragon Ball Z, Samsung, Neymar Jr. all want a piece of what Fortnite’s metaverse is doling out.

Just as Facebook is the internet for some people, Fortnite, and the varied experiences it offers players, is an equally as vibrant hub for entertainment, social networking, and commerce — all of the things that make an internet tick.

“The metaverse is really multi-platform.”

One thing that Fortnite does not offer in its metaverse, however, is virtual reality. And that’s not an oversight — it’s by design. According to Epic Games CEO, Tim Sweeney, who recently spoke to The Verge, VR hardware just isn’t ready to handle the kinetic energy of a game like Fortnite. Or more accurately, we aren’t ready to handle it. “The thing that we do in Fortnite every day as gamers is run through an environment rapidly, and it’s the kind of experience that involves intense motion and doesn’t work as well in VR,” he said.

This is where the metaverse butts up against the sobering, cold reality of hardware. Anyone who has played a game in VR knows that the experience can be nauseating. When our brain thinks that we’re moving, but our body remains static, motion sickness sets in.

And then there are other unavoidable factors like weight, size, computational power, hand tracking, audio, and more practical considerations like price.

But even with UX, hardware, and software limitations, believers of the metaverse and its potential are ready to move forward with or without VR. Sandbox, for example — Snoop Dogg and Tony Hawk’s platform of choice — is a web3-focused segment of the metaverse where users can buy digital land and avatars, play games, and socialize with friends in recognizable locales like the Playboy Mansion.

And Sebastien Borget, Sandbox’s co-founder and COO, tells Inverse that the metaverse doesn’t have to wait around for VR to get up to speed.

“We think the mistake of Meta is they adapted the way they talk and present the metaverse. They've tied it too much with the hardware, and as such, they want people to enter the metaverse by having a VR headset,” says Borget.

“The metaverse is really multi-platform. It can be mobile; it can be PC, Mac; it can be a VR, AR, XR. I think it's interesting to think how you can provide experiences with or without continuity.”

“What happens a lot of times with metaverse is people conflate metaverse and VR,” Donato says. “VR is a technology that will make [the metaverse] more immersive, but we've already hit the tipping point for immersiveness in that when you look at kids, even on their phones, when they're playing it, they're inside.”

Still, the emphasis on VR remains. Meta, the biggest proponent of a VR-centric metaverse — and arguably the biggest evangelist of VR in history — hasn’t backed down from its quest to dominate both the metaverse and the hardware we’re urged to access it on.

Though Meta’s President of Global Affairs, Nick Clegg, has acknowledged that the metaverse will be multi-modal — encompassing mixed-reality and AR as well as VR — in practice, VR is still at the center of its plans. Horizon Worlds, its biggest and most metaverse-like platform for socializing and gaming, is positioned exclusively as a VR experience, for example. And immersive work experiences? Well, that will be the job of Meta’s $1,500 Quest Pro headset.

Where Zuckerberg’s obsession with VR and building out a more immersive metaverse will lead is unclear, but so far, the results have seemingly wrought stress on Meta’s bottom line. In November, Meta announced an eye-watering layoff of 11,000 employees. It has since faulted a less-than-ideal economy for its mass firing, but it’s hard to filter out its hefty investments (again, more than $10 billion this year) in VR from the conversation entirely.

In a recent statement from Andrew Bosworth, CTO and head of Meta’s Reality Labs, Meta acknowledged the pressure points its pivot to VR and the metaverse have created. But instead of backing away, the company doubled down on its efforts.

“We’ve made tough calls this year to stop doing some work so we can maintain focus on those things we feel are most important,” he wrote in a blog post released in late December. “But I can say with confidence that after one of the hardest years in the history of the company, Meta remains as committed to our vision for the future as we were on the day we announced it.”

Tepid progress in hardware isn’t the only obstacle, either. A significant portion of the metaverse — including platforms like Sandbox — is comprised of web3 technologies, often with a focus on NFTs and cryptocurrency, both of which have hemorrhaged value this year. To put into perspective just what an awful nosedive of a year it's been: A Bored Ape Yacht Club NFT (easily the most coveted prize in the category) purchased by Justin Bieber in January for $1.3 million was likely worth around $70,000 in November, according to an Insider report.

Despite differing definitions and expectations of what the metaverse can and should be, all proponents agree on one thing: the metaverse has some growing to do. Borget says that he believes it will be about 10 years until we see the metaverse in a mature form — an estimate that mirrors predictions by even the most bullish proponents like Meta. A spokesperson for Meta tells Inverse it will be “years” before its vision is fully formed.

Inevitably, those predictions will elicit eye rolls from onlookers well-versed in the history of tech prognostication — breakthroughs are always “just 10 years away.” But Donato has a message for those detractors, too.

“I would say [critics] should talk to 14- to 16-year-olds. [The metaverse] has already happened, and they don’t know it,” he says. “ And I think they should just listen. And they should realize that the train’s left the station.”