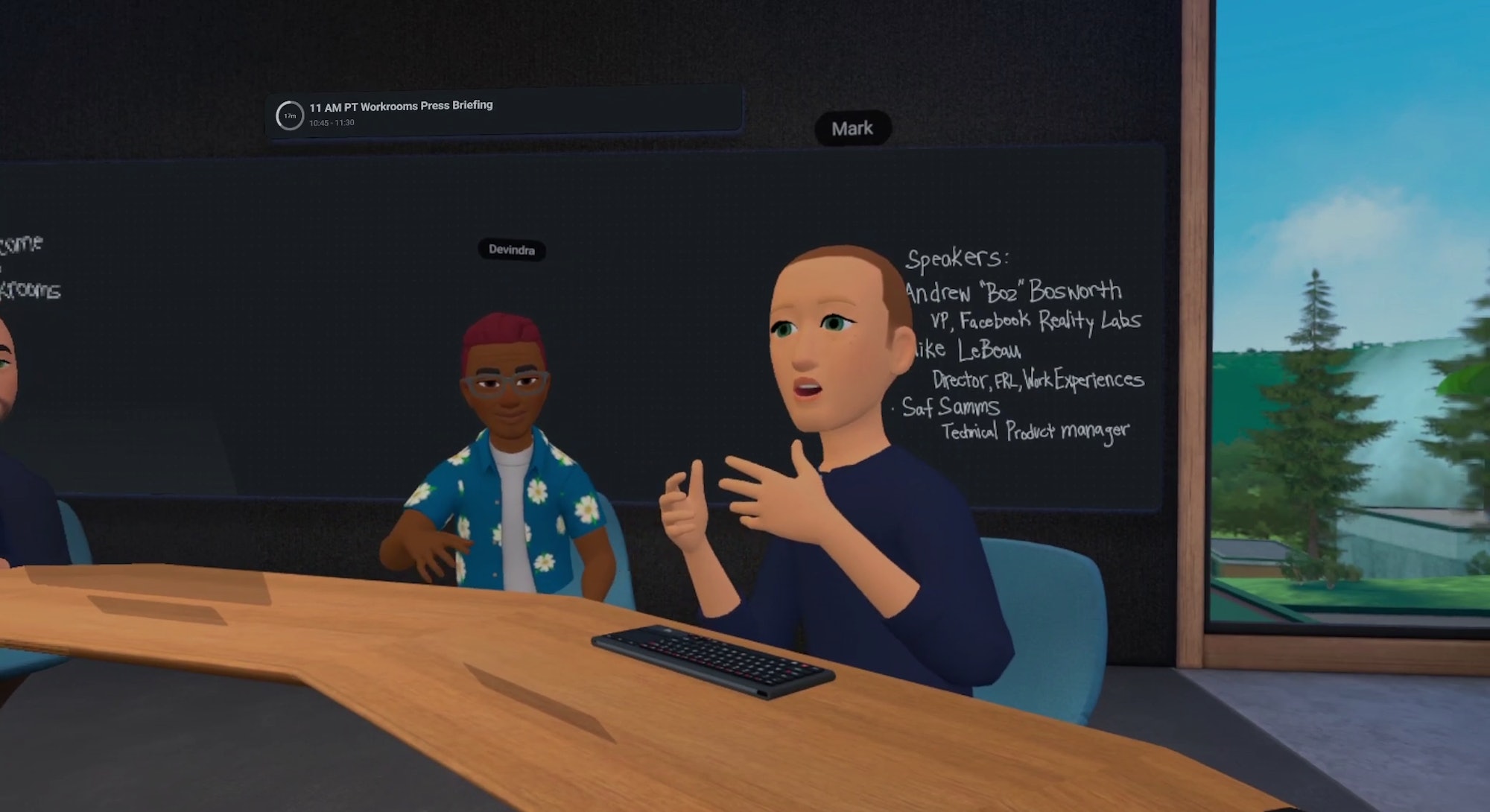 Start familiarizing yourself with the term “metaverse” because you’re going to be hearing a lot about it, not just from Facebook, but other companies that are building out the virtual platform. Mark Zuckerberg sees the metaverse as the “successor to the mobile internet.”

Minutes into a Zoom video call with select members of the media, including yours truly, Zuckerberg popped up in a window to talk about the metaverse ahead of Facebook’s annual Connect conference that focuses on AR/VR.

What exactly is the metaverse? You’ll hear different definitions from different companies and evangelists. In simple terms, the metaverse can be thought of as a virtual world where people can play, socialize, and work in. Think Second Life, but less stiff and way more cartoony — you could enter using VR or AR and get extra immersion through presence and natural input (i.e. hand tracking and voice input), or a regular 2D-based device like a phone, tablet, or computer. Maybe you could enter from a Facebook Portal or a game console like the Nintendo Switch one day.

And where do you enter and who is the gatekeeper? Like the internet, there isn’t going to be one entrance. It might be Fortnite and Roblox and Horizon Worlds and everything in between, all mixed into one just like the internet. We’re all on the internet, but no one company commands it.

“We basically think of the metaverse as the successor to the mobile internet in the sense that the mobile internet didn’t completely replace everything that came before it,” Zuckerberg said. “It’s not that the metaverse is gonna replace everything that comes before it. I think it’s the next platform in that sense. It’s not a thing that a company builds — it is a broader platform that I think we’re all gonna contribute towards building that, hopefully, we’ll be able to do in a way that is open and interoperable.”

“It’s not that the metaverse is gonna replace everything that comes before it.

For all of Zuckerberg’s blindspots — and there are many — he’s been bullishly optimistic about the metaverse since Facebook acquired Oculus for $2.3 billion in 2014. Facebook and Instagram and WhatsApp have swallowed up enormous audiences around the world, but what comes next?

It’s the metaverse, according to Zuckerberg. He’s gonna keep preaching about the metaverse and throwing money at it until he single-handedly makes the platform happen or it flames out spectacularly.

The investments Facebook is making with Oculus VR/AR — Horizon Worlds, Horizon Workrooms, Quest for Business, and even games like Beat Saber — are all groundwork for this immersive platform. Slowly, the pieces are coming together, said Zuckerberg and Facebook CTO Andrew Bosworth (aka Boz).

“There are a lot of foundational aspects of [the metaverse] that we hope to accelerate the development of, and we’ll participate in, but this isn’t a thing that any one company is going to do,” Zuckerberg said. “We think about the metaverse as — it’s an embodied internet so instead of looking at the internet or documents, which is sort of the experience that we have today, it’s an internet that you’re going to be in and be part of.”

The defining characteristic of the metaverse, Zuckerberg says, is going to be “scale and presence” — sensations you’ll only be able to get using VR and AR hardware and experiences.

“Like you’re right there with another person or in another place and that’s very different from every experience of technology that we’ve had before, including this Zoom call. Alright, I can see your faces — that’s nice. And it’s better than nothing, but I don’t think anyone is under any illusion that we don’t feel like we’re in the same place together. There’s something magical about that sense of presence and I think being able to deliver that is the ultimate dream of building social experiences.”

With Oculus VR, Facebook keeps inching closer towards the metaverse vision. Last year, the Quest 2 VR headset launched at a more accessible $299 price point and gained features like hand tracking and a multi-screen browser. This year, Facebook launched Horizon Workrooms for people to collaborate together using virtual whiteboards and passthrough keyboards for remote desktops. It also doubled the Quest 2’s 64GB storage to 128GB for the same price to give users more space to install apps. The hardware is getting better and cheaper, and the software more feature-rich. If the metaverse comes together the way Zuckerberg thinks it will, Facebook is going have a massive head start providing the pipeline for it function.

At Connect 2021, Facebook is making good on last year’s announcement to add more fitness-focused experiences to the Quest platform. For instance, FitXR is getting a fitness studio and Player 22 is adding hand-tracked bodyweight exercises. There will also be a new Active Pack accessories set — controller grips that make the Touch controllers less slippery and a new face plate that’s easier to wipe down. Also for gaming: better multiplayer. Facebook’s making it easier to find friends to play games with and invite them to join you in a game.

In addition to Horizon Worlds and Horizon Workrooms, Venues, an app for attending live concerts and sports events previously exclusive to the now-retired Oculus Go and Gear VR, is being reborn as Horizon Venues for Quest headsets.

Working in VR (and with AR passthrough) is another growth area for Facebook’s metaverse push. Facebook really, really wants to get people working in VR. To move that along, Facebook’s making it so that users with consumer Quest 2 headsets can log into Quest for Business experiences with a Work Account as opposed to their personal Facebook account. Previously, to use Quest for Business, you needed a special enterprise version of the Quest 2 headset that cost more than double and came with an annual device fee after the first year. The old Quest for Business program will be retired later this year as it enters closed beta on consumer Quest 2 headsets later this year; a full launch for businesses is not expected until 2023. This two-year timeline speaks to the long game that Facebook is taking with VR and the metaverse.

Another bid to get more people acclimated to working in VR: third-party app support in Horizon Home. Slack, Dropbox, Facebook, and Instagram will all be available within Horizon Home — in 2D of course — and can be downloaded from the Oculus Store. Facebook says more apps will join, including Monday.com, Pluto TV, and others — there’s a whole PWA SDK for developers to port their apps over. If you’ve ever hopped into VR and said “I wish I could be bombarded with a million Slack messages” now you can. (You’re a sicko, but sure thing.)

More customization within VR apps is also on the way. For example, in Horizon Workrooms, companies will be able to customize the walls of the virtual rooms with “a custom logo and posters (motivational or otherwise),” according to Facebook. I’m not sure that’s good enough incentive to get more people donning Quest headsets, but I suppose every little thing to make VR rooms feel more like real ones — even if the metaverse resembles a video game — is a step towards squashing any stigma.

Most of the work to transform the Quest 2 into more robust metaverse hardware is happening behind the scenes and via small updates. More and better tools like an “Interaction SDK" that will let developers add more advanced hand tracking and voice input.

“Developers can incorporate voice in a way where they can use it for new forms of gameplay or for better navigation,” said Facebook Reality Labs product manager Prabhu Parthasarathy. “For example, you could jump into FitXR and say ‘Show me my boxing workouts’ and quickly jump into your workout.”

Other small stuff that adds up over time includes improved virtual object placement in the real world and spatial anchors (your headset remembers where you’ve placed virtual objects and borders in an environment so it’s easier to jump back into). This is all part of adding more presence to the Quest platform.

Facebook is also adding Messenger audio calls to Quest, which joins text-based Messenger support from earlier this year. There’s Cloud Back, which is a way to store game save data and settings in the cloud for restoring on a new or reset VR headset. Avatars 2.0 SDK is bringing more personalization options.

“We’re constantly getting more natural ways to connect and communicate with each other. Through Facebook’s lifetime, we started off typing text into websites. Then we got phones with cameras so the internet became more visual and mobile. Then as connections got better, now rich video, which is more immersive and the main way we share experiences. That’s just gonna continue. I think we’ll keep on getting more immersive ways to connecting.”

The metaverse that Facebook is betting on as the next computing platform is not going to be built overnight. It’s a slow and continuous rollout of software updates alongside improvements to hardware. The hope is that the two will converge at the right moment and that’s when the whole metaverse will have arrived. It’s kind of like smartphones — they only exploded after the iPhone arrived. But 3G and the app ecosystem were vital to the modern smartphone’s meteoric success.

“One of the lessons that we’ve learned over the last five years or so is around trying to take into account some of the principles around what we want to build up front, and be clear about where we’re going,” Zuckerberg said. “Building something that is not just a great product for consumers, but can build a great creative economy for creators and developers to participate and be part of is the upside of what gets created.”

Facebook made two really smart bets buying Instagram and WhatsApp — entire communities and businesses depend on the platforms to communicate and operate. Will VR and Oculus bring the same return? Facebook’s tech wing, Reality Labs, is forging ahead to make it happen. There’s always a fallback plan if VR/AR doesn’t pan out.

The big question is if anyone will follow Zuckerberg into the metaverse.

“I think it’s important that [the metaverse] be continuous across different devices,” Zuckerberg said. “So we’ll talk a bit about AR glasses. We’ll talk about VR devices for having the most immersive experiences. But of course it’s going to be really important that you can jump into the metaverse through phones and computers, including the social media apps we’ve already built where people are connecting all day already.”

This all sounds extremely ambitious. The big question is if anyone will follow Zuckerberg into the metaverse. Do we even want to socialize, play, and work in a metaverse?