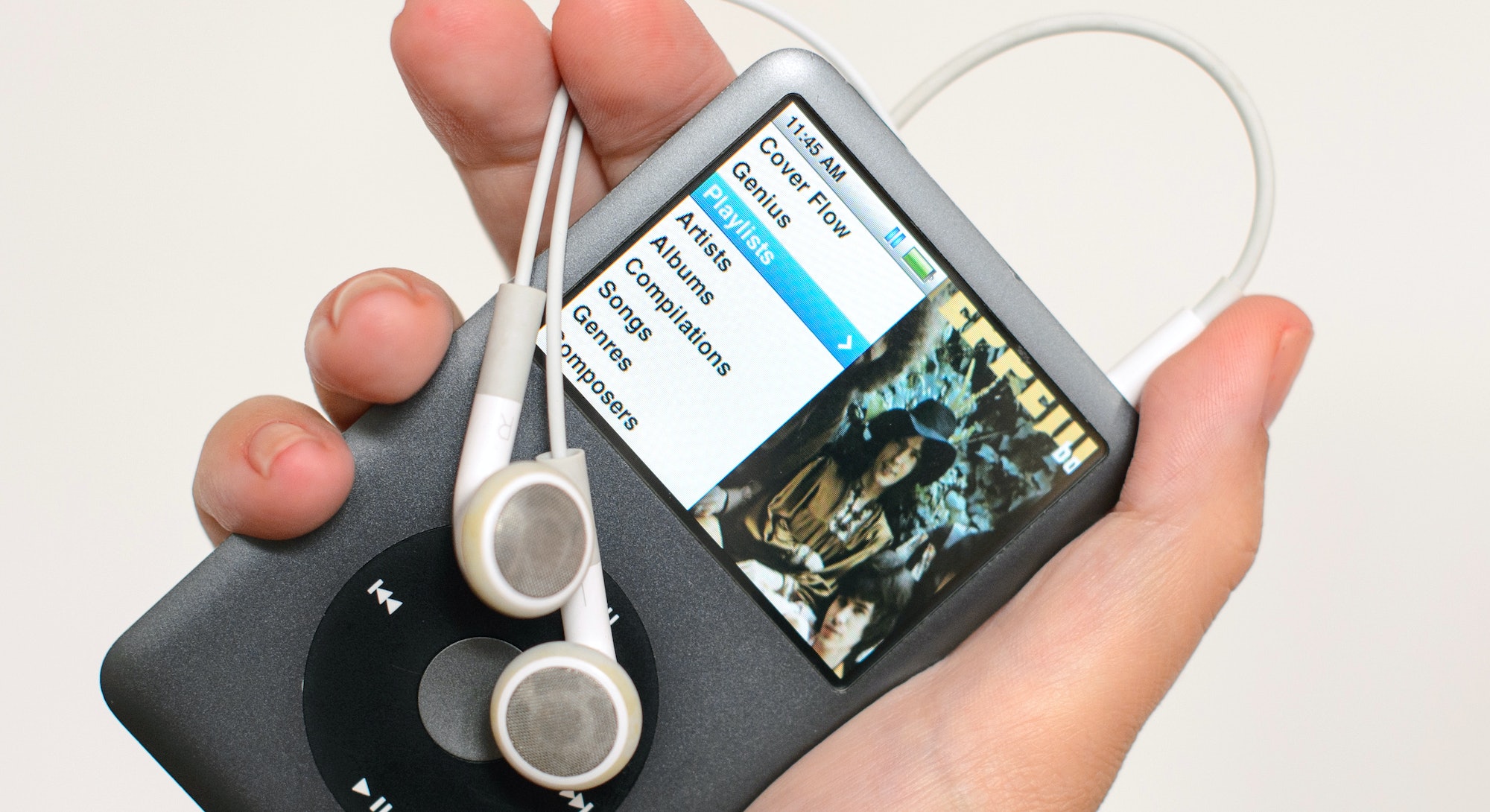 When it comes to consuming media, and particularly music, the biggest driver of change is often storage technology.

Being able to store larger, higher quality files; store more of them; store them in any order you choose; and consume them completely privately, changes everything about how we interact with media. Do not underestimate the power of a big hard drive.

We think of the iPod as one of the shapers of our modern mobile world, but it’s really just classic Apple: a late-stage perfection of a form that had been in development many years prior. The first truly portable music player was Sony’s Walkman, later to be followed by the Discman for playing CDs, and after the advent of the MP3 file, a whole host of competing companies’ flash memory-based music players like the Creative Labs Nomad and the SanDisk Sansa. The iPod was designed to outperform them all by using a hard drive to avoid the storage compromises of early flash memory — and some of Apple’s infamous design sensibility.

Apple’s first iPod came out in 2001 with two major differentiators:

From there, Apple rapidly iterated on its early success with the iPod mini, iPod nano, iPod shuffle, the iPhone, and iPod touch. Each offered different storage sizes (first in super tiny slow RPM hard drives and then later in speedier flash storage), designs, colors, and prices. The iPhone was many people’s first Apple product.

The iPod became as much a status symbol as it did a constant companion. The ads, like the classic series of dancing silhouettes with white earbuds in their ears, were as famous as the device they were advertising. The iPod effectively laid the groundwork for Apple’s cultural dominance and the world-altering success of the iPhone.

Apple discontinued the last surviving member of the iPod line, the 7th-generation iPod touch, on May 10, 2022, over 20 years after it introduced the first. You can credit the end of the iPod to many things, but even though the music player is officially "vintage," its cultural impact was so significant that intrepid modders are keeping the form factor alive even after Apple has given it up.

What ended the iPod

The simplest explanation for why the iPod went out of style is that Apple offered a better alternative. When it launched in 2007, the iPhone was pitched as an iPod, phone, and “internet communicator” all in one. The iPhone's multitouch-based, highly visual interface was a major step up from the click wheel the iPod was famous for, or the physical keyboard and trackball that made everyone want a BlackBerry.

“I fell out of the iPod scene really with the iPhone or other modern-type smartphones,” Colin Wirth, retro tech expert and the creator of This Does Not Compute, tells Inverse. “I was a BlackBerry user for a long time and some days I still miss it, but I finally bought an iPhone and it worked just as well as a music player as it did all those other things.”

Wirth’s experience is not uncommon, especially for the generation who listened to music before the advent of the iPod. The hard drive, music management, and battery life of Apple’s MP3 player at launch was a “more elegant solution,” according to Wirth. In 2007, iPods made up 48 percent of just one-quarter of the company’s revenue. But that didn’t mean it couldn’t be replaced.

Apple continued to sell iPods alongside the iPhone for several years, iterating on popular models like the nano, making the shuffle even smaller, and eventually launching the iPod touch as a cellular-free iPhone in-between device that connected the old line and the new one.

“A lot of people thought of [the iPod touch] in that kind of same stepping-stone way, but not necessarily just for kids, for adults too, where it would be a great option if you wanted to get into the app ecosystem and see what a smartphone was like,” Wirth says.

The iPod touch let you straddle two worlds — or at least get onboarded to Apple’s — but even it eventually succumbed to the all-consuming logic of the smartphone and apps. The iPod’s share of Apple’s quarterly revenue dropped from 48 percent to 14.21 percent only a year later in 2008.

A more powerful, do-it-all device is just as much to blame for the slow decline of the iPod as it is for changes to the music business. The concept of the streaming service dramatically shifted our relationship with music from “owning” a library of digital files (though whether or not you truly own something purchased from a digital shop is more of a matter of perspective) to paying rent for a service that gives you access to a nearly unlimited library of tracks.

Spotify popularized the concept when it came to the U.S. in 2011, but the first service to offer a streaming music library for a flat monthly fee was actually Rhapsody. Others would launch before Spotify (Rdio and Deezer fans, you’re not forgotten), but few could capture the interest of normal people with recommendations, curation, and algorithmic suggestions like Spotify. As soon as these subscription services became available in a simple app for your phone, the idea of a dedicated MP3 player was over for most people.

“I just consume [music] so much that the impact of streaming was so great on my life.”

Guy Dupont, software developer and creator of the “Spotify iPod,” was one of them.

“As much as I love dedicated hardware and I’m excited to talk about dedicated hardware… I just consume [music] so much that the impact of streaming was so great on my life, that it didn't make sense to keep carrying an iPod,” Dupont tells Inverse.

Spotify and streaming services like it generally offer a worse deal for artists. Still, the convenience of music streaming was too great, and the personalization, however invasive, too viral. Spotify Wrapped is the clearest example, repackaging information we pay to give to Spotify that only serves to boost the service’s profile.

“You can tell Spotify knows, now they're starting to build up to it,” Dupont says. “It's a little different because that's stuff you have already discovered. But there's still something about it that feels like it's coming from an external source, even though [Wrapped] is literally your data.”

In that light, Dupont’s iPod project is an interesting fusion of the old and the new, keeping the surface-level aesthetic choices of the iPod but connecting to a service that is much more alive than anything like the old version of the iTunes Store. It’s also totally dependent on the goodwill of Spotify to continue existing. Dupont says the loophole the Spotify iPod uses could be shut down at any time, much like how music can disappear from Spotify without a moment's notice. Using a streaming service comes with compromises that make everything more ephemeral.

How the iPod lives forever

Apple still supports the iPod in the latest macOS Ventura, but the hardware is another story. For an iPod to work “like new” in 2022, it’s likely either been refurbished or modded. This is the main way generations of people born after the iPhone and music streaming are discovering the device for the first time.

The iPod, especially older iPods before the iPod touch, is straightforward to crack open and change.

“The hard drive definitely takes up the most space, probably followed by the battery, “ Dupont says. “Then there’s the kind of main board, which is just all of the electronics except for the click wheel is its own piece of circuitry that connects to the main board, with the little connector.”

Changing any of those components, including the actual display, mostly involves swapping them out, unplugging and plugging back in new cables (with some soldering in some cases), and snapping everything back together.

“The most important thing is it's been done and documented a million times. And people have manufactured parts to make it easy.” Dupont says.

Custom operating systems can fill in when Apple’s iPod software doesn’t play nice with new parts. Rockbox is a popular option, maintained by a community of developers, with dozens of different theme options and plugins that can add additional functionality — like new games (Doom included) or whole iOS-esque apps.

The great irony of the iPod line's tremendous success is that even though Apple abandoned the product category entirely, these things have been around so long that there will always be more alternative parts or software solutions to fill in the gaps. iPods are “kind of future-proof,” Wirth believes. “From now until eternity, you will always be able to put music on an iPod one way or another.”

More involved projects like Dupont’s require new software or hardware, but the basics are accessible for anyone to do on their own. And that’s not even counting the variety of third-party modders on platforms like Etsy that can add new functionality for a reasonable price. You can get an iPod in any color of the rainbow that charges over USB-C with little effort.

“From now until eternity, you will always be able to put music on an iPod one way or another.”

These vendors are meeting a demand that’s arguably caused by some of the changes that spelled the end for the iPod in the first place. Streaming services, despite promises of higher quality audio tiers like Spotify Hi-Fi, don’t do much for the audiophiles among us. Wirth notes there’s a certain “ceremony” to listening to vinyl records that neither iPods nor streaming services capture, but at least the iPod makes listening deliberate (and can sound better over wired headphones). Similarly, smartphones introduce distractions to the listening experience that were never an issue on a dedicated listening device.

Convenience, discoverability, and personalization ultimately won out. People prefer listening to a streaming service on a flexible device like a smartphone to the limitations of an iPod. But that hasn’t stopped people from using them. Whether nostalgia or the yearning for a different relationship to music, iPods live on through new screens, batteries, ports, and operating systems. Little Ships of Theseus carrying flash memory full of audio, just waiting for the next person to get tired of Apple Music or Spotify.