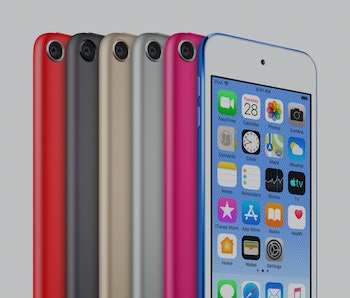 Apple announced it’s discontinuing the iPod touch on Tuesday, ending the company’s 20-year history of dedicated music players with a bit of a whimper.

Mini-iPhone — Apple’s current version of the iPod touch was first introduced in 2019, with an A10 Fusion chip and 256GB of storage. Apple says it will be available while supplies last “through apple.com, Apple Store locations, and Apple Authorized Resellers.”

Following the introduction of the iPhone in 2007, Apple’s iPod touch has essentially existed as a miniature iPhone, acting as a music players and plenty of kids’ first exposure to Apple’s App Store and Messages app — two of the main ways the company likes to keep customers “in the family,” so to speak.

Hard drive — Before the iBeer app was even a twinkle in anyone’s eye, the iPod revolutionized the music industry by basically being a hard drive that connected to iTunes, with easy-to-use software, a click wheel, and a Firewire port.

Apple would refine the idea through various versions of the iPod nano, which made the company’s music player even smaller and more colorful, and even forgo the screen entirely with the iPod shuffle to slightly more mixed success. But basically, the iPod was Apple’s iPhone before the iPhone existed. And now it’s gone.

Services — Apple’s services business is the real reason a device like an iPod isn’t as necessary anymore. Apple Music is available on all of the hardware Apple sells that makes sense to have it, and the company still has a successful audio product in the form of AirPods.

While there’s plenty of people who’d appreciate a dedicated music player from Apple, the company just isn’t interested in it. We’ll always have high school, iPod.