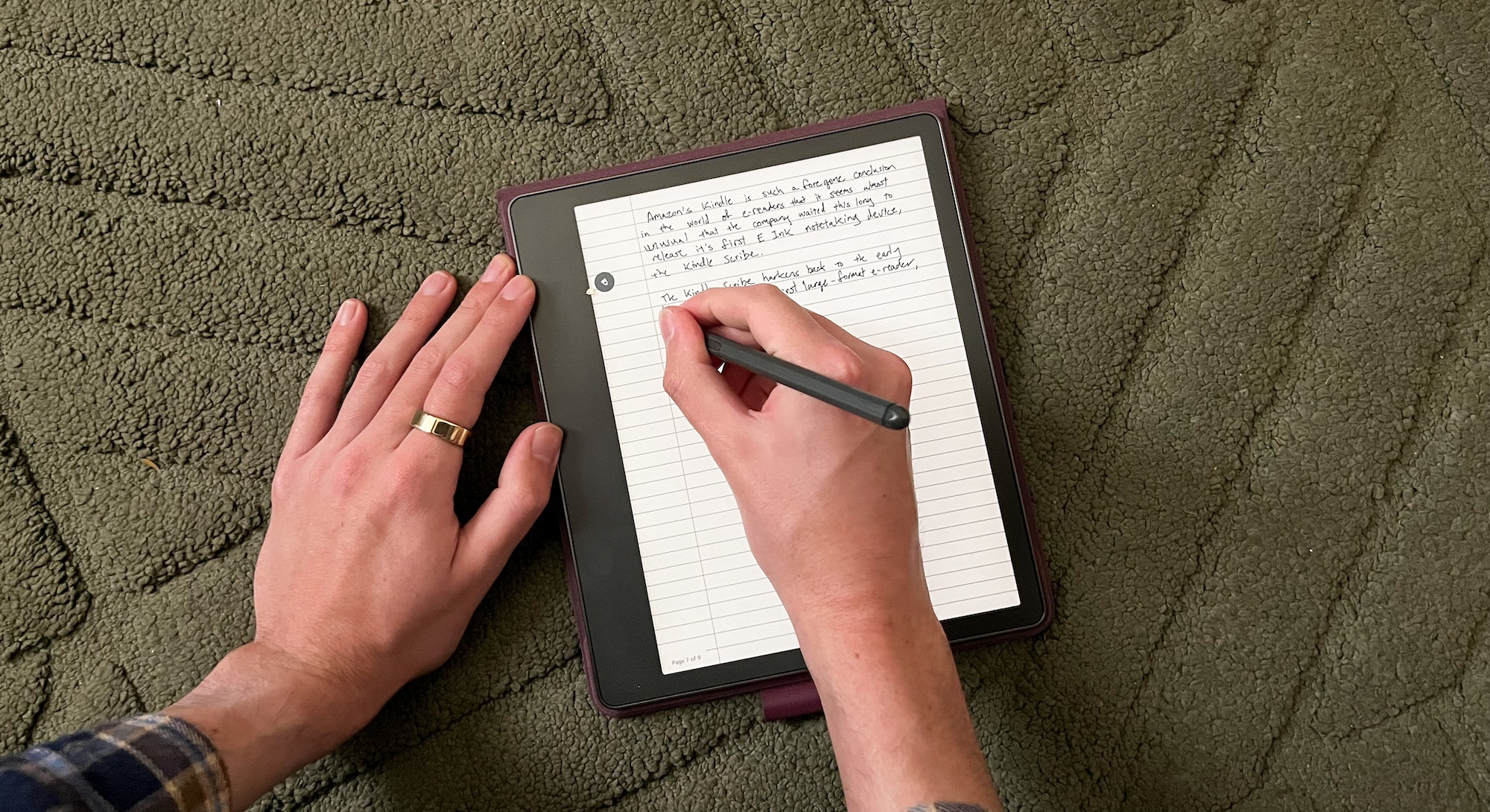 Amazon’s Kindle line is such a foregone conclusion in the world of e-readers that it seems almost unusual that the company waited this long to release its first E Ink notetaking device, the Kindle Scribe.

The Kindle Scribe harkens back to the early days of Amazon’s first large-format e-reader, the Kindle DX, with the hardware taste for metal and asymmetrical bezels of the Kindle Oasis. As a late arrival to the E Ink notetaking tablet party, there’s some expectation that Amazon will deliver the most polished version of a notetaking/e-reader combo available. An answer to the Kobo Elipsas, reMarkable 2s, and Onyx Boox Nova Airs of the world. The reality is, as it often is, more complicated.

The Kindle Scribe starts at $340, but its value will depend a lot on what level of functionality you’re looking for from your notetaking device and how invested you are in Amazon’s ecosystem. Amazon’s treatment of writing is different from its competitors, and not necessarily in a way avid notetakers will appreciate.

An e-reader with note-taking abilities (thanks to an included stylus) with access to Amazon's giant bookstore.

A big screen for scribbling

The Kindle Scribe is mostly screen, with even bezels on all sides except the left, which is wider and acts as a place to hold the device without touching the E Ink. The left side of the Kindle Scribe is also where you’ll find the e-reader's sole USB-C port and its only button, which locks and unlocks the screen and turns the device on and off.

The 10.2-inch, 300 PPI display on the Kindle Scribe is the star, and rightfully so. It’s hard to argue with Amazon’s choice of E Ink screen, and you’re getting all of the company’s nicest features with it: automatic brightness adjustments, screen warmth settings, and now a Wacom layer that supports stylus input. The Kindle Scribe itself is light, and a little bit slippery with its metal back (there are four rubber “feet” on the backside to keep it from sliding around on flat surfaces), but is otherwise a pleasure to hold. (Also of note: the Kindle Scribe is the only Amazon e-reader without an obnoxiously large "Amazon" or "Kindle" logo printed on the rear, instead using the much more tasteful “smile” logo the company prints on shipping boxes.)

Amazon offers several options to customize the Kindle Scribe when you purchase it, breaking down price points based on storage (16GB, 32GB, or 64GB) or which stylus you want. The Basic Pen is just a stylus. The Premium Pen is a bit more interesting, with an eraser on the back, and a shortcut button that can activate a few different options when held down, like automatically switching to the highlighter, throwing down a sticky note in a book, or switching to the eraser. When you’re not using the pen (whether it’s Premium or Basic), it can magnetically attach to the right side of the Kindle Scribe with a satisfying snap.

Not a fully-featured digital notebook

If you’ve used one Kindle you’ve used them all. The variations in the Kindle Scribe’s software are minimal. The e-reader still defaults to a home screen that includes your recently opened books, comics, audiobooks, and now notes, along with recommendations of other Kindle content you might find interesting and several carousels of books you probably won’t want to touch at all. Next to that, you’ll find your library, which houses all of the books you currently own; then your notebooks, which are devoted to the folders and notes you’ve made on the Kindle Scribe; and finally, “More,” which includes forgotten e-reading features like the web browser and Goodreads.

The biggest criticism I can levy at the Kindle Scribe is how underbaked the actual writing software is.

The biggest criticism I can levy at the Kindle Scribe is how underbaked the actual writing software is. Amazon lets you create notebooks (and includes templates that mimic notebook paper, planners, etc.) or folders for notebooks, and that’s basically it in terms of organization. Unlike the reMarkable 2, there are no tags for sorting the notes you create, optical character recognition (OCR) for converting your handwritten notes to text, or a system for directly accessing files on cloud storage services like Dropbox or Google Drive. For now, file transfers are limited to what you can upload to your Kindle Scribe over a wired connection, share through the Kindle app, or send to your Kindle’s email and wait for Amazon to populate on your device. At some point in 2023, Amazon and Microsoft claim there will be a way to send documents directly from Microsoft Word, but it’s unclear when that will be available.

One welcome change Amazon has made to its software suite is making the notes you take on the Kindle Scribe available in the Kindle app for iOS or Android. It’s a nice bit of convenience that I wish was reflected in the rest of the e-reader at launch.

The “pen on paper” experience

It’s a shame those power user features are missing because Amazon gets almost all of the other basics right. The Premium Pen included in my review unit was comfortable to hold and write with, and the satisfying scratch from the slightly textured screen on the Kindle Scribe produced a pleasant sound and friction that was reminiscent of writing on real paper.

For keen-eyed writers, there is a slight, just barely perceptible delay when writing on the Kindle Scribe’s screen in comparison to writing on the reMarkable 2, which could be due to the backlight layer on the e-reader that’s completely missing from the reMarkable 2. It wasn’t enough to ever bother me while writing, and if you’ve never used a reMarkable, you likely won’t notice it all, but I have to do my due diligence and note it. It’s honestly a fair tradeoff for having a nicely lit display that can be used in the dark.

The major downside of writing on the Kindle Scribe is that the selection of digital pen styles is severely limited. Amazon has one pen with a variety of thicknesses, a highlighter that highlights in several different shades, and an eraser. It’s a far cry from the multiple brush choices on competing devices. Combined with no copy-and-paste ability whatsoever and the Kindle Scribe is probably too similar to writing on actual pen and paper.

Amazon says that new writing tools and copy and paste will be added in a software update in the coming months, but considering how standard these features are on other E Ink notetaking devices, it does show that the company has different priorities for the Kindle Scribe. It seems a lot more like a test bed for possible new Kindle features than a confident take on what might make people interested in writing on E Ink in the first place, at least to me.

The Kindle Scribe is fine, in some cases, even really good, but it’s not the be-all-end-all for anyone who was looking to combine their notetaking gadget with their e-reader. For the uninitiated, or anyone who’s not going to need complex folder systems to get their handwritten work done, it’s probably the highest quality and most affordable option out there. This feels like the perfect device for a college student who’s looking to mostly buy ebook versions of their textbooks and digitize their entire notetaking operation.

Remember, as much as I tout the reMarkable 2, it requires a monthly subscription and a minimum $378 purchase for a tablet and stylus to work its best. The Kindle Scribe, despite being on the premium end of Amazon’s e-readers lineup, ends up being cheaper and doesn’t charge you separately for a stylus. It is also devoid of ads on the lock screen, though you’ll find suggestions on your home screen that might as well be ads under a different name.

The Kindle Scribe treats writing as more of an add-on than the main reason you’ll turn it on.

It feels like Amazon gets away with doing less because it offers the most books and the lowest cost hardware, but the company does already seem intent on at least bringing its newest device up to par — the Kindle Scribe product page already has a section devoted to the software features that are coming soon. Assuming there’s broader interest in the Kindle Scribe, hopefully, those updates keep coming. Until then, despite the prominence of “scribbling” in its name, the Kindle Scribe treats writing as more of an add-on than the main reason you’ll turn it on.