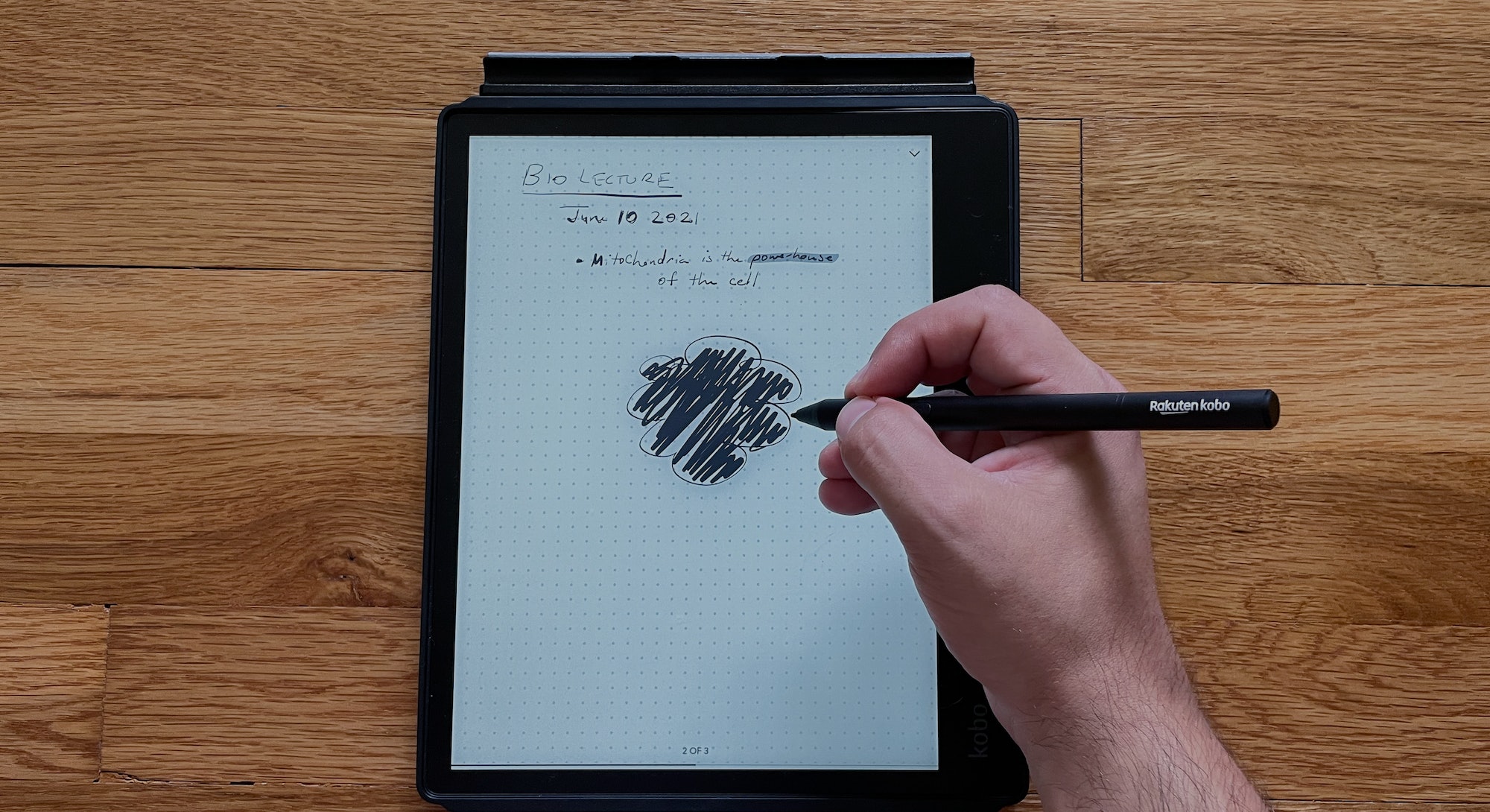 The first thing I noticed upon opening up Kobo’s new Elipsa e-reader is that it’s big. With its 10.3-inch screen, the Elipsa feels more like holding an iPad than a new book. This isn’t a take it to the park for some casual reading e-reader; it’s a sit at your desk and get shit done e-reader.

The Elipsa experience is very much telegraphed by the device’s bulk. Unlike Kobo’s other flagship e-readers, the Elipsa is not for everyone. It’s a definite departure from the company’s modus operandi, which has for years focused on a casual reading experience with some perks (like highlighting). It’s also $399, which makes it Kobo’s most expensive offering.

The Elipsa is a marvelous e-reader and note-taking device.

Kobo’s Elipsa comes bundled as a “pack” with the brand new Kobo Stylus and a larger version of the SleepCover sold with its other e-readers. The Stylus is the real game-changer here. It’s an extremely responsive peripheral that makes note-taking on the Elipsa effortless and — dare I say it — fun. Kobo’s no longer just an e-reader — it’s a do-it-all note-taking device.

In breaking out of its long-standing model — the same one Amazon has used forever with the Kindle — Kobo really separates itself from the pack of same-minded e-reader products available on the market in 2021. Even with a few bugs here and there, the Elipsa is a marvelous e-reader and note-taking device, and one that’s relatively unmatched right now. It sends Kobo’s already-impressive lineup soaring.

The Elipsa is enormous by e-reader standards. With the SleepCover on — the default, given it comes with the device and adds some nice functionality — it’s basically the size of my 13-inch MacBook Air. It’s not exactly pocketable.

The E Ink display on this thing is no joke. The E Ink Carta 1200 touchscreen is ridiculously fast, which makes for a flawless page-turning experience, and with a resolution of 1,404 x 1,872 (and 227 PPI) it’s as sharp as smaller e-readers, despite its size. (I had worried Kobo might’ve sacrificed clarity in its quest for a huge E Ink screen. That worry was unfounded.)

I didn’t expect to love the oversized feel of the Elipsa, but in my testing I never found it to be cumbersome, even when taking it with me for on-the-go reading. Kobo’s experience with crafting devices made specifically for reading goes a long way, here. The Elipsa weighs in at 383 grams (nearly a pound!) but never feels unbalanced. Using it is very much like holding a hardcover, whereas Kobo’s other e-readers are closer to a paperback.

Let’s talk about peripherals. Unlike Kobo’s other e-readers, the Elipsa comes packaged with all its available add-ons: the SleepCover (a long-time Kobo fav) and the brand-new Kobo Stylus. The three products work in tandem so brilliantly that it wouldn’t have made sense to not package them together. The Elipsa’s closest competitor, the reMarkable 2 that Input senior reviews editor Raymond Wong raved about last year, charges $399 for just the tablet — a stylus and case add to the cost.

The Kobo Stylus is the Elipsa’s biggest selling point.

The Kobo Stylus is the Elipsa’s biggest selling point, taking the huge e-reader from basic book device to advanced note-taking heaven. Like the rest of the device, much attention has been paid to the feel of the Stylus. Using it feels much like taking a luxurious fountain pen to a fresh sheet of prime notebook paper; it glides effortlessly across the Elipsa’s huge screen. And you can write anywhere and everywhere. (Okay, not on the menus.)

How does writing on the Elipsa compare to the reMarkable 2’s paper-like experience? I wish I could tell you, but I don’t have a reMarkable 2. Speaking with Ray, though, the writing experience on the Elipsa sure sounds similar. While the Kobo Stylus uses an AAAA battery and the reMarkable, we both agree writing with them on their respective e-readers is very paper-like indeed; there’s no resistance the way you get with styluses on other tablets or touchscreens.

Two buttons toward the tip of the Stylus — where your thumb rests naturally — control its functions. Hold the bottom button to navigate the Elipsa with the Stylus or to highlight text; hold the top button and the Stylus becomes an eraser. It’s ergonomic, with a nearly nonexistent learning curve, and I quickly found myself marking up my PDFs and EPUBs without a second thought.

The SleepCover, which I’ve always loved on my Kobo Libra, serves its purpose well on the Elipsa, too. It folds down from the top of the device, locking the device automatically as it snaps shut, and in doing so it helps secure the Stylus in its magnetic clip at the top of the screen. Like all SleepCovers, it folds up in the back so you can rest the Elipsa on a table while you read. This is particularly helpful when you’re in a note-taking frenzy and don’t want to hold the device while making marginalia.

For the vast majority of my time on the Elipsa, I found Kobo’s software to be very serviceable. I am reluctant to call it perfect — there are a few bugs that get in the way of the experience. They are easy enough to work around, but there’s room for improvement, for sure.

But the Elipsa has some tricks up its sleeve. One notable trick is Dropbox integration, something not offered on any other Kobo models. This is a savvy addition on Kobo’s part, because PDFs are one of the most common documents on which to take notes, and Dropbox is an efficient way to sync those PDFs in one common location. The Dropbox integration is smooth and, yes, any notes you take on the Elipsa show up anywhere else you access them in your Dropbox folder, too. I imagine this would’ve been nothing short of a godsend in my academia days.

The Elipsa’s other notable software addition is a Notebooks section, which (you guessed it) creates a blank canvas upon which you can write or draw whatever you’d like. You can draw on graph paper, a bullet journal background, lines, or a blank page, and individual pages can be organized in larger “notebooks.” All can be exported as PDFs right to your Dropbox.

In almost every circumstance, the Elipsa stands up to all the scribbling very well.

In almost every circumstance, the Elipsa stands up to all the scribbling very well. There is one software issue that can make note-taking a little frustrating, though, and it stands as my only major quibble with an otherwise incredible device. Like most modern e-readers, the Elipsa has many display options, including various fonts, font sizes, spacing, and portrait/landscape orientations. The Elipsa has some trouble with note continuity when making switches between these formatting features. If you write notes in the margin of an ebook and later turn the screen, transitioning to landscape mode, your notes will end up all over the place. They do not anchor to the text or page location in any way.

The only workaround seems to be locking in your formatting choices before starting a book — and disabling the auto-rotate feature — before getting started on a book. Otherwise, you run the risk of your scrawls being unmoored from the text entirely. I’m hopeful Kobo can address this issue in a future software release, given that note-taking is really the best reason to buy the Elipsa.

For power users only

It is very easy for me to recommend Kobo’s e-readers to all kinds of people. I’ve had great luck with my Libra H2O and Kobo offers similar devices at slightly lower and higher price points for different kinds of readers. The Elipsa is the first device I’d be hesitant to recommend outright to anyone; not because it’s bad (it’s so good I’m already regretting having to return my review unit) but because it’s for a very particular type of reader.

For the vast majority of people, reading is a hobby, something to be done while sipping morning coffee or lounging by the water. In these cases (which is to say almost all of them), a more casual e-reader like Kobo’s Libra H2O is plenty powerful. Even the company’s lowest-tier device, the Nia, has a great E Ink screen, a backlight, Wi-Fi, a touchscreen, and weeks’ worth of battery. The Nia retails for $99 and offers just about every feature you need for a solid e-reading experience.

The Elipsa, on the other hand, is a beast. I mean this first and foremost in the physical sense; the Elipsa is an imposing device, heavier and larger than some modern laptops. It is also $399 — much more than your average e-reader, and $150 more than Kobo’s prior top-of-the-line device. With that money, you could buy a more standard Kobo and enough books to keep you busy for a full year.

Kobo’s Elipsa is a near-perfect e-reader.

This is not to say the Elipsa isn’t worth $399 — it’s just that the casual reader has no good reason to pay for the luxury afforded by this particular e-reader. A college student or professor, on the other hand (or anyone who writes and reads seriously) will make much more use of the note-taking extravaganza presented by the Elipsa.

Kobo’s Elipsa is a near-perfect e-reader. It’s a genuine step forward for both Kobo and the larger e-reader market, which, in 2021, often tends toward stagnation. It’s just not for everyone.

The Kobo Elipsa is a huge e-reader, but the responsive stylus and sharp display are so worth it.