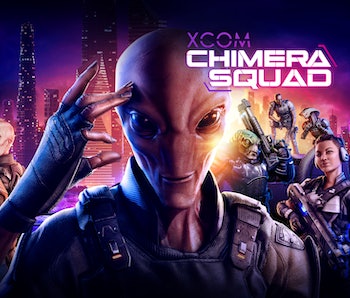 Strategy game fans have more than just Gears Tactics to look forward to this April, because on April 14, 2K and Firaxis dropped a surprise announcement for XCOM: Chimera Squad, a spin-off of its popular sci-fi strategy game franchise that'll be out the same week as the Microsoft game.

While it's similar to XCOM 2 in many ways, Chimera Squad also incorporates new kinds of units and tactics strategies with sci-fi flavor to spice up gameplay. If you're intrigued, this is everything you need to know about XCOM: Chimera Squad.

When is the XCOM: Chimera Squad release date?

XCOM: Chimera Squad is coming much sooner than you might think. 2K confirmed in the initial announcement that the game will launch on April 24, 2020, leaving just a 10-day gap between reveal and release. This launch date seems deliberate when you realize Microsoft will be releasing Gears Tactics just four days later on April 28.

The release of XCOM: Chimera Squad will come over four years after XCOM 2's February 2016 launch and just over a month ahead of XCOM 2's Nintendo Switch release. While Switch players will be experiencing an old XCOM game, PC players will have something new to sink their teeth into.

What platforms will XCOM: Chimera Squad be released on?

When XCOM: Chimera Squad comes out on April 24, it will only be on PC. The game's announcement made no mention of console ports, but Firaxis' last two XCOM games have eventually made it to consoles. The wait between XCOM 2's PC and console versions was about seven months, so it's safe to expect a console release later this year.

What consoles XCOM: Chimera Squad will come to is up in the air, but Google Stadia, Nintendo Switch, PS4, PS5, Xbox One, and Xbox Series X are all potential candidates.

How much will XCOM: Chimera Squad cost?

For any early adopters who buy it before May, then Chimera Squad already looks like a much better value.

What is XCOM: Chimera Squad's story?

XCOM: Chimera Squad follows the events of XCOM 2 but five years later. "Humans, hybrids, and aliens are now working together to forge a civilization of cooperation and co-existence," the game's press release teases. "However, not all of Earth's inhabitants support the interspecies alliance. City 31, a model of peace in a post-invasion world, is opposed by mysterious groups whose agendas threaten to shatter this delicate interspecies alliance."

What new gameplay features does XCOM: Chimera Squad have?

On the surface, it may appear that XCOM: Chimera Squad is similar to XCOM 2, but it makes some very key changes to the XCOM formula. Matches will include a breach phase, a unit-based turn order, unit-specific abilities, and fail states.

At the start of every encounter in XCOM: Chimera Squad, a breach phase will take place. This part of the battle has players strategize where they want to break in and enter a specific building that contains enemies. There are several entry points and enemies to target, so you wind up with a myriad of potential tactical options with this system.

The other major change is the unit-based turn order. XCOM games usually have all players on the player's squad move at once, but that is no longer the case. As such, you'll have to constantly take into account when you will get the opportunity to move, attack, or use a special unit-specific ability. Unit death results in mission failure, so this is something to always keep an eye on while playing.

While the several year gap might make it seem like XCOM: Chimera Squad is essentially XCOM 3, this feels more like a standalone and experimental spin-off than a true XCOM 3. That's also how 2K and Firaxis are trying to bill the game in its reveal press release.

"With XCOM: Chimera Squad, we felt there were exciting gameplay opportunities yet to be discovered within the XCOM universe," Lead Designer Mark Nauta said in the press release.

"[XCOM: Chimera Squad] will revolutionize how the game plays while still retaining the combat experience that makes the XCOM series so loved by gaming communities around the world." While this may not be the true XCOM 3, don't be surprised to see the best elements from this game pulled out and put in the true XCOM 3.