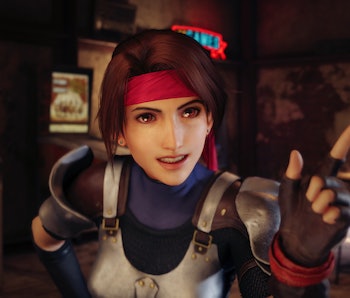 The spring release season for games is now in full swing, with big titles like Animal Crossing: New Horizons and Doom Eternal kicking things off in March. While major 2020 games like The Last of Us Part 2 are still over a month away, April has its fair share of big releases. Cyberpunk 2077 was originally slated for release in April before it was delayed to September, but there are still several heavy hitters coming to PC, PS4, Xbox One, and Nintendo Switch in the next month.

From Final Fantasy to Gears of War, here are our picks for the six most notable games coming out in 2020 (listed by release date).

The first major April release is Resident Evil 3, a flashy remake of a classic PS1 horror game that follows Resident Evil protagonist Jill Valentine as she makes her way through Raccoon City during the T-Virus outbreak. While the game fails to escape the shadow of the outstanding Resident Evil 2 remake that released in January 2019, it's still a very engaging horror game that should please fans of that genre.

Easily the biggest release of April, Final Fantasy VII Remake is the highly anticipated remake of the iconic PS1 Square Enix game that put JRPGs on the map in the West. While it technically only recreates the Midgar portion of the original, Square Enix has ensured players that this chapter featuring Cloud, Tifa, Aerith, Barret, and a little bit of Red-XIII is as densely packed as any mainline Final Fantasy game.

It drops the turn-based gameplay of the original and instead uses a battle system closer to the Kingdom Hearts games, though a separate mode that incorporates turn-based elements can be toggled on. A remake of this scope hasn't really be tackled before in gaming, and it's exciting to think about what Square Enix has in store with the first chapter of this new remake saga.

Predator: Hunting Grounds from Sony and Illfonic is an odd asymmetrical multiplayer game based on the popular horror movie franchise. One player controls the Predator and tries to kill four other players who are soldiers completing an entirely separate mission on the island. While this game is published by Sony, it will also be available on PC via the Epic Games Store.

We think it may be the worst Sony-published game of this generation, but if you like experiences with a "so bad it's good" vibe or are just really into the Predator franchise, this will still be one of April's more notable releases.

You may not be familiar with this Secret of Mana successor, but its western release and remake are really significant for the cult classic JRPG series. This game originally released for the SNES in Japan but never made its way to North America. Now, Trials of Mana has been fully localized and remade from the ground up by Square Enix.

It features six playable characters, each with diverse backstories, and players can only choose to use three during any given playthrough. It's a thrilling plot that sees the chosen heroes finding the fabled Mana Sword to prevent the world's destruction, and has been recreated entirely in 3D. While it's release right in the shadow of Final Fantasy VII Remake, don't pass this game up if you were a fan of Secret of Mana or just like JRPGs.

The most niche title on this list, Sakura Wars has the distinction of being the first game in this very Japanese series to be released in North America in quite some time. Thankfully, it also serves as a soft reboot of the franchise, so it's a great place to hop in. Sakura Wars mixes visual novel and action game elements as players fight demons with mecha in an alt-history 1940s Japan.

While it's competing with Final Fantasy VII Remake and Trials of Mana, check it out if you are a fan of robots, visual novels, or Japanese culture in general. If we want to see more games in the series come west, Sakura Wars will have to do well, so that's another reason to support the Western release.

The Gears series has found tons of success on Xbox as an action-packed, cover-based third-person shooter, but Microsoft is branching out with a new genre and platform exclusivity with Gears Tactics. As the title suggests, Gears Tactics is a strategy game that takes lots of inspiration from XCOM. Because it takes place in the world of Gears and gives characters more fluid movement and action points every turn, it still stands out from similar games of this type.

Even if you are just invested in the games' story, Gears Tactics is an important prequel that shows how the Sera initially dealt with the Locust Horde. It stars the father of Gears 5 protagonist Cait Diaz, so it's clear that Gears Tactics will be an important entry in the overall saga. Whether you are a Gears fan or just an avid player of strategy games, keep Gears Tactics on your radar. The game will be released only on PC for now, but Microsoft has confirmed the game will be making its way to Xbox One soon.

While the remaster of this fan-favorite Call of Duty game received a surprise launch for PS4 today, March 31, the PC and Xbox One versions are still in the pipeline. They will finally arrive on April 30, giving the players the opportunity to experience this classic game with Price, Soap, and the infamous "No Russian" mission.