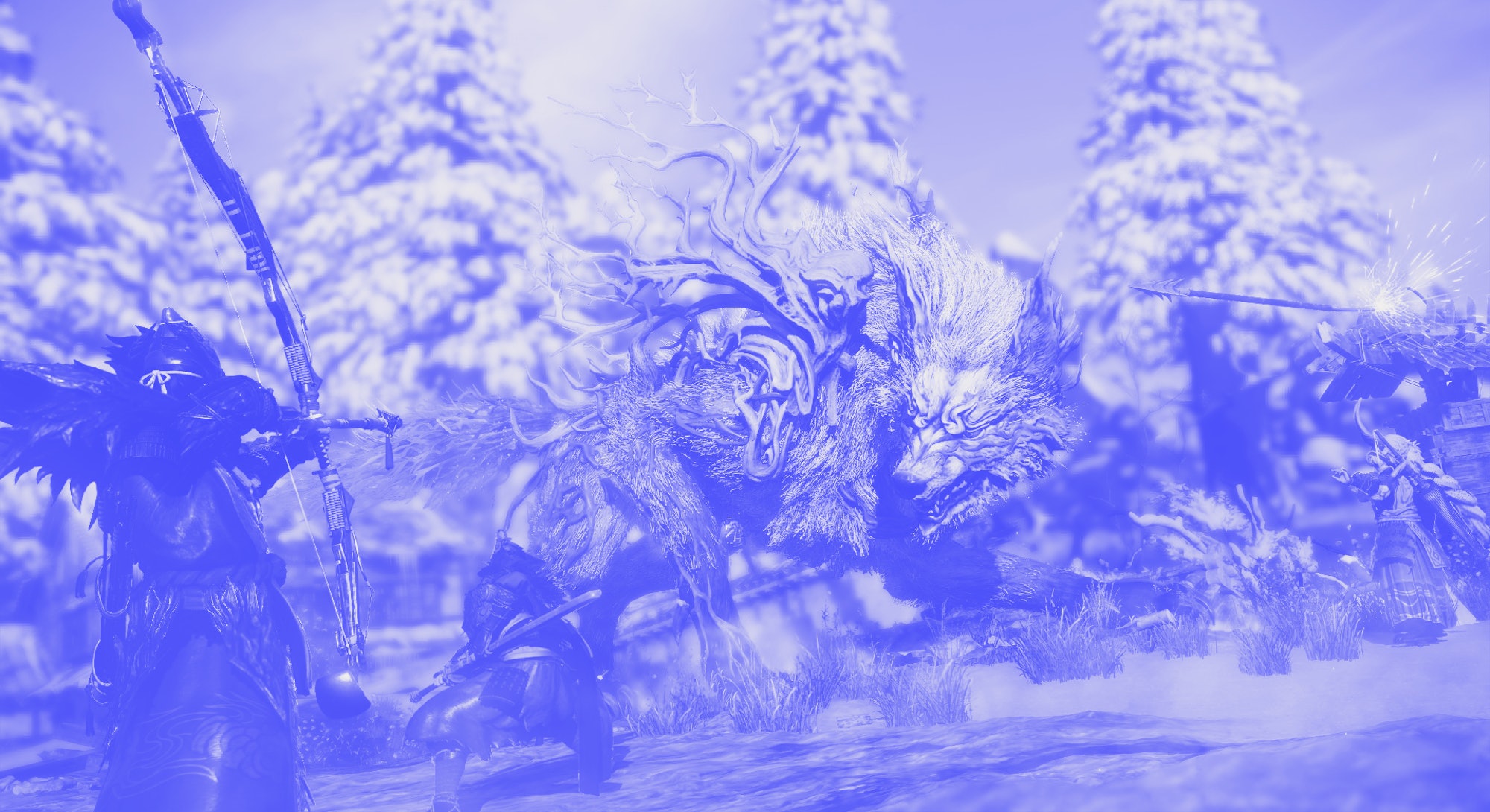 Wild Hearts is an unlikely collaboration between EA and Koei Tecmo that aims to bring a unique crafting-focused twist to the hunting genre.

Over the years hunting games have been widely popularized by the Monster Hunter franchise, especially with Monster Hunter World becoming Capcom’s best-selling game ever. Wild Hearts co-director Kotaro Hirata knows the comparisons to Monster Hunter are “unavoidable,” but it doesn’t worry the team.

Wild Hearts’ key defining feature is a dynamic crafting system called Karakuri, which lets you instantly place a variety of objects on the field to help with battle, resource collecting, traversal, and more. This crafting system gives you a unique way of fighting each of the game’s monsters, which Wild Hearts calls Kemono.

Ahead of the Wile Hearts’ release on February 17, 2023, Inverse had the chance to go into detail on teh Karakuri system with co-directors Kotaro Hirata and Takuto Edagawa.

The Karakuri system seems very experimental. How did the system evolve from when you started development?

Hirata - When we started creating this hunting game, we wanted to incorporate a crafting element, but a lot of things have evolved over time. In the very beginning, we were thinking about a game where you set up traps and other things on the field, to give you an advantage, and then lure the enemy into that area. That was what we were thinking of at the very beginning, but it didn't work out.

So then we set out to create a system where the crafting element adds to the battle against monsters. We want the Karakuri system to give you a synergy in that sense.

Why did you decide to have Karakuri stay persistent across the player’s world, rather than vanish when they go back to camp? How difficult is that to do on a technical level?

Edagawa - It was a difficult adjustment to make from a strategic resources sense. We wanted to give players independence and the field to reflect the uniqueness of each player. When it comes to hunting game, there's a playing cycle. You will often have to play the same stage over again and fight the same monster again. We want there to be a change, a slow but gradual change, so that the players can play the game for a long time.

In the new trailer, two of the things that really stood out to me were that giant wheel and the fans you can use to float. How much variation is there in the Karakuri that you can use to traverse the world. How do you make sure that all of those traversal options can still be utilized in combat as well?

Edagawa - There are plenty of Karakuri used for traversing and collecting the resource items in the field, but I cannot disclose a specific number.

As for the use in the battle, I think you refer to the giant wheels you can use as a bike, but perhaps you could add some additional elements to it like spikes, and then use it in battle. Or you can use a zipline to escape from a battle. We didn't necessarily create the traversal Karakuri for the battle system, but it's really up to you how to play.

With how much variety the Karakuri system has, how did you go about designing Wild Hearts’ monsters? How did you make sure battles feel balanced no matter what Karakuri the player uses?

Hirata - We built the Kemono system in order to expand the player action — they fuse with the environment and change the environment around them. They can break the Karakuri that the players have built. So in the same way, players can change the battlefield and the Kemono can do the same too. Kemono can create a battlefield that's favorable to them.

Another thing we focused on is how Kemono can react to the player’s Karakuri in the field. For example, the player can build a wall and get the Boar to run into that wall. And if that happens, the Boar knocks himself out. That’s an interaction between not just the player and the Kemono, but the Karakuri and the Kemono.

How did you decide on the visual design of Karakuri? How did you strike a balance between having it feel like advanced technology but still relevant to the feudal Japan aesthetic?

Edagawa - We didn't want it to be just anything goes. The Karakuri are designed after things in the real world. We wanted them to sort of blend into the environment. You see that in Karakuri like the Yagura (tower) in the field and also the water wheels. This is a world of fiction, however, we wanted this fiction to also have a feeling of reality.

I’d like to hear more about the Karakuri you use to gather resources. How complex is the gathering system, and what inspired you to implement gathering Karakuri in the first place?

Edagawa - The focus of the Karakuri system was for them to be used in battles. We could have done more in terms of resource collection, but we ended up doing things that are very simple. You have to consider the distribution of resources in the Karakuri system, there are only so many that you can build in the field. That’s the kind of balance that we thought about.

With the game so close to launching, are you satisfied personally with where the Karakuri system is right now? Do you have any ideas that you might want to implement post-launch?

Edagawa - We are satisfied with the Karakuri system that's in the game right now, I think it enables satisfactory gameplay. As for post-launch, I cannot say much except to say that there are a lot of Karakuri ideas. It's really infinite — the possibilities are endless.

Are any of these going to be developed post-launch? I cannot say. However, the Karakuri system is a very flexible one that allows a host of new Karakuri to be introduced. So what I mean to say is there are a lot of things that we want to do. But, as it is, we believe the game is already sufficient enough and offers a very enjoyable experience.