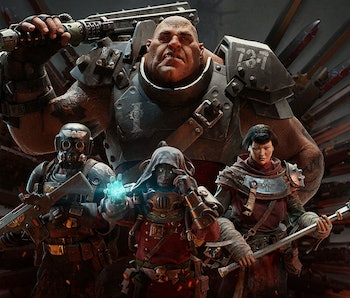 Over the years multiplayer games have experimented with different ways to integrate storytelling, from the pre-game cutscenes of Titanfall to the environmental storytelling of Left 4 Dead. There’s a fascinating new idea brought to the table by Warhammer 40,000: Darktide, however, putting a deep character role-playing system in the midst of all the shooting and action. By role-playing, I mean the idea of creating your own unique character that puts you in the experience. This focus combined with rock-solid combat mechanics prime Darktide to potentially become a new multiplayer sensation, even if there’s quite a bit of polish left to do.

I had the chance to jump into Darktide’s recent closed beta, playing through over a dozen missions while getting a feel for the game’s four distinct classes. Darktide’s story focuses on a squad of Inquisitorial Agents sent to investigate a Chaos Infiltration (parasitic entities from a different plane) on the planet of Atoma Prime. You’ll obviously have more of an attachment to Darktide’s story if you’re familiar with the Warhammer universe, but the basic framework is still enough to string new players along.

Darktide is set in the Warhammer 40,000 universe whereas Fatshark’s previous games, Vermintide and Vermintide 2, used the more fantasy-focused Warhammer setting. Darktide is built on the same formula as the Vermintide games, with four players teaming up to make their way through a string of missions with dynamic enemies and obstacles.

What’s really interesting is how your character fits into all of this.

You play one of the members of the Inquisitor Squad, but unlike other Left 4 Dead-style games, there’s a robust character creator. While you can, of course, customize the look and voice of your character, the best piece of the creator is the detailed background you can give them. There’s a series of Mass Effect-style choices that define who your character is and where they come from, including things like planet of origin, the defining moment of their life, and the criminal offense that landed them in the Inquisition.

While these decisions give your character context within the broader story, what feels really innovative is how these small decisions shape the dialogue throughout the rest of the game. While your party is making its way through any given mission, there’s a constant stream of banter, whether it’s something that helps give more context on Darktide’s world and factions or simply your character offering their opinion on something.

There seems to be quite a bit of variation in this system, as multiple characters I created felt markedly different. My Veteran was a grizzled warrior disillusioned by the false promises of those in power, while my Zealot was a religious fanatic obsessed with “purifying” the unholy. These interactions, while interesting, often feel too short and truncated. But it’s precisely the kind of foundation you want in a beta that’s refined into something even more dynamic for the final product.

Of course, equally if not more important are the gameplay mechanics backing up the story framework. Darktide feels every bit as visceral as Vermintide, with even a little more variation.

Each character has a ranged weapon and a melee weapon, and you’ll need to swap between the two in order to handle the variety of challenges thrown your way. Melee weapons are used more often and are great for huge crowds of enemies that swarm you, while guns can let you pivot to party support if you find your health low. On top of this, each character class has a set of passive skills and a specific ability, like the Ogyr’s Bull Rush that lets them surge forward and knock down any enemies in their path.

The core gameplay loop of Darktide is very much the formula established by Left 4 Dead-style games. You take on a variety of missions that see your four-player party traveling through a part of the Hive City of Tertium, with hordes of basic and specialized enemies ambushing you along the way.

Darktide is a brutally difficult game by any standard, and even the “easier” missions throw serious challenges at you, with hundreds of enemies or tough bosses. Out of the nearly 20 missions I played, my party only successfully completed two. While the challenge will obviously appeal to some players, there’s clearly some balancing that needs to be done to help players of varying skill levels.

At the same time, there are a handful of other issues that clearly need to be worked on. The levels all seem to blend together and there’s not enough visual variety, which can also apply to enemies, making it hard to tell apart melee and ranged enemies. Then there’s the hub which feels woefully empty and devoid of features currently, but that could very well be because Fatshark is simply holding things back for the beta.

A more serious issue, however, is the game’s performance. While the beta’s principal value is to provide a “stress test” for game servers, Darktide constantly suffered from slowdown and odd glitches, like my audio entirely cutting out except for when a new objective would pop up. The game also completely crashed on me about a dozen times, forcing me to repeat the lengthy boot-up process yet again.

Granted, this is an early build, so these kinds of problems are typical, but the sheer amount of performance issues is definitely a bit worrisome. And yet, it’s surely something the development team will address in due time.

The Vermintide games have clearly left their mark on multiplayer games, and I have no doubt that Darktide can do the same thing, it’s just a matter of getting there. It’s clear that Darktide is a game that’s very much going to change and grow over time, but the strong foundations that are there give me hope it can turn into something special.