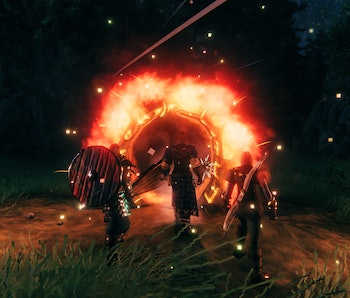 There are a lot of weapons in Valheim. The Viking survival game lets you craft all sorts of tools that are great for chopping down trees and enemies alike. With so many options to choose from, it can be hard to tell what’s worth hunting for and what players can ignore.

To help alleviate the stress of the grind, we’ve combed through Valheim’s arsenal and organized the most notable weapons into a handy tier list.

Instead of running through every single weapon, we’re sticking to some of the bigger, late-game ones. Obviously, a crude bow isn’t very comparable to something like Draugr Fang. Likewise, there are great early game weapons that are easy to craft like the Bronze Sword, which we’re leaving out here. Instead, let’s talk about the weapons that are going to take you much longer to get so you can easily determine what’s worth the hassle.

Here are seven of your best options, broken down into tiers.

In general, spears aren’t the best call in Valheim. Their range is a little underwhelming, and it can be difficult to actually poke enemies with them. It’s a matter of taste, of course, but they’re certainly more difficult to master than swords. For that reason, we’re adding the Fang Spear here. While it’s one of the best spears in the game, piercing damage just isn’t as useful against many late-game enemies. Add in the range issues that the weapon class has in general, and you’ve got a weapon that’s outclassed, even if it’s the best of its kind.

Some Blackmetal weapons tend to be particularly strong, but this knife isn’t really worth the time unless you play all stealth. Its damage is incredibly low, meaning you won’t really do much with it in battle. However, it gets a huge bonus when you sneak up on an enemy to backstab them, so it’s very useful for taking out scattered goblins. Just don’t expect to take down anyone that sees you getting that first kill.

Stagbreaker can be found earlier than a lot of the weapons on this list, but it’s as worthwhile as any late-game weapon. Its big perk is that you can smack it down on the ground to cause a chunk of area-of-effect damage. That makes this perfect for clearing out packs of enemies, though the trade-off is that it’s heavy as heck.

As far as bows go, Draugr Fang is one of the best you can find. The main draw is that it does poison damage. That means that you can fight from afar and widdle enemies down instead of getting up close and personal. The trade-off is that its base damage is somewhat low. It won’t do much of anything against poison-resistant enemies. Despite that, it’s still a must-have for any player.

Every player needs a good sword. The Blackmetal Sword fills exactly that role. While it doesn’t have any sort of fancy perk, it’s just solid all around. It boasts a good balance of damage and speed, so it works in a lot of different situations. As an added bonus, thrust attacks can stun enemies, so you have a little extra utility in battle here.

I’m a simple man. I like to smash things with frost damage. Frostner is a mace that does exactly that and so much more. It inflicts three different damage types, can slow enemies, and has stellar knockback. All of those perks come together to form a must-have weapon that can dish out tons of damage while also serving multiple purposes. It’s just more fun swinging this around than your average sword.

A good mace is simply unmatched. Porcupine is a one-handed weapon with split damage between piercing and bludgeoning. With high power and a relatively fast attack speed, there’s not much Porcupine can’t do. It’ll take down just about any enemy, so you won’t have to overthink resistances too much. Just equip it, start swinging, and raise hell.