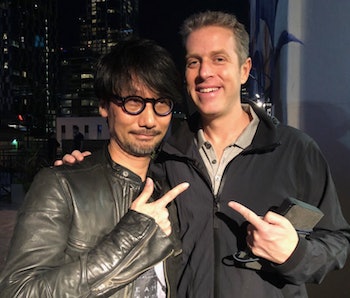 The Tribeca Film Festival is going all-in on games next year. For the first time, festival organizers will allow games to be recognized as Official Selections. Those will be eligible for the inaugural Tribeca Games Award, which will honor works that demonstrate artistic excellence in storytelling. Gaming events at Tribeca 2021 will be overseen by a newly formed advisory board of creatives spanning interactive entertainment and film, including Jon Favreau, Hideo Kojima, Geoff Keighley, and Nia DaCosta. The move comes as a highbrow affirmation of the games industry's artistic and creative talent that would have been difficult to imagine just a few years ago.

As in previous years, Tribeca 2021 will feature game selections and conversations with leading voices in the space, with an emphasis on the medium's distinctive contributions to storytelling, art, and innovation. The 2020 event was taken online due to Covid-19 concerns with gaming events postponed, though jurors doled out the event's usual slate of film awards remotely. One of the marquee events of 2019's gaming slate was headlined by Keighley and Kojima. Joined by actor and Kojima muse Norman Reedus, they discussed the ambitions of 2019's Death Stranding, where players take on the role of a put-upon courier in a dystopian future.

While games have been a part of the venerable cinema event for many years now, the organizers felt the time was ripe to expand the focus on gaming.

“In the ten years since we first welcomed a game to Tribeca’s official program, we’ve seen an exciting convergence of games, film, and immersive experiences. Where there was once a clear delineation between media, there is now a blurring of the lines—stories have become games and games have become stories.” said Tribeca Enterprises and Tribeca Film Festival Co-Founder and CEO Jane Rosenthal in a press release. “Broad recognition for voices at the forefront of this ever-changing landscape is long overdue, and we intend to be a home for these creators whose incredible work should be celebrated.”

In recent years, games have steadily moved from being dismissed as dorm-room diversions to being dissected as high-art masterpieces. Recent releases like Death Stranding, The Last of Us Part II, and Tell Me Why have continued to raise the bar for ambitious, thought-provoking stories told through interactive mediums.

“Tribeca Games is expanding in response to the enthusiasm we have seen from the games community and our audiences. Games have proven to be one of the most sophisticated storytelling vehicles today -- not only with narrative but also with incredible artistic mastery, the creation of highly immersive worlds and providing meaningful connections to communities all over the world,” added Casey Baltes, Vice President of Tribeca Games. “We’re excited to celebrate games and game creators alongside film, immersive, music, art, and more at next year’s Festival.”

Here's a full rundown of the impressive advisory board for Tribeca Games 2021:

More like this
Gaming
5.11.2022 4:00 PM
Skywalker Saga made one of Star Wars' worst characters even more awful
By B.C. Wallin
Gaming
5.6.2022 7:00 PM
Esports’ most notorious CEO is finally facing an overdue reckoning
By Steven Asarch
Gaming
19 hours ago
7 years later, the RPG with the most memorable world still holds up
By Joseph Yaden
Related Tags
Share: