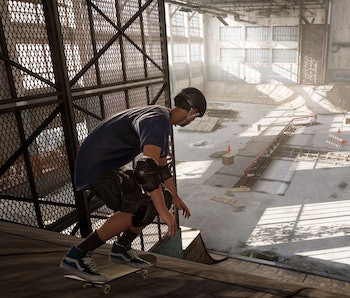 17 years ago was the last time I skated down that familiar warehouse ramp leading into a steel half-pipe. Suspended above was a glass room containing a videotape, an in-game collectible that unlocked dope skate videos like this one. I don't remember the last time I saw my coworkers in person. But I do remember that if you press "up" on the D-pad twice right as you release the X button to ollie, you get just enough of a vertical boost that lets you snag the tape.

That's how I play Tony Hawk's Pro Skater in my memory. But here I am in 2020, finally playing it for real and splatting like a mosquito on a truck windshield. As I spent the next two hours trying to pull off skateboard tricks I was capable of in my childhood, I came to a realization: Nostalgia has never been more cruel, or more fun.

Announced to great fanfare earlier this summer, Tony Hawk's Pro Skater 1 & 2 from developer Vicarious Visions is a combined remaster of the first two acclaimed games (released in 1999 and 2000 respectively) in the best-selling Tony Hawk's Pro Skater series. But more than just a high-def remake, Pro Skater 1 & 2 is built from the ground up, with breathtaking visuals rendered in Unreal Engine and modern mechanical polish. The result is an experience that merges the rock-solid gameplay of 1999 with the stellar aesthetics of 2020 — good news to younger gamers who missed out, great news to nostalgic veterans whose standards have changed since Clinton sat in office.

Tony Hawk's Pro Skater 1 & 2 comes to PC, PS4, and Xbox One September 4. Inverse playtested a PS4 demo limited to one playable skater (the man himself, Tony Hawk) and a re-playable two-minute session in the classic Warehouse level.

To answer the most important question: Yes, Tony Hawk's Pro Skater is still as fun as you remember, now with buttery smoothness in trick execution and a tangible weight to the player. For the first time, you can feel the contentious relationship to the series' only true antagonist — gravity.

This is shaping up to be everything you've hoped. Sure, it looks different than the 1999 version — Hawk is older, and the iconic Warehouse has undergone a cool blue and gray facelift. But it takes only nanoseconds before Pro Skater 1 & 2 activates your dormant muscle memory of grinds, ollies, and lip tricks. The auditory aid in the series' infamous era-defining soundtrack, featuring bands like Goldfinger, Rage Against the Machine, and Powerman 5000 round out the experience.

If only it weren't so difficult.

Beneath its facade as a sports game, Tony Hawk's Pro Skater is a fighting game in disguise. Like fighting games, it requires precise timing and knowledge of intricate combo inputs. It does you no good to mash away at the controller. With Isaac Newton's laws of physics as your ever-present enemy, nothing is more disappointing than racking up an impressive score only to lose it all, plus precious time, because you got ambitious. It's no Dark Souls, but Pro Skater 1 & 2 is a harsh reminder that you are not the "Pro Skater" you imagined yourself to be.

THPS epitomizes the contradictory nostalgia that's everywhere you look in the games industry at present. Gamers want to play old games how they remember them, not how they actually played. Pro Skater 1 & 2 has none of the jagged edges a game in 1999 or 2000 would actually have, and is shaping up to be a very different game than its ancestors. Whereas the originals were slower and forgiving, Pro Skater 1 & 2 is not. There are features, such as feet positioning and trick reverts, that weren't introduced until later in Pro Skater history and are present here in PS1&2. You couldn't skip songs. You can now. (But why would you?)

We'll have to wait until there is full access to Tony Hawk's Pro Skater 1 & 2 before making more informed judgement calls. But for now, take comfort knowing that the same fun you had 20 years ago, long before life threw you for a loop, awaits in what might be a bonafide crowd-pleaser. Just another month and you'll pretend you're Superman.