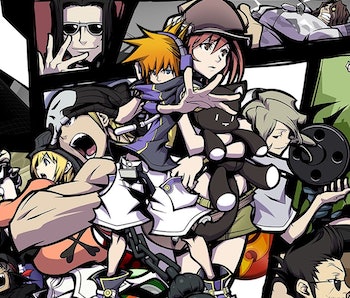 Square Enix is responsible for crafting some of the most popular RPGs of all time, but at the same time, the publisher has put out some of the biggest cult classics. One particular little game on the Nintendo DS deserves to be on the same level as the genre greats, but somehow, still remains an overlooked masterpiece. The World Ends With You is one of the most imaginative games ever released by Square Enix, and its utterly unique style still helps it stand out fifteen years later.

The World Ends With You takes place in the trendy Shibuya, Tokyo, a district well known as a hub of fashion and culture, especially for the youth of Japan. These ideas play directly into TWEWY, as players assume the role of the socially inept Neku Sakuraba, who wakes up one day to find he’s dead and has been chosen to take part in the “Reaper’s Game.” This deadly competition takes place in an alternate plane of existence and forces its competitors to fight for their existence, or risk being erased permanently.

TWEWY’s story plays out over a number of days, and there’s a strong central mystery that keeps the narrative surging forward. Part of what makes TWEWY’s story so strong is the personal growth that each of the main characters goes through. In the midst of these character arcs are a wealth of narrative themes that feel more applicable than ever in 2022.

TWEWY is all about learning to accept other people, and not be afraid to lean on them when you’re struggling. The game uses the setting of Shibuya Scramble as an allegory for all the noise and distractions of the modern age, and how easy it is to lose yourself amidst all that noise. TWEWY stresses how important it is to have empathy, and sometimes open yourself up to vulnerability, to really connect with other people.

This theme of connection ties directly into the game’s systems, like the combat that requires you to control two characters at once. TWEWY’s combat required you to use both the buttons and touch screen of the DS. The action feels hectic at the best of times, but you really need to make both your characters cooperate in order to come out on top. It also has a unique pin system, allowing you to combine psychic attacks that all use different touch inputs.

All of the game’s themes and mechanics are unified by a phenomenal aesthetic that really leans into the unique style of Shibuya’s youth. The anime art style is accentuated by sleek lines and eye-popping visuals that evoke graffiti, street art, and comics. Equally, the eclectic soundtrack creates a one-of-a-kind experience with a mix of rap, hip-hop, rock, and more.

What really makes TWEWY stand out so much all these years later is how different it feels from anything else out there (except its sequel NEO: The World Ends With You.) You don’t get a massive world to explore, but rather a very small contained environment that focuses on the uniqueness of its culture and people. The touch-screen combat has a few small issues with responsiveness, but it’s still incredibly unique and provides a lot of variety.

TWEWY’s more personal and contained story feels miles ahead of its time, especially as more JRPGs over the years have started to hone in on those same ideas, even with titles like Tokyo Mirage Sessions and Fire Emblem: Three Houses. With an experimental aesthetic, it’s amazing to think that 2007 Square Enix would take that big of a chance on a brand new IP. Still, it paid off marvelously and The World Ends With You remains one of the best modern JRPGs you can find.