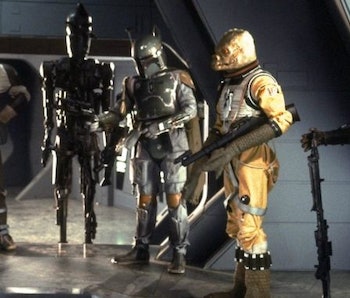 Star Wars is an endless conflict. Bounty Hunters, Rebels, and Imperials are always fighting over who gets to control the galaxy far, far away. Now you can take part in the skirmishing in the new game Star Wars: Hunters. It was first announced at the February 2020 Nintendo Direct as coming to Nintendo Switch, but that's not all we know about the game.

Here's everything we know about Star Wars Hunters.

When is the Star Wars: Hunters release date?

Is there a trailer for Star Wars: Hunters?

Yes! A trailer came with the original Star Wars: Hunters announcement on February 17, 2021. You can watch it below.

Though brief, the trailer gives us a glimpse at a few things. Firstly, we hear the rumble of conflict above, so we can assume that this a location that will be available in the full game. The trailer takes us through the halls of a new location, showing holograms featuring a Wookie, a Red lightsaber-wielding fighter, a heavy Stormtrooper, and a Mandalorian. When the door opens, we can spot a large conflict going on. Most of it is shrouded in dust, but a blue lightsaber pops up, implying a Jedi could be playable.

What characters are in Star Wars: Hunters?

We don't have a character list yet, but it's unlikely that the game will include the playable versions of the characters featured in the holograms. Expect to play as a Wookie, a Red lightsaber-wielding fighter, a heavy Stormtrooper, a Mandalorian, and a Blue lightsaber user.

According to current information, these will be brand new characters rather than renditions of vaunted favorites like Luke Skywalker. Although It's likely still possible for those characters to appear in some capacity down the line. The press release does specify that "Heroes of the Rebellion" will be playable characters. Though that could mean that we get to meet new heroes of the Rebellion that have yet to be featured in media.

What kind of game is Star Wars: Hunters?

Star Wars: Hunters is described as centering on "thrilling, team-based, multiplayer battles featuring a diverse array of distinctive new Star Wars characters" in a press release. Later in the release, it's stated that characters will fight in an arena.

While gameplay has yet to be shown, this is likely a free-to-play game that apes the combat and modes found in Star Wars: Battlefront, while limiting the map size a bit to make the game playable on lower-powered devices. However, this likely won't be connected to Battlefront in any capacity as the game isn't being published by EA.

Star Wars: Hunters takes place after the fall of the Galactic Empire, occupying the space between the original and sequel trilogies. This is the same era covered by The Mandalorian. It's currently unknown how much of this time period the game will cover nor if it will eventually move past it, onto the Sequel trilogy.