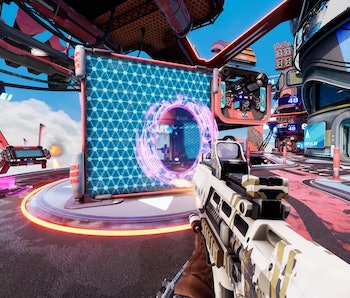 Splitgate has taken the video game industry by storm, offering a creative take on the first-person shooter genre.

The free-to-play shooter is currently in beta across PC, PS4, PS5, Xbox One, and Xbox Series X|S. Splitgate has been described as a mix between Portal and Halo, taking some of the best aspects of both beloved games. You can traverse through portals placed on specific walls around the map, using them to quickly get around — or even as a means to take out your enemies.

One of the game’s trophies/achievements is called “Trickster,” and it requires you to earn a portal kill — and it might not be what you’d expect. In this guide, we’ll show you everything you’ll need to know about earning a portal kill in Splitgate.

What is a portal kill in Splitgate?

You’ll need to get an enemy to fall to their death by entering your portal — a task that is difficult to achieve since it’s reliant on the actions of another player. If you’re someone who utilizes portals often, this achievement/trophy might come easy, but other players will likely struggle since it’s largely luck-based.

What’s the easiest way to get a portal kill?

There’s no sure-fire way to earn a portal kill in Splitgate, but there is a strategy that can increase your odds. We advise playing on either the Highwind or Olympus maps — both of which include walls that are high up above, off the ground.

Keep in mind, you must complete this challenge in a public match as opposed to a custom game. And the other important point is that trophies and achievements pop after a match ends, not during.

Your goal here is to shoot a portal at one of these high walls, preferably one that doesn’t sit close to the ground. The objective is to get an opponent to fall to their death, so you’ll want to avoid placing portals near the ground since there is no fall damage. Once you’ve placed the first portal, you’ll want to make your way to a high traffic area, likely in the center of the map.

From here, you should place a portal nearby, and get the attention of an enemy so they’ll chase you. Don’t shoot them because they must be at full health for the portal kill to count. Then, run through the second portal you just placed, which will lead you to the first one. With a little luck, the enemy will follow you, and fall to their death.

You don’t have to get them to follow you, but from our experience, enemies typically won’t enter a portal unless they’ve placed it themselves. So, you’re much more likely to have an enemy follow you through one, rather than entering your portal on their own.

Just keep your eyes peeled for the Highwind and Olympus maps as you play, and then focus the entire match on baiting an enemy through your portal — hopefully leading to the coveted Trickster achievement/trophy.

More like this
Gaming
12 hours ago
Dead Space gameplay trailer in 7 chilling images
By Joseph Yaden
Gaming
11 hours ago
Where to find Fecund Blessings in Genshin Impact for Of Ballad and Brews
By Jess Reyes
Gaming
16 hours ago
6 best spooky games to play on Nintendo Switch Online ASAP
By Joseph Yaden
Related Tags
Share: