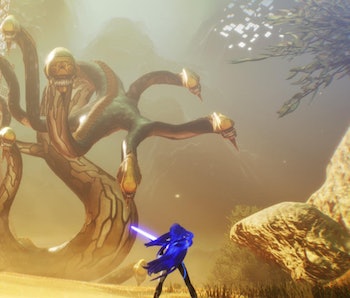 Shin Megami Tensei is a notoriously challenging series. And the latest entry, Shin Megami Tensei V, is no exception. Run-of-the-mill enemy encounters in the game can be unforgiving. Even the first boss, the Hydra, will catch you off guard if you’re not prepared.

Many of Shin Megami Tensei V’s boss battles will require you to plan ahead and come with the proper elements to strike their weaknesses and resist their attacks. And just because Hydra’s the first of many, he’s no walk in the park.

Below, we’ll run down Hydra’s weaknesses and resistances. We’ll also suggest a few essential demons to include in your party, and how to respond to the baddie’s moveset. Let’s dive in.

To start off, Hydra is level 15, so you and your demons should be around that level. (It’s okay if you’re a bit underleveled.)

The two demons I recommend bringing into this fight are Azumi and Tsuchigumo. The former is the humanoid fish-looking creature, and the latter is the giant spider you’ve probably seen trying to chase you around the area. Daemon is also a great option, since it resists Fire and blocks Dark elemental attacks.

Azumi learns the Ice spell, Bufu, which is incredibly useful for hitting Hydra’s weakness. Tsuchigumo is a fantastic tank at this point of the game, able to hit very hard with Bouncing Claw while also taking hits from the boss.

As for all boss battles in this game, make sure to go into the battle with a full Magatsuhi gauge. Using Omagatoki: Critical right out the gate will help you mount an early offensive against Hydra. It’s also a good idea to purchase some Dark Dampeners from Gustave, so you can block the boss’s Magatsuhi attack.

You also may want to go into Apotheosis and Essence Fuse in order to provide Nahobino’s elemental resistance to Fire. The demons Daemon and Onmoraki’s Essences have that property.

When fighting Hydra, normally it’ll either just do a regular attack or it’ll use Fire Breath to hit your entire party (this is where having Nahobino resist Fire is helpful). However, when it gathers Magatsuhi, you know it’s about to do a powerful attack on its next turn. This is a particularly dangerous one. Its Toxic Breath attack hits incredibly hard and also has the chance to inflict Poison on your party.

Depending on your HP and levels, it may be wise to have all your party members Guard after Hydra signals it’s about to unleash Toxic Breath.

At this point in the early game, you’re probably relying on your Pixie demon for healing. The issue is that she’s weak to Dark elemental attacks like Toxic Breath. This is where Darkness Dampeners come in handy. Using one right after Hydra gathers Magatsuhi will completely block out Toxic Breath during the next turn.

After depleting Hydra’s HP down to about 50 percent, its tentacles fall off. It’ll start using Frenzy, which is an incredibly powerful physical attack. This attack will likely KO some of your frailer demons like Pixie, but Tsuchigumo should be resilient enough to survive a few of these.

The offensive game plan is to use Bufu as much as possible to earn more turns, and also have Tsuchigumo keep firing off Bouncing Claws until Hydra finally goes down.

Shin Megami Tensei V is out now for Nintendo Switch.