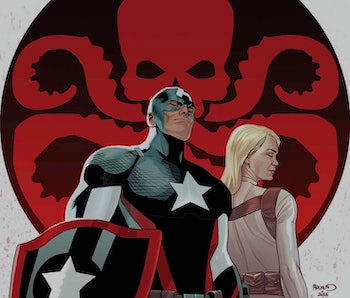 Even though Marvel claims that the evil Captain America who orchestrated a Hydra takeover of the United States in Secret Empire isn’t actually a Nazi, he’s still uncomfortably close to one for many fans. Hydra worked alongside the Nazis in World War II, and in the MCU the group began as a Nazi-offshoot. In Marvel comics, Hydra’s iconography and ethos are so reminiscent of the Nazi party that it has to be intentional, and many fans aren’t buying Marvel’s claim that Hydra and the Nazis are totally not the same thing. However, there is one aspect of Hydra that’s definitely not Nazi-like: their logo.

Hydra’s logo, a skull with ominous octopus tentacles springing from it, illustrates how the villainous organization has wrapped its tentacles deep into the fabric of society and promised that it’ll eventually engulf the whole world. Now, the Nazis and Hydra had a lot in common, but the Third Reich would never use an octopus as a symbol — at least, not to represent themselves.

“It’s not an image that the Nazis would have used for themselves because it had too much of a longtime association with the alleged Jewish conspiracy,” Randall Bytwerk, a professor at Calvin College and the creator of the German Propaganda Archive, tells Inverse.

Bytwerk explains that the Nazis did use the octopus as a visual metaphor, but to represent their enemies: the “bad guys,” from their warped point of view.

“For instance, there’s a 1943 cartoon in a Nazi humor magazine — that’s “humor” in quotation marks — that shows the Jewish octopus reaching out,” Bytwerk says.

The octopus imagery wasn’t just limited to Jews, though. Propaganda artists in Nazi Germany also portrayed the Allies as insidious octopuses, as seen in this 1942 poster which portrays Winston Churchill as an injured, losing cephalopod who is heroically being beaten back as he tries to wrap up the world.

On the other side of the war, Allied artists drew images of Germany and Imperial Japan as tentacled monsters reaching out to suck up the whole world. The octopus is a common propaganda image — there are examples from well before (and after) the Second World War. There aren’t many examples of any organizations or countries embracing this octopus persona, though. Historically, octopuses represent the other, the slimy enemy that’s trying to get you. The Nazis, as evil as they were, didn’t think they were the octopus.

This, perhaps, is the most overtly supervillain thing Hydra does. By slapping an octopus logo over everything Hydra, they’re saying they’re evil. SPECTRE, the evil organization from certain James Bond films, also used an octopus logo.

To identify with the octopus symbol is cartoonish villainy. That said, is still doesn’t feel great to see evil Captain America execute people and destroy cities, even if he has an octopus instead of a swastika on his flag.