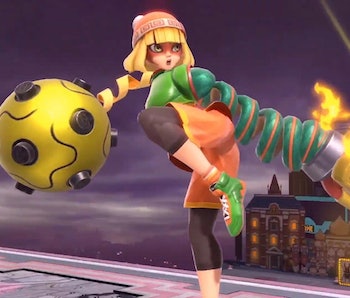 Super Smash Bros. Ultimate’s Fighter Pass 2 will kick off with the addition of Min Min from Nintendo’s ARMS series later this month. Game Director Masahiro Sakurai gave fans a glimpse of what Min Min will be capable of during a showcase on Monday and confirmed that springy-limbed brawler is set for release on June 29. Already, Smash Ultimate pro players are weighing in to gush about the new character's potential.

Smash Ultimate fans won’t have a complete understanding of where Min Min will rank in more legitimate tier lists until after she’s released, but a handful of the game’s veteran players and top competitors have a hunch that the ARMS fighter might be one of the strongest DLC characters released by Nintendo.

Min Min’s unique skillset lets her move and dole out attacks that the rest of the cast simply does not have access to. Her biggest asset is, deliberately her arms. Players can individually control each arm separately by hitting the A Button to move her left and the B button to move her right, equipping different attachments to make different attacks.

This kit might take some getting used to since there’s no other character with this type of mechanic. But once mastered, Min Min could pack quite the punch in both top-level play and online matchmaking. She'll have a high skill threshold, but Min Min will be downright dangerous in the right hands.

ZeRo is considered to be the best Smash 4 player of all-time, and he won a total of 53 tournaments in a row at the peak of his career. He’s retired from the competitive scene but has since become a popular Smash YouTuber with more than 1 million subscribers. On his channel, he highlighted one of Min Min’s most powerful traits.

The ARMS fighter is able to throw out Smash Attacks in midair, an ability that no one else in the cast has access to. Each character has access to four directional Smash Attacks, which are typically fighters’ strongest, chargeable K.O. moves. The catch is that characters must be grounded to pull off a Smash Attack. Otherwise it's just some kind of aerial punch or kick. But not Min Min.

While spamming Smash Attacks might get most fighters slapped up, it appears that Min Min will be able to constantly throw out some of her most powerful moves without the fear of getting punished.

Larry “Larry Lurr” Holland: “She’s going to be able to edge guard opponents without ever leaving the stage.”

Larry Lurr is a veteran Smasher who has played at the top levels since the Smash Bros. Brawl days and has taken sets off the world’s best players, including ZeRo. He believes Min Min’s greatest strength will be her ability to edge-guard and gimp opponents while they’re trying to recover back to the stage.

Many of Smash Ultimate’s top-tier characters — like Pikachu and Joker — excel at intercepting their opponents off-stage to secure an early K.O., and it appears Min Min will be able to do that by standing safely at a distance and timing her long-range attacks just right.

“It seems like she’s going to be able to heavily edge guard opponents without ever needing to leave the stage,” said Larry Lurr in a video he uploaded on Tuesday.

To top it off, Min Min’s long-lasting arm hitboxes could prove to be incredible two-framing tools. Every character in Smash Ultimate is vulnerable for two frames when they are snapping to a stage’s ledge. Players can perfectly time their attacks to punish this small window of weakness — a technique known as a two-frame punish.

This might be very easy for Min Min as she can use both of her arms to constantly keep a hitbox by the ledge.

”Two-framing opponents is going to be easier for her compared to the rest of the cast since she can use both of her arms and put [out] a constant hitbox for a decent amount of time,” said Larry Lurr.

Eric “ESAM” Lew: “I think that frame data is insane given the range of everything.”

ESAM is a top-20 Smash Ultimate player and the world’s best Pikachu main. He was the only Smash Ultimate pro that was patient enough to try and distill Min Min’s frame data based on Sakurai’s showcase on Tuesday.

Characters with good frame data have moves that come out extremely quickly, which can be used to easily punish whiffed attacks or attacks on shields. Based on ESAM’s analysis, Min Min won’t have the best frame data in the game, but her superior range makes it so even moves that should be easy to punish are actually quite difficult to pull off effectively.

“I think that frame data is insane given the range of everything,” he said in a video he published on Tuesday. “Yeah it’s [comparatively] slow [to some of the fastest characters]. So if people run in your face sure it can be a little difficult sometimes, but her hitboxes are still there she can still throw multiple out so it’s not even that big of a deal.”

All things considered, Min Min looks like one of the most interesting additions to the franchise ever.

Min Min will be released in Super Smash Bros. Ultimate on June 29.

More like this
Gaming
7.3.2022 4:00 PM
You need to play Sega's most underrated platformer on Nintendo Switch ASAP
By David Grossman
Gaming
7.1.2022 5:00 PM
15 years later, the smartest shooter ever made still holds up
By Joseph Yaden
Gaming
6.30.2022 5:06 PM
Everything you need to know about the hyped Metroid Prime remaster
By Joseph Yaden
Related Tags
Share: