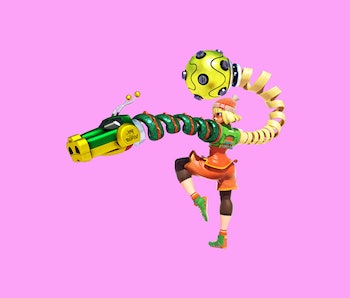 Super Smash Bros. Ultimate Game Director Masahiro Sakurai announced Monday that the ARMS fighter joining the fray would be none other than Min Min. The spring-armed brawler from Nintendo’s quirky boxing game will be the first fighter to be included in Smash Ultimate’s Fighter Pass 2, and she's the sixth DLC character to be added since the game’s release in December 2018.

Min Min will join the Smash Bros. roster on June 29, exactly a week after her initial reveal.

Min Min will be the first playable representative from the ARMS series in Smash Ultimate and will have one of the most unique movesets out of all 76 fighters. She’ll be able to extend her elastic limbs to cover most of the stage in almost any situation, but Min Min comes with one defining feature that truly sets her apart from the rest of the roster.

“There’s one big difference that separates Min Min from the other fighters,” said Sakurai. “The B Button isn’t just a special move like normal ... The A and B Buttons control the left and right arms, respectively.”

The new character can swap between the weapons she has equipped on each arm depending on if she wants to secure a knockout, build up damage, or keep her opponents from getting back on stage. Her kit revolves around fighting enemies on the ground and keeping her distance with her extendo-knuckles.

Here’s a complete breakdown of all of Min Min’s moves we saw during Monday’s Smash Ultimate presentation.

By slightly holding and releasing either the A or B button Min Min will lunge her arms forward. Players can continuously press both buttons to throw out a flurry of long-ranged punches that cover a majority of the stage, but leave Min Min vulnerable if her opponents are able to jump over them and close the distance.

Players can charge up these attacks by holding A or B along and a tilting the joystick to the left or right will unleash more powerful Smash Attacks that extend further and can be angled up or down. Min Min also has the ability to throw out these powerful moves while she’s in the air, something that’s impossible for any other character.

This allows Min Min to punish opponents that want to jump to close the distance between them and her. Use of mix of grounded and aerial Tilt and Smash attacks to keep enemies at ... ARMS length.

Down and Up Specials

Even though Min Min’s kit uses the B Button to control her right arm, she still has access to two special moves.

Holding B and downward on the joystick will let players cycle between three knuckle weapons Min Min can equip on her right arm.

Min Min’s neutral aerial (A Button in midair) changes depending on which of her three weapons she’s wielding. She’ll swing them in a circle around her, Megawatt will be the slowest-but-strongest variant and the Ring Ramram will come out quicker but deal less damage.

Pressing the B Button and Up on the joystick when Min Min is on the ground propels her upwards, holding down this input will send her higher. This can be used to quickly get out of a dicey situation.

When Min Min is in the air, her Up Special becomes a tether grab that will latch her onto the stage, much like Byleth’s Up Special.

Other Aerials and Smash Attacks

Min Min also has access to a handful of kick moves that make up the rest of her kit.

Rapid Jab (Quickly tap the A Button): By repeatedly tapping the A button, Min Min will pepper her opponents with quick kicks.

Up Tilt (A Button + slightly hold up on the joystick): Min Min lets out a quick somersault kick.

Up Aerial (A Button + hold up while in midair): An airborne version of her Up Tilt that can be used to juggle opponents.

Up Smash (A Button + hold up on the joystick): A more powerful version of her Up Tilt that will K.O. opponents off the top. It can also reflect incoming projectiles if timed correctly, like Ness’s Forward Smash.

Down Smash (A Button + hold down): Min Min drops down in a split and kicks her opponents on either side.

Dash Attack (Run and press the A Button): Min Min lunges forward with a jumping kick.

Down Tilt (A Button + slightly hold down): This slides Min Min in the direction players are facing and is a good combo starter.

Down Aerial (A Button + hold down while in midair): Min Min will shoot dowards with a diving kick. This can be used offensively or to quickly get back on stage if you’re at a disadvantage.

Min Min’s Final Smash is called ARMS Rush and it delivers a powerful left hook that obliterates opponents if it connects.

Once the move connects, it will take Min Min’s enemy into a cinematic where they get pummeled by most of the cast of ARMS and Min Min will finish it off with a final laser blast from her Dragon fist weapon.

Min Min will be released on June 29.