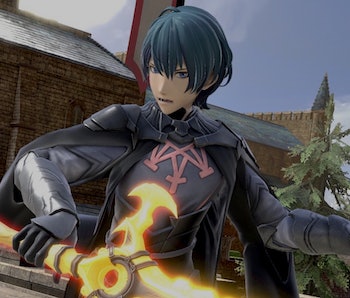 Byleth will be the eighth Fire Emblem character added to the Super Smash Bros. Ultimate roster. The sword-swinging, axe-brandishing protagonist of Three Houses won’t arrive until January 28, but a few of Smash’s best-known personalities have already weighed in on where Byleth ranks on the roster.

Smash Ultimate director Masahiro Sakurai demonstrated most of Byleth’s moveset during the January 16 Nintendo Direct. Viewers got a taste of the DLC fighter’s arsenal of melee weapons and formidable range that will require precise spacing to exploit. Though Byleth's range exceeds that of Marth and Roy, pro Smashers noticed the new character has several weaknesses their counterparts don’t.

Sakurai described Byleth as a sluggish character who compensates with beefy, sweeping attacks that have a lot of wind up time. That might be very powerful if you catch your opponents slipping, but skilled players piloting fast characters like Fox can may easily be able to exploit Byleth’s lack of speed. It seems like the final DLC character of Fighter Pass 1 falls somewhere in the middle of the pros early tier lists. But there’s still some factors we don’t know about yet.

Zero: "Mid-tier or a little bit above average."

Considered the “best Smash 4 player of all time” Gonzalo “ZeRo” Barrios told his 887,000 YouTube subscribers that Byleth’s moveset might not work well together. Many of the Smash Ultimate’s sword characters rely on “hit confirmations,” which means connecting a quick and safe attack that leads into a string of heavy-hitting attacks that would otherwise be risky to throw out.

Byleth’s lack of speed and slow attacks might prevent them from doing the same. Sakurai didn’t show off how well their throws combo into other moves, which could be pivotal to Byleth’s damage output.

"The character looks anywhere between a mid-tier or a little bit above average,” said Barrios in a video. “[The reason being] their lack of mobility, the lag on their moves, and a lot of their move set doesn't seem to flow well. Other than Up Tilt and Down Tilt we didn't have a chance to look at throws so that could change things a bit."

Adam “Armada” Lindgren is considered to be one of the “five gods” of competitive Smash Bros. Melee and regularly posts Smash Bros. Ultimate videos on YouTube. Much like Barrios, he believes Byleth is simply too slow to be a top-ranking character and their moves are too risky to be useful.

"Overall I can't say the character looks too promising,” he said in a video. “Poor mobility [is] obviously a huge drawback. It feels like a lot of the moves are huge gambles, which normally doesn't net you too high in the list. You want to have pretty consistently high stats across the board, in terms of speed, damage output, recovery, edge guard, ledge traps.”

Lindgren said he’d need to see Byleth’s grab game in action before making a final call. It could be that their throws will let players safely pull of otherwise risky attacks.

Leffen: "This character is going to get hard juggled."

One of the top Smash Bros. Melee players, William “Leffen” Hjelte, thinks Byleth will get absolutely torn to shreds, because their aerials take a while to come out, leaving them vulnerable while getting back on stage against a faster character.

"This character is going to get hard juggled,” Hjelte stated in a video. “You have a 22-frame down air, a [neutral air] that seems like a shitty version of Pit's, no aerial mobility, [forward and back] air don't have any verticality whatsoever. Side B is super laggy. The character is going to be shit at getting down."

A lot of pro Smashers were skeptical about Byleth’s potential, but that doesn’t mean they’ll be dead on arrival. Nintendo still needs to reveal the rest of their moveset before players can rank them definitely. But so far it isn’t looking great for Byleth.

Byleth will be released on January 28 as part of the $24.99 Fighter Pack or available for purchase separately for $5.99 in the Nintendo Switch eShop.