“You can't turn off queer people.” 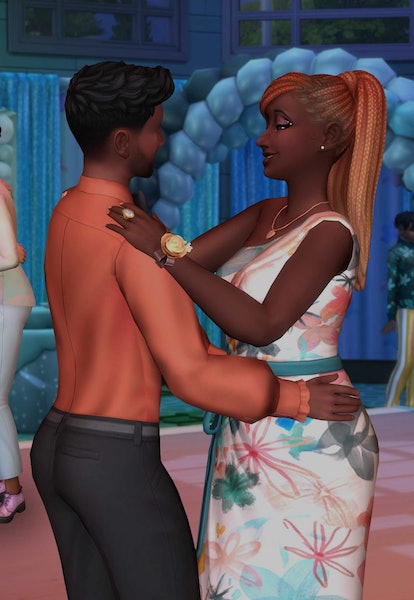 The road to inclusion and diversity in gaming is long.

But The Sims series, developed by Maxis and published by Electronic Arts, has always been a part of it. The original game was released in 2000 and offered players the option to pursue same-sex relationships and the latest entry, The Sims 4, has received consistent updates to expand the representation of the LGBTQIA+ community.

The latest update coming to the game adds the Sexual Orientation feature, which will let players create attraction parameters for sims, including what genders they are interested in romantically and physically. Senior Designer and Design Lead Jessica Croft maintains that diversity in games is a valuable tool in reflecting the diversity of identities in the real world. That’s why Sexual Orientation isn’t just an “optional” feature or added purchase.

“You can’t turn off queer people,” Croft tells Inverse, “That is an important stance for us to take.”

The Sims player base is heavily queer, and Croft has heard countless stories from players who saw themselves represented in media for the first time through The Sims. Numerous members of the development team, including Croft, identify as part of the LGBTQIA+ community.

“It’s in our DNA to really want to be an inclusive franchise and this seemed like an important next step,” Croft says. “This is something players have been asking for for a very long time, and rightly so.”

Media gives people blueprints for how to lead their life, and Maxis sees The Sims as a way to give players more blueprints to see how life could play out.

“It’s in our DNA to really want to be an inclusive franchise.”

But why did this update take so long? Why now? The Sexual Orientation feature will launch on July 28, alongside The Sims 4’s newest expansion, High School Years. As the title suggests, it will focus on stereotypical teenage experiences like going to prom.

“A lot of people discover themselves or start asking who they are in their teenage years,” Croft explains. “When you start talking about finding your identity, touching on orientation was just a no-brainer. So it was important to implement this feature here”.

Players will not be required to purchase the High School Years expansion to receive the Sexual Orientation feature —it will be a free base game update available to everyone.

“We try not to seem evil whenever possible” laughs Croft.

The feature itself sounds simple enough, a new menu will appear in Create a Sim where players can set the parameters of attraction for each Sim. This includes what gender they are interested in romantically and what gender they want to engage in Woohoo with. By separating physical and romantic attraction, the team can better reflect asexual and aromantic identities in the game. However, there is a third option to determine if a Sim is experimenting.

“What really matters is that we felt the work was important.”

“It came from a desire to want to tell authentic stories. We can tell the story of somebody who knows who they are and somebody who’s still figuring it out,” Croft says.

Any of these parameters can be changed at any time, which the team saw as a way to give players the ability to tell evolving stories. Implementing this feature had unforeseen consequences, though.

“80 percent of the work is pretty straightforward then 20 percent is throwing out all the things you broke because the game wasn’t meant to handle this particular thing,” Croft explains.

The Sims 4 is an eight-year-old game, and Croft explains that the game’s systems weren’t made for updates like this. A sore point in the community is the lack of nonbinary gender options for Sims, which means updates like the Sexual Orientation feature still have to operate within a rigid gender binary that doesn’t represent the entire player base.

“Trying to retrofit something in is always complicated, but what really matters is that we felt the work was important,” Croft says. “Still, it felt like the right thing to do.”

Croft notes that while many players will come away from the update feeling they are finally represented by the game, others may not be fully satisfied. She wants to hear from those players in the weeks and months ahead.

“If somebody feels like there’s some aspect of this that doesn’t quite fully capture who you are, let us know,” she says. “If we have further to go, then we should have that conversation.”