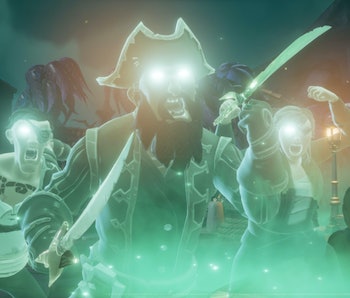 Now that the Sea of Thieves A Pirate’s Life expansion is out, you’re able to fight alongside Pirates of the Caribbean’s Jack Sparrow and other famous characters from the Disney franchise. The update is free for everyone and introduces a slew of quests called Tall Tales, which often feature intricate tasks that can be tricky — especially to newcomers.

One Tall Tale, Captains of the Damned, has a commendation that is a bit challenging to execute properly. The commendation is called Strike Yer Colours and requires you to return fire on Captain Barbossa’s ship. It’s not abundantly clear how to complete it, but we’ve got all the details for checking this one off your list.

Here’s how to complete the Strike Yer Colours commendation.

How to complete the Sea of Thieves Strike Yer Colours commendation

To attempt this commendation, you first need to have unlocked the Captains of the Damned Tall Tale as part of the “A Pirate’s Life” expansion. It’s free, so no need to shell out your precious gold to get your hands on it. You have to complete the first two Tall Tales in order, including A Pirate’s Life and The Sunken Pearl before reaching Captains of the Damned. After you’ve finished both of those Tall Tales, you’ll be able to start the third.

Remember, you start the Tall Tales by speaking with The Castaway at any outpost. Behind this NPC are objects that you can interact with that represent each quest. The one for Captains of the Damned is a skull, which is fitting.

Accept the quest, hop in your ship, head through the nearby green portal, and play through the mission as normal until you reach the lighthouse segment. After you’ve completed the lighthouse puzzle (which is very similar to the one from A Pirate’s Life ), you’ll have to make your way to the nearby beach to defeat a small wave of enemies. Once you do, you’ll need to jump back in your ship to sail to the next objective indicated by a green light.

Here’s when you can attempt the Strike Yer Colours commendation for returning fire on a ship. Dock your ship at this objective where a battle is playing out, and make your way up the nearby steps that lead to the second floor of the ruins.

Climb to the top of the ruins and you’ll come across a line of green ghosts firing cannons at the ships ahead. Collect a cannonball from the nearby barrel, load it into the cannon and fire it at the ship that’s off in the distance. A single shot will do, and as soon as it hits the ship, you’ll earn credit for completing the commendation. If for some reason it doesn’t unlock, try hitting a different ship.

You have to use a cannon to complete this commendation, as opposed to a shot from your gun, so keep that in mind. This isn’t an overly difficult objective, it’s just tough getting through the Tall Tales to reach this point, as many of them are ambiguous and in some cases, buggy.