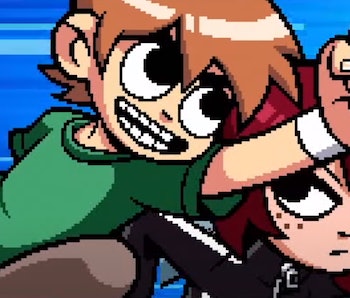 A playful bit of trolling from yours truly has resulted in some very, very good news for fans of the 2010 video game Scott Pilgrim vs. The World: The Game. Edgar Wright, director of the acclaimed cult movie (based on Bryan Lee O'Malley's comic book series for Oni Press), says they're "working on" re-releasing the game.

What Happened? — On Thursday, which marks the 10th anniversary of the cult teen rom-com/action movie Scott Pilgrim vs. The World, director Edgar Wright teased an announcement related to the film's soundtrack.

Because I was still in bed and hadn't had any coffee, I took the opportunity to have some fun and quote-tweeted Wright. I jokingly asked if the announcement was that the soundtrack will be released "in a re-release of the game." I included a GIF of Mary Elizabeth Winstead, in Ramona make-up and costume, taken from a behind-the-scenes blooper.

I didn't expect Wright to notice or even comment back, and yet he did: "Not that, but we're working on the video game situation...." he wrote.

For those wondering: Wright's real announcement is a re-release of the film's classic soundtrack with previously unreleased songs, including actress Brie Larson's popular recording of Metric's "Black Sheep," which she performed in the movie. But this bonus tidbit of news is an exciting indication that fans of the beat-'em-up video game might one day soon be able to revisit the lost title.

"The Video Game Situation" — The "game" in question is Scott Pilgrim vs. The World: The Game, a retro-style beat-'em-up that has become a cult classic in its own right. Released by Ubisoft in August 2010 and timed to the movie's theatrical release, it's a faithful recreation of O'Malley's comic books, art style and all. Both O'Malley and Wright were involved in its creation, with O'Malley contributing story and art.

Scott Pilgrim vs. The World: The Game was released as a digital download for the Xbox 360 and PlayStation 3 at the time. It was a hit with fans and critics alike who celebrated its thumping 8-bit music and addicting arcade gameplay reminiscent of classics like Final Fight, Streets of Rage, and Teenage Mutant Ninja Turtles: Turtles in Time. In 2014, the game was removed from both the Xbox and PlayStation storefronts with no explanation. The popular speculation was that it had something to do with expired licenses.

In the six years since, fans have demanded a re-release, even organizing petitions to try and make it happen. O'Malley himself has expressed confusion at the game's absence for the last six years.

"I've been saying 'if @Ubisoft ever puts the game out again, I'll be as surprised as you' (you being the typical fan)," he tweeted on Tuesday. "I am my own typical fan in this regard."

Designers of the game told Kotaku on August 12 that the blame lies on publisher Ubisoft and film studio Universal, as the video game was made to promote the movie. “I’d love to see Scott Pilgrim re-released, but I have no idea if it’s ever gonna happen,” designer Jonathan Lavigne said. “We made some efforts to get the ball rolling back in 2016 but it went nowhere. We had Bryan Lee O’Malley and Oni Press on board, but ultimately, it’s entirely up to Ubisoft and Universal.”

The Inverse Analysis — How much things have changed in the last few days since Kotaku published its story and when O'Malley tweeted about the game is unknown. But with Edgar Wright himself now saying something is being "worked on," fans have every reason to hope they'll get to square off against Ramona's evil exes all over again.

For my money, the removal of the game from the digital marketplace reinforces the importance of physical games collection. Scott Pilgrim vs. The World: The Game was among the first wave of digital-only arcade games priced far lower than your average game, and not guaranteed to have a physical release. While some digital titles now receive physical releases, they remain a niche market for collectors, leaving many games available only when corporate overlords allow it to be so.

Scott Pilgrim is an example of what happens when the gatekeepers decide to withhold a game from its ravenous audience — but why?

The Scott Pilgrim vs. the World movie celebrated its 10-year anniversary on August 13, 2020.