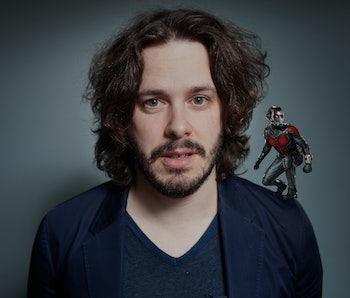 When news broke that Edgar Wright was leaving the Ant-Man production in May of 2014, fans were shocked that the beloved director of Shaun of the Dead and Scott Pilgrim vs. The World would walk away from his decade-long passion project. Now, while promoting his new soon-to-be hit film, Baby Driver, Wright revealed that he still has bad blood when it comes to everything related to Ant-Man.

“I haven’t seen it and I haven’t even seen the trailer,” Wright said in an interview with Uproxx this week. “It would kind of be like asking me, ‘Do you want to watch your ex-girlfriend have sex?’ Like, ‘No, I’m good.’”

If Wright sounds like a bitter, resentful ex-boyfriend that left his previous relationship on bad terms, that’s because it’s an accurate representation of what’s happened.

When he and the Marvel Studios parted ways, it was “due to differences in their vision of the film.” These kinds of irreconcilable differences between visionary directors and big-budget studios were also recently cited when Chris Miller and Phil Lord who recently parted ways with the production of the Han Solo spin-off film.

Here’s a trailer that Wright’s never seen for the movie he’ll never watch:

“When I was still doing that movie” Wright said, “in the back of my head, I thought, well, maybe if I do this franchise movie and it does well, I’ll have enough muscle to get Baby Driver made. Because I had already written the Baby Driver script at that point.” So it would appear that Baby Driver was the girlfriend he wanted all along anyway, one he could actually get with after that nasty breakup.

Seems like things mostly worked out, as Baby Driver, is getting rave reviews ahead of its June 28 release. It’s the first flick he’s released since wrapping up the delightful Three Flavours Cornetto trilogy with The World’s End in 2013.

Way to get back in the saddle, Edgar Wright.